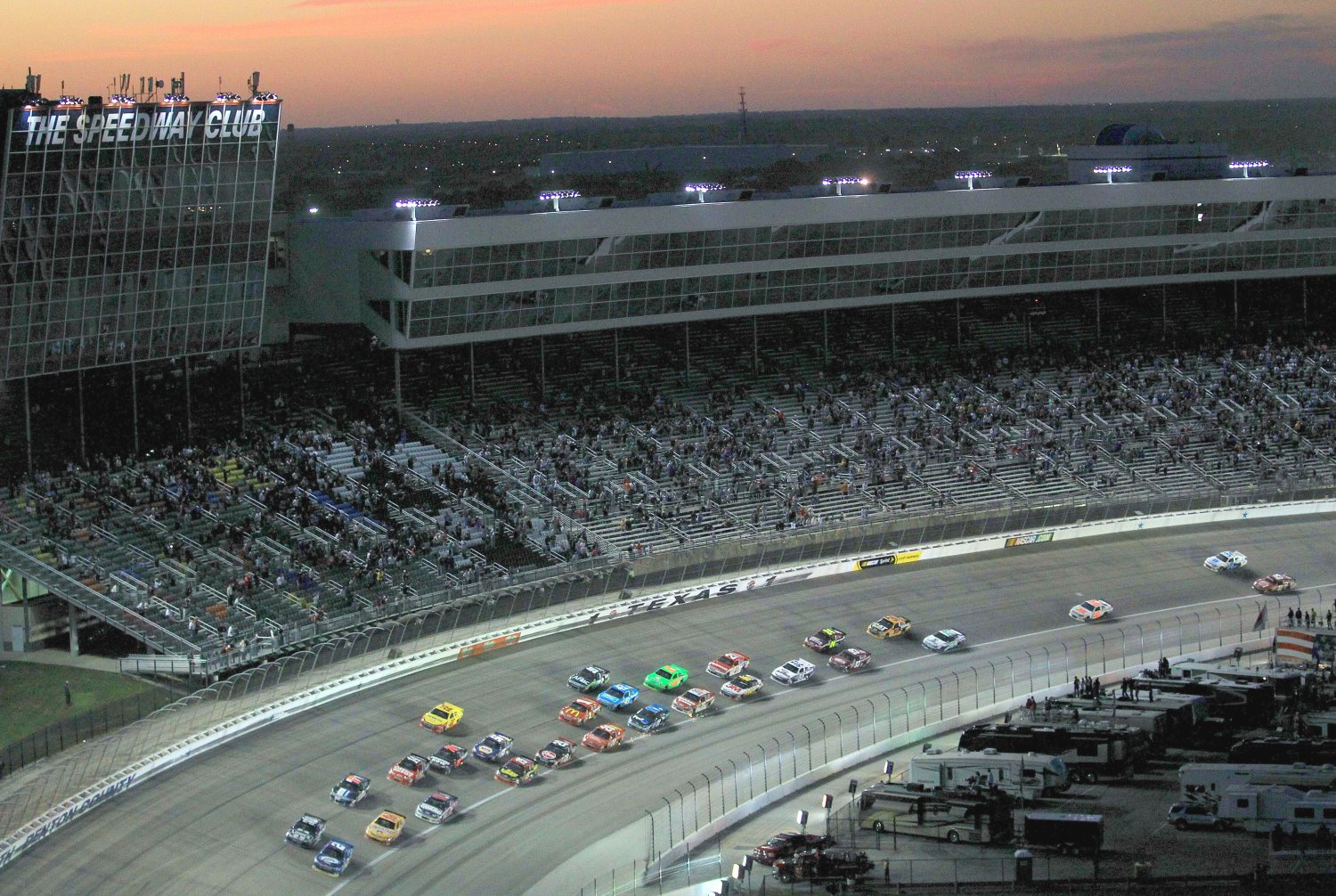 In the waning moments of last Sunday's AAA Texas 500 we learned that our two championship contenders were very capable of getting aggressive without losing their sense of class. We saw further evidence that the #48 team is in traditional championship mode. We saw two cars hit each other after the Nationwide Series race and then watched a parachute strike a car before the Sprint Cup race. With those thoughts in mind, let's begin with.

THUMBS-UP. Jimmie Johnson picked up win number five at Texas and his 60th career win. This #48 Hendrick Motorsports #48 team is looking more and more like six time champions. In a period of three weeks Johnson and company has moved from second, seven points down, in the standings to first, two points ahead, to now seven points ahead of championship rival Brad Keselowski. Johnson more than earned the right to wear the Texas sized cowboy hat, and fire those six shooters, in victory lane.

THUMBS-UP. The finish of this race between Johnson and Keselowski was stunning. There was plenty of door to door racing, and at one point even some side swiping, but the action never got out of hand. One driver could have easily taken the other out but they chose not to do that and it showed class under stress.

THUMBS-UP. This race had all the makings of becoming another, annoying, fuel mileage event. Fortunately for the fans, but unfortunate for some of the competitors, three yellow flags within the final 22 laps of the race prevented that and the result was the exciting finish.

THUMBS-UP. After the race, Brad Keselowski came to the Texas victory lane to shake Johnson's hand and congratulate him. That was a very classy thing to do. Later, during the SPEED Channel's "NASCAR Victory Lane" program, Kyle Petty wanted to know if Keselowski waited until Johnson put down the celebratory guns before he approached him.

THUMBS-UP. Winning team owner Rick Hendrick brought a personal good luck charm to the Texas race. NASCAR Hall of Famer Junior Johnson was team 48's special guest on their pit box. Hendrick quipped: "we'll take all of the knowledge we can get."

WHAT'S-UP. The television ratings for the AAA Texas 500 were, to say to least, disappointing. Reports from the A C Nielsen Company indicated that 3.943 million watched the broadcast on the ESPN Network. That's a considerable drop from the 2011 figures of 4.726 million. That's likely because this race really didn't display very much excitement until the final half hour of the broadcast.

WHAT'S-UP. Prior to the start of the race, Kevin Harvick's Chevrolet was parked on pit road when it was struck by, of all things, a 20 pound sandbag attached to a parachutist who was flying the Texas flag during the pre race festivities. It seems the parachutist was a little off center from his designated landing spot. The result was the sandbag placed a large dent on the driver's door of the race car. Richard Childress Racing pulled to car to the garage area and spent a frantic 30 minutes making repairs. This is one of those once in a life time moments we may never see again. It also brings a new definition to the racing term "sandbagging."

THUMBS-UP. In the aftermath of the Texas race, NASCAR finally eliminated drivers Kevin Harvick and Dale Earnhardt Jr, 11th and 12th in the Chase standings, from championship contention.

WHAT'S-UP. A lengthy mathematical formula used by NASCAR says there is still a numerical chance that a miracle could place one of the remaining ten Chase drivers in the championship profile. NASCAR fans are a little more realistic than that. The NASCAR Sprint Cup Chase for the Championship is a two man race and has been for a month now.

THUMBS-UP. The Nationwide Series championship took a dramatic turn at Texas. A come from behind effort by Ricky Stenhouse Jr led to a second place finish compared to points leader Elliott Sadler's 11th place finish. The end result is the two drivers are now tied for first with two races left in the season.

WHAT'S-UP. There was a rather tense moment between drivers Denny Hamlin and Austin Dillon after the Nationwide Series race. The result was an angry Hamlin pinned Dillon's car up against the frontstretch wall during the post race cool down lap. The angry scene soon moved to pit road where members of both teams lined up to face each other. They actually looked like they were lining up for an old fashioned square dance. The quick arrival of NASCAR officials and national TV cameras quickly deterred the volatile situation. However, as the crew members squared off, I couldn't help but wonder if any of them were thinking W-W-T-S-D, (What Would Tony Stewart Do)?

WHAT'S-UP. The final comment of the week involves yours truly who experienced a very silly moment during Sunday's NASCAR Sprint Cup race at Texas. ESPN aired a live radio transmission from Kyle Busch who told his crew chief: "I have too much rotation in the center." My first immediate thought was: "I wonder if a jock strap would fix this?" Then I imagined a crew member tossing a jock strap through the driver's window in the midst of a four tire stop. By now I was out of control laughing at the thought of a driver trying to install a jock strap on pit road while trying not to lose a lap. Needless to say all of this happened during a very tedious moment of the race. Fortunately, the race had that exciting finish and I became serious again.