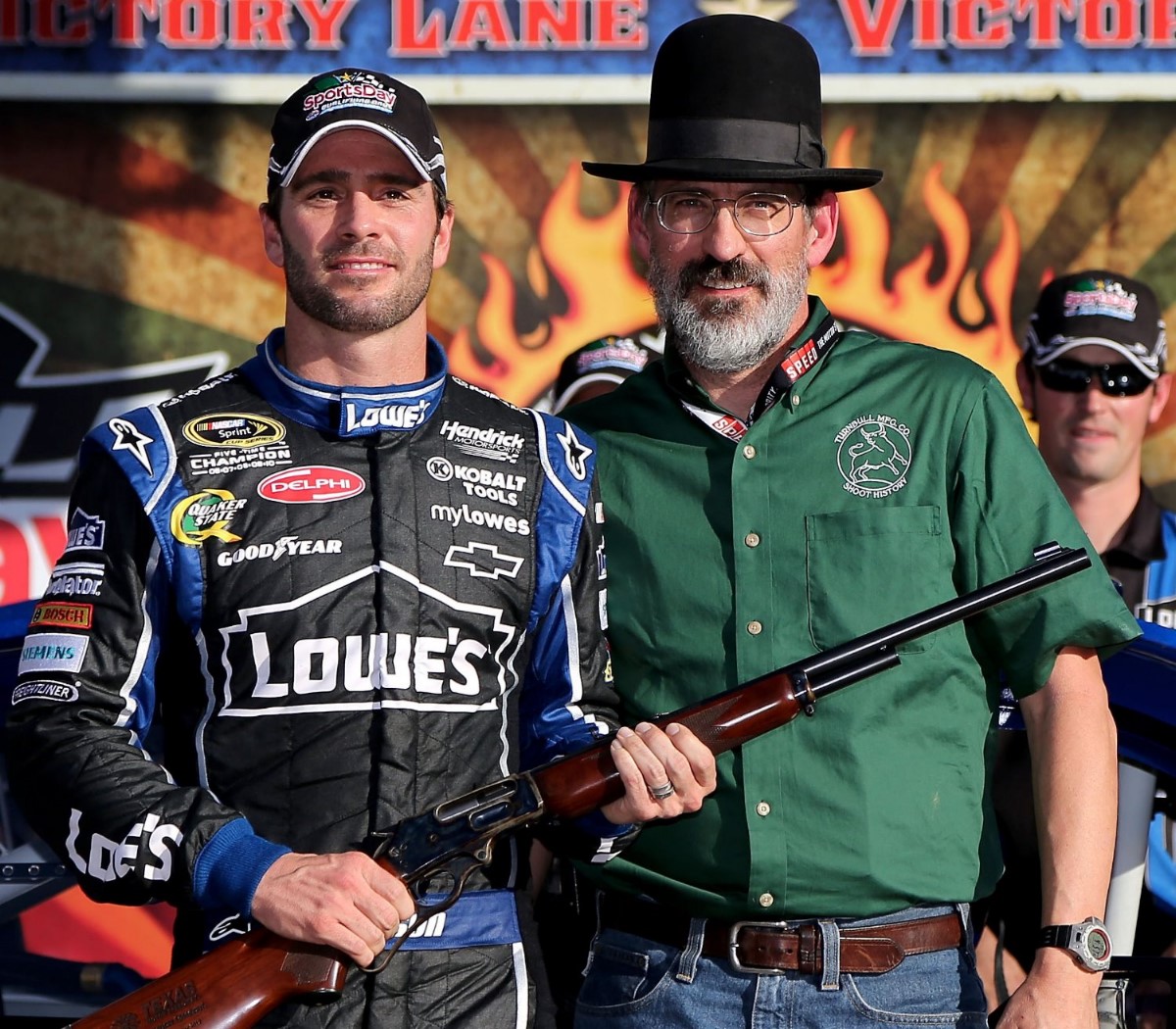 Jimmie Johnson delivered a deflating blow to Brad Keselowski by winning pole position for Sunday's Sprint Cup Series race at Texas Motor Speedway. But it was how he did it that hit him where it hurts.

Ranked just 27th in Friday afternoon's practice session, Johnson gave his competitors a false sense of security. Then, he put down a of 191.076 mph around the 1.5-mile oval to earn the No. 1 starting spot for the AAA Texas 500.

Keselowski, his nearest competitor, will chase him from the eighth starting spot. On Friday he watched Johnson win his second consecutive pole and third in the eight Chase for the Sprint Cup races.

"That was a white-knuckled lap," Johnson said. "I'd say I didn't leave anything on the table with that one. There were a couple of opportunities to lose control.

"I stayed on the throttle and kept the car pointed in the right direction."

Johnson, who has a two-point lead on Brad Keselowski with three races left in the season, will get his choice of pit stall and have everyone chasing him Sunday afternoon. Green flag is scheduled for 3:16 p.m. ET.

"The pole, as you get closer to the end of the year, they feel like they mean a little bit more," said Johnson, who was just hoping for a top-10 position.

"But it's just another pole — not saying that in a negative way. But the benefits that come with it are the same that you would have at any other track.

"We have 500 long, grueling miles on Sunday. So we won a battle today but the larger battle is definitely on Sunday."

MOST GUYS WHO MAKE QUALIFYING RUN MOSTLY BACKUP WHAT THEY DID IN PRACTICE, YOU PICKED UP 3/4 OF A SECOND, WAS THAT MOSTLY DUE TO HOW WELL YOU UNLOADED OR IMPROVEMENT IN THE CAR?
"For that big of a chunk, it had to be both. We ran a flat in our first lap on the track. A lot of guys ran, I think like a .20 or .30 was the fastest. So at the end of the practice session and we put stickers (tires) back on, we ran a flat again. And guys went from running their .20s and gave up four, five, sixth tenths, and we maintained. So, we knew we closed the gap. We did make some smart changes to the car that picked up the rest. We ended the session balance wise in the ballpark. Just didn't have that first lap under cooler conditions to show where we were."

DID YOU THINK YOU HAD A TOP-10 CAR, OR DID YOU THINK YOU HAD A SHOT AT THE POLE? DOES WINNING THE POLE HERE MEAN ANY MORE THAN WINNING THE POLE LAST WEEK OR WINNING THE POLE AT CHICAGO? "I really felt like top-10 was the goal. When I heard the lap time, I was way impressed. I think the pole here in the spring was a .30 and it was probably cooler, and to be down in the .20s, I was really pleased with that. We exceeded expectations in qualifying. A top-10 was really the goal going into it, especially with our seeding process, we felt like going out as early as we did, the guys later would have a bigger advantage, and pick up some speed on us. We definitely exceeded expectations. As you get closer to the end of the year, they feel like they mean a little bit more. But, it's just another pole. Not saying that in a negative way, but the benefits that come with it are the same that you would have at any other track. We have 500 long, grueling miles on Sunday, so we won a battle today. But the larger battle is definitely on Sunday here at the track. Hopefully all of these battles that we are winning right now will total up to winning the war at the end of the year."

CAN YOU CONFIRM IF YOU ARE SUPERSTITIOUS?

WHEN YOU TURNED THAT LAP, DID YOU THINK YOU WOULD BE SITTING IN YOUR CAR FOR 35-40 MINUTES, AND HOW WAS IT? "I was ready to get out, and my engine tuner stuck his head in the car and said 'Hey man, you are going to be sitting here a long time this week'. And I went 'Oh yea, that is right. I'm not superstitious, but I'll sit here'. And, I sat there. It doesn't mean anything, but may as well. At this point in the season, you have to pull out the stops. It gives us a nice talking point I guess through it all. (LAUGHS).

IF YOU WERE CHASING A GUY FOR A CHAMPIONSHIP AND THAT GUY THREW UP A LAP LIKE YOU DID TODAY, WHAT WOULD YOU THINK? "It's funny, because when you run really well, you build confidence in your own head, and around your team about how things went. And we'll certainly do that in the No. 48 (team) if we qualified 10th, we would have went 'Hey, that met expectations of what we thought we'd get. Good job'. 25th would be 'Hey, it's just qualifying'. So, long story short, every team will put a spin on it to help themselves, and to help get over it. I mean, I don't think the No. 2 (Brad Keselowski) qualified all that bad. I think he's in the top-10. Truthfully, if you're in the top-10 each week, you eliminate so many more issues on the race track. You have a good pit stall pick, decent air, and that's really the goal we are all shooting for. Getting poles are pretty special, and we got a good one today, and in a timely point in the season. Us racers will find a way to put the spin on it we need for any given situation."

YOU SAID LAST WEEK AFTER MARTINSVILLE TALKING ABOUT WHAT HAPPENED TO DENNY HAMLIN THAT KIND OF STUFF CAN BEFALL EVERY TEAM. YET THEY NEVER SEEM TO BEFALL YOU OR REALLY HENDRICK (MOTORSPORTS) VERY MUCH EITHER. I KNOW YOU HAVE NEVER DRIVEN FOR ANOTHER TEAM, BUT DO YOU HAVE A SENSE OF WHY YOU GUYS CAN AVOID THE QUALITY CONTROL STUFF THAT SEEMS TO AFFLICT OTHER POWERHOUSES IN NASCAR?
“You know electrical stuff is really sketchy. That is what I was saying last week too. I mean it really can happen to anyone. We look at the issues the No. 14 car had earlier in the year some electrical stuff with the mapping and the EFI (Electronic Fuel Injection) with the car. It happened to him which is Hendrick (Motorsports) stuff, but it didn’t happen to the other teams and I don’t know why the perfect storm happened for his car it was a Hendrick (Motorsports) component and all that stuff that had the issue. So, mechanical we feel much more in control all the race teams do of the mechanical parts and pieces. Ron (Malec, car chief) is so meticulous, our shop is, and all the way through that is one thing that starting with Chad (Knaus, crew chief) on through the guys that nut and bolt the car. They are raised in a culture where we can’t have mechanical failures. Parts break and that is a risk we all run, electrical stuff is always scary to me and I think the highest risk because a lot of those components we don’t assemble ourselves. We take them out of a box and put them in a car. You lose a lot of control doing that. The mechanical pieces we have worked hard over the years to try to build everything that NASCAR will allow us to because then we can perform our own quality control procedures on things. Make sure and understand why stuff works and doesn’t work. So I think there is a lot of detail and knock on wood we get through the end of the year clean."

FOLLOWING UP ON THAT I CAN RECALL BLOWN ENGINES THROUGHOUT THE YEAR, BUT IN THE CHASE YOU DON’T SEEM TO HAVE THESE MECHANICAL ISSUES. CAN YOU RECALL A MECHANICAL ISSUE IN YOUR CHASES WHEN YOU HAVE BEEN THE CHAMPION?

“In 2006 we had a spark plug fail at Loudon. We were running around on seven cylinders, maybe it wasn’t the plug; it was the boot or the plug, something with it I was on seven cylinders. Then tangled up with Sterling Marlin and crashed in turns one and two and have that DNF (did not finish) or poor finish. I don’t remember if we finished or not. That’s the first one that comes to mind, but again knock on wood we and I’m not superstitious. We have very focused group of guys that from a mechanical stand point do a great job of making sure stuff isn’t falling off the race cars. It’s what we pride ourselves on."