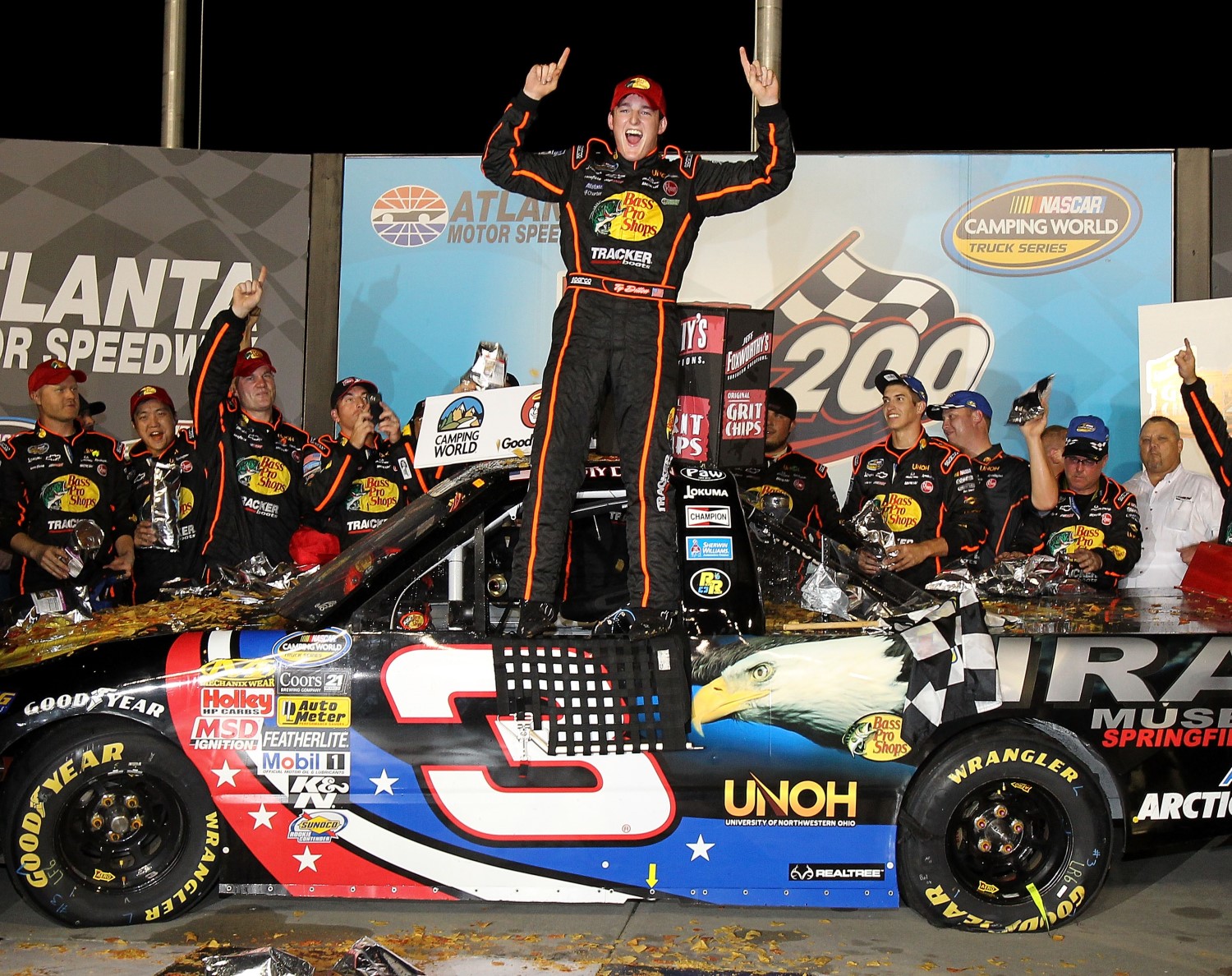 For Ty Dillon to win his first career NASCAR Camping World Truck Series race, he had to do what no one else could do on Friday night at Atlanta Motor Speedway – catch Kyle Busch.

Proving that nothing was going to keep the third-generation rookie driver from his first NASCAR victory, Dillon rallied from nearly one second down to catch Busch and make the pass for the lead with six laps to go to collect his first NASCAR checkered flag in his 17th truck series start and give himself a much need boost in the championship points standings.

Busch held on for a runner-up finish, followed by James Buescher, Parker Kligerman and Aric Almirola.

Dillon’s victory was the perfect remedy to take the bad taste out of a disappointing 21st-place place finish last week at Bristol after Dillon ran out of gas in the closing laps.

“I’m so happy and so excited, and I finally did it, I won a NASCAR race," said Dillon. “My whole life has revolved around NASCAR and RCR and our team. My whole dream was just to win a race in NASCAR and eventually maybe one day become a champion. I accomplished one of my goals tonight; it just feels so great.

"I'm just so happy for how hard we've worked. It's our rookie year, and we're battling for the championship. My team doesn't give up."

It was truly a team effort – and a family effort – with Dillon seeking the advice of his brother Austin, father Mike Dillon and his grandfather and car owner Richard Childress on how to get around the difficult 1.5-mile quad oval he had never raced on before.

“I couldn’t be more prouder than what he accomplished tonight," said Childress. “To watch him race, and watch how he kept searching for the groove and moving around…he looked like he was a pro out there."

For Kyle Busch, making his first truck series start in nearly a year, Friday night’s race was definitely the one that got away.

Busch had more than just the truck to beat – he flat out stomped on the field for nearly the entire race, leading eight times for a race-high 75 laps, but a late caution flag with 25 laps go wiped out Busch’s lead and seemed to give the leaders some hope of maybe catching Busch on a restart.

Thanks to winning the pole position, Dillon took full advantage of having the first stall on pit road to beat Busch out of the pits and into the lead on lap 110.

On the restart, Busch managed to side-draft Dillon on the inside line and powered past into the lead again, eventually opening up a one-second cushion and seemingly on his way to an easy victory.
Dillon didn’t see it that way.

Chipping away at Busch’s lead, Dillon finally closed the gap and tracked down Busch as they came through turn two with six laps to go. Busch drifted high, making contact with the wall, giving Dillon clean air to move out to a half-straightaway lead.

Busch continued to struggle in the closing laps, brushing the wall several times before gathering it back up and soldiering to the finish line nearly three-and-a-half seconds behind Dillon.

It was not the way Busch wanting to finish out his return to the truck series, nearly a year after an on-track incident with Ron Hornaday at Texas Motor Speedway led to a one-race suspension from NASCAR.

“They were just a better truck; they had a lot better handle on the bottom of the race track than we did, especially throughout the longer runs," Busch said. “Then when it’s time to race, a guy catches you and you’ve got to go up to the top, and you try to push and you get sideways and get into the fence. There’s no room to catch it up there. It was all I could do to try to push as hard as I could; I didn’t have anything to hold onto.