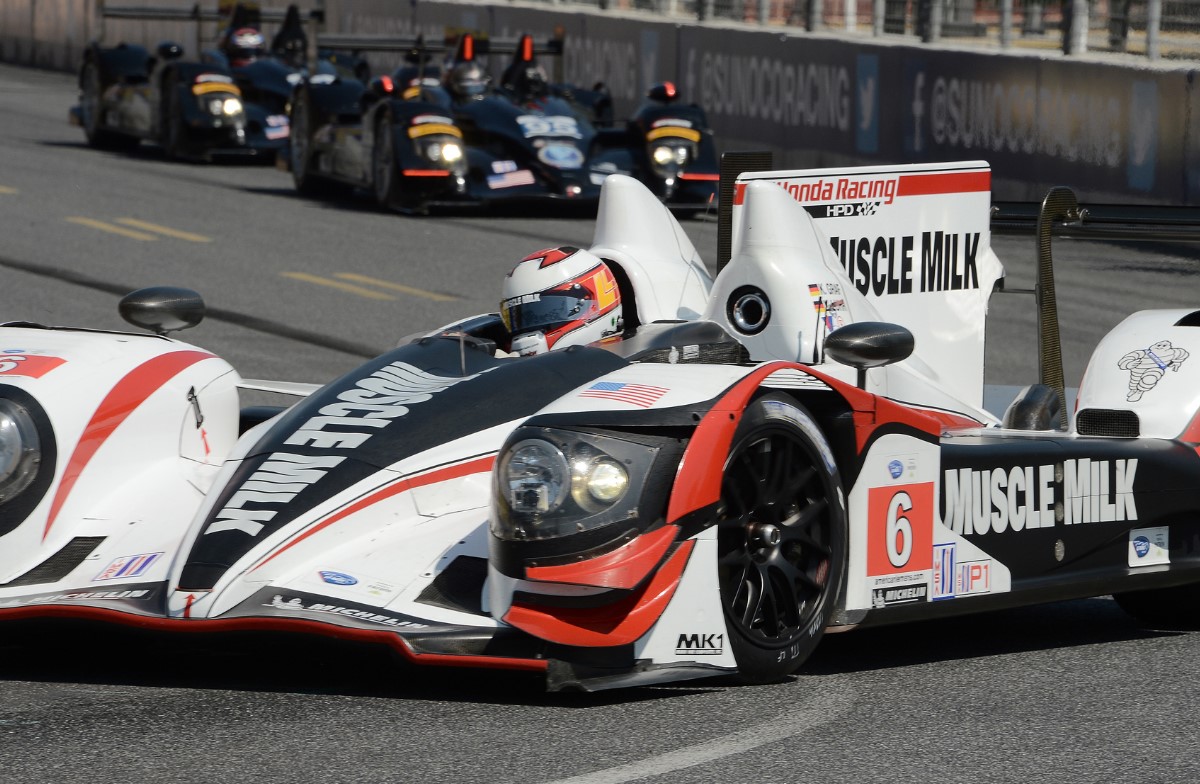 After narrowly missing out on victory two weeks ago in the American Le Mans Series presented by Tequila Patron, Muscle Milk Pickett Racing’s Lucas Luhr took pole position for the Baltimore Sports Car Challenge presented by SRT on Friday. The German set a time of 1:25.174 (86.223 mph) in his No. 6 Honda Performance Development ARX-03a prototype.

Luhr and Klaus Graf saw their five-race win streak end in the last ALMS round at Road America. The P1 championship leaders are eager to get back on the right foot.

“It is really good for us – the series, the drivers," said Luhr, who is racing in Baltimore for the first time. “I like racing on city circuits, and I think this is the best city course I have driven. It is very nice. But there are a lot of bumps. It was almost like the car didn't like me and it was trying to throw me out. We will massage the car a little bit tonight and see what she has in the morning."

In the afternoon practice and qualifying, teams faced the addition of a temporary chicane exiting the final corner meant to reduce the speeds over a particularly bumpy section of the frontstretch. Luhr was one of the quickest learners as he went 0.740 seconds faster than Dyson Racing’s Guy Smith and the No. 16 Lola-Mazda.

Smith and Dyson beat Muscle Milk at Road America and are the main challengers in the P1 title race after winning the 2011 championship.

“I think we are going to see a tough race tomorrow. With the heat (which is expected to reach the mid-90s), it won't make it any easier," Luhr said. “It will be important to get a good start, but you're never going to win a race in the first corner. Passing will be difficult because the track is not very wide, and the GT cars are very quick. You can't just cut through the field; you have to work together, there will need to be give and take."

Oliver Gavin turned Corvette Racing’s fortunes around in a big way with the GT pole position. After his No. 4 Corvette C6 ZR1 suffered a smashed tailpipe and body damage following a run-in with a prototype hit him in the day’s second practice session, Gavin turned a lap of 1:29.945 (81.650 mph) to take his first ALMS pole position of the season. The Briton was 0.382 seconds clear of Bill Auberlen in BMW Team RLL’s No. 55 BMW M3 GT.

Jan Magnussen qualified third in class in the No. 3 Corvette, just 0.468 seconds off Gavin’s pace.

“We had to run with a bent exhaust for qualifying. So Jan wants that setup on his car for the race tomorrow," Gavin quipped. “The Corvette is pretty strong, so I wasn't concerned about structural and suspension damage. And the motor was running fine, so it didn't seem to be a problem."

Gavin and Tommy Milner enter with the class championship lead, Corvette Racing leads BMW Team RLL in the team standings, and Chevrolet has the edge on BMW for the manufacturer crown. Naturally the goal for this weekend – more than any other – is for drivers to keep their cars off the walls and out of the tires. That goes double for any championship contenders.

“Win it; that’s the best way to go about the championship race," he said. “You need a lot of luck on any street circuit. Everyone is racing out there, but they are racing against the circuit. They're trying to keep it on the ground too; (the track is) so bumpy and so aggressive. You have to not have any incidents with anyone."

A last-lap flyer by Christophe Bouchut put Level 5 Motorsports on the P2 pole position. The Frenchman set a time of 1:27.119 (84.298 mph) in the No. 055 HPD ARX-03b he shares with Scott Tucker on the last of his 10 laps. It was good enough for a 0.080-second advantage over Conquest Racing’s Martin Plowman. Bouchut’s first laps with the temporary chicane came in qualifying.

“We changed a lot of things on the setup just before qualifying so I didn’t know exactly how it was going to be," said Bouchut, who leads the P2 championship with Tucker by just five points over Plowman and David Heinemeier-Hansson.

“We are very close in the fight," Bouchut said of the battle between Level 5 and Conquest. “The competition is so very close. Everyone in our class does so well, we always have to be on the limit. The difference was a tenth; on this track that is almost nothing."

Level 5 didn’t race last year at Baltimore, and Ricardo Gonzalez (Diaz’s teammate) competed here last year. The team has had to learn a lot in a short period of time.

“The track is really interesting," Bouchut said. “It is very hard, one of the hardest in my whole career. The straight line is the worst part; the other places are very good and challenging. When you are alone, it is already dangerous. If you put all of the other cars around it can be very tricky."

Doing double-duty this weekend is no problem for Bruno Junqueira. The Brazilian star took his second Prototype Challenge pole position of the season for RSR Racing. He turned a lap of 1:27.464 (83.966 mph) in the No. 9 ORECA FLM09 he drives with Tomy Drissi, who won the PC race last year.

“Junky" also is running in the IndyCar Series race at Baltimore. In ALMS qualifying, he outpaced CORE autosport’s Ryan Dalziel by 0.077 seconds and Colin Braun by 0.330 seconds. The top five cars were within 0.814 seconds.

“I’m in cars a lot," Junqueira said. “You have to completely change your mind-set when you are moving between the two cars. They are very different… night and day."

RSR’s starting position is in limbo, however. Junqueira appeared to break the rear suspension coming out of the temporary chicane when the left-rear of the ORECA slapped the outside concrete wall. Even with the hit and the broken car, he still went fast enough to knock Dalziel off pole position. Even more impressive is that Junqueira started his final lap with a bent steering wheel after he brushed another wall.

“I gave it everything I could," he admitted. “The car was dragging and I knew I had to keep going. I was lucky to finish the lap and keep it on pole."

Damien Faulkner took his fourth GT Challenge pole position of the season for Green Hornet Racing in the No. 34 Porsche 911 GT3 Cup. The Irishman turned a lap of 1:1:35.493 (76.906 mph) in a topsy-turvy affair that saw four cars take turns with the fastest time of the session.

Faulkner was 0.624 seconds clear of Alex Job Racing’s Leh Keen and another 0.295 seconds better than JDX Racing’s Michael Valiante. Faulkner admitted he surprised himself with the pole position given the scarce time he had on track during Friday’s practice sessions.

“I think I had one lap with the new chicane before qualifying," said Faulkner, who drives with Peter LeSaffre. “It was nerve racking; we had less than 15 laps all together this weekend. The Green Hornet team put together a great car out of the box. We haven't touched it since it came off the truck."

Keen’s teammate Cooper MacNeil leads the class driver’s championship over Faulkner and Peter LeSaffre. AJR is ahead of TRG and Green Hornet in the team championship. Faulkner knows that time is short if he and LeSaffre want to make a move. MacNeil and AJR hold the largest championship leads of all the five classes – with the exception of CORE’s championship clinch in PC.

“We can't seem to collect the points on Saturday," Faulkner said. “So we need to keep clean tomorrow and hopefully it can come back to us and get the payday. The biggest challenge is the bumps. You're just trying to hold on to the cars for all you’re worth. We run the highest ride height of all the classes, so we're riding around a bit like a bus."

The Baltimore Sports Car Challenge presented by SRT, the eighth round of the ALMS championship, is scheduled for 4:30 p.m. ET on Saturday, Sept. 1 on the temporary street circuit in Baltimore's Inner Harbor. ABC's broadcast begins at noon ET on Sunday, Sept. 2. Full, live coverage starts at 4:15 p.m. ET on ESPN3.

The Series' website offers additional content such as live in-car cameras, and timing and scoring for all users around the world. Viewers outside the U.S. can watch the Baltimore round and all ALMS races live on ALMS.com.