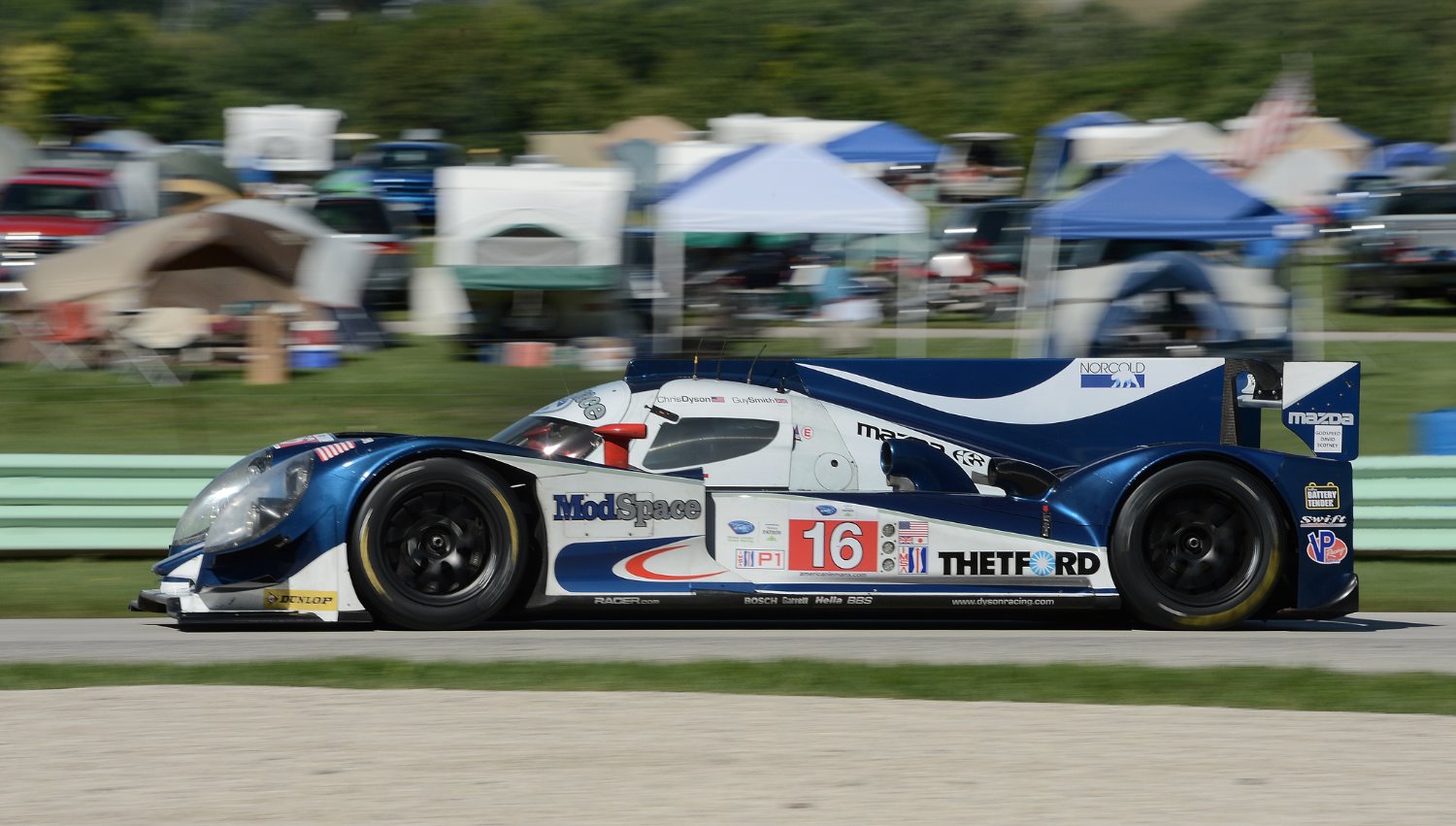 No matter how you cut it, it’s nothing short of astonishing that two races lasting a little over eight hours could be decided by such minute increments of time.

Now consider two additional increments of time: 10 days and 23 weeks. The first is the number of days Dyson Racing had to prepare its brand new Lola B12/60-Mazda for the start of the 2012 season after taking delivery of the car a month behind schedule. The second is the amount of time that elapsed between Dyson’s class-winning debut at Sebring and its second win of the season … at Road America.

Needless to say, it’s been a long 23 weeks for Poughkeepsie, NY-based team.

“It’s been a season of ups and downs, fortunately more ups than downs," says Chris Dyson. “We needed a win to keep us in the championship, and it came at the right time.

“It’s a morale boost; it’s a boost in competitiveness for us in the championship. We’re not under any illusions that we don’t still have a lot of work ahead of us in the next three races, but at the same time it does put a little extra wind in everyone’s sails. Winning is never a problem."

Sometimes, however, you have to take a half-step forward to move a step or more forward and give yourself a better chance of winning. That was the case following a 2011 season that saw the team take two wins, five poles and no less than five championships (Driver's, Team, Engine Manufacturer, Tire and MICHELIN GREEN X Challenge) in their Mazda-powered Lola B11/66.

“We figured coming off last year that, while we had a good package, we needed to push the game forward," Dyson explains. “At the same time the Lola guys had shown some promise with Rebellion in Europe, with their package; they made a nice step forward and they were looking to move forward again with the aerodynamics to optimize the symmetrical tire configuration; and also in our case to optimize the light weight Mazda engine, which is the lightest engine of any sports car in the world right now."

A key feature of the new Lola is that it utilizes symmetrical tires (i.e. the fronts and rears are the same size), playing into Dyson’s partnership with Dunlop, which was looking to advance its symmetrical tire program. But what nobody figured on was taking delivery of a new car little more than a week before the Mobile 1 Twelve Hours of Sebring … and coming to grips with its idiosyncrasies without the benefit of preseason testing.

Although a week-and-a-half of all-nighters and a virtually untroubled 12-hour run produced an ALMS P1 win, there was no underestimating the challenges of the ALMS season to come as Dyson competed with a Muscle Milk team running its tried and true (and fast) HPD ARX-03a which suffered a fueling problem at Sebring while leading the class.

Indeed, the Muscle Milk team set the pattern for the season when it loped home some 43s clear of the Dyson and Smith at Long Beach. Then things got even more challenging when Lola announced it was entering into “financial administration" – a British financial euphemism that translates into “filing for bankruptcy" in American-ese. No matter the language, the net result was that Dyson Racing was more or less left on its own – sans factory support – to proceed with development of the B12/60.

Although Smith snatched the pole at Lime Rock, Luhr and Klaus Graf won the race by 12s and returned to the top of the podium at Mosport (I mean Canadian Tire Motorsport Park) and Mid-Ohio. After the pole at Lime Rock, the Modspace Lola-Mazda was 2.1s off the pace in qualifying at CTMP before trending upward at Mid-Ohio where it qualified just 0.696s adrift of the Muscle Milk entry.

"The Lola situation was very unfortunate," says Dyson. “When we committed to this package, the last thing we expected was for that company to implode the way it did. Thankfully, as a team we have been able to transcend a situation that was entirely outside of our control. We still have many friends and a great supplier base in this industry, and we have been able to push forward with our development program and secure ample spares, despite the headaches created by Lola.

“Thankfully, our Mazda-AER engine is so good, so reliable that we’ve had zero powertrain issues," he continues. “All of our work has been isolated to optimizing the chassis and developing the tires which are a departure, conceptually, from what we’ve had in the past.

“Where we’ve struggled a little bit is that we’ve been trying to get a balance on the car that we the drivers want, where when you put transient inputs into the car – braking, steering feel; those are the areas we’ve focused on because everything grows off the confidence of a driver being able to hit the brakes, turn in and give it throttle. If you make all those events seamless, everything else gets easier.

“With this car and the symmetrical tires, I think some issues have cropped up that maybe we didn’t anticipate, that Dunlop didn’t anticipate … but we’ve all been working our tails off to try to get the car to the point where we can optimize the additional rubber that’s on the road; and to optimize the packaging – the aero balance, the weight balance."

They’re still not where they want to be. After all, the stage was set for the team’s dramatic Road America win when the Muscle Milk HPD experienced mechanical problems and came back from four laps down (with the help of some timely full-course yellows) to nearly win the race. Then again, Dyson charged from last on the grid to second place in the opening nine laps after suffering gearbox problems in qualifying.

What’s more, despite being outscored by Muscle Milk in the win column, Dyson Racing is still very much in the ALMS P1 championship picture. With three races remaining, they are 12 points adrift of their Muscle Milk rivals. Twenty points go to winners this weekend at Baltimore, and there are 46 points available over the final two races.

“It’s taken us longer than expected to get our hands around this package," Dyson says. “But we’re now at a point where the car is getting to be nice to drive, more consistent. Clearly we’re still at a disadvantage to the relative pace of the HPD, but we’re making up ground and we’ve just been paying the price for the package being delivered late.

“The good thing is we’ve been scoring. We haven’t been as fast as we’d like. We haven’t been harrying these guys for race wins, but we’re still scoring and at the end of the day, so much of this championship is decided on reliability."

Better yet, the remaining three events may play to Dyson Racing’s strengths. Recall the team’s two cars qualified on the front row and finished one-two last year at Baltimore, and took another P1 win at Petit Le Mans. And while the ALMS has no recent history at Virginia International Raceway, dust off your record books and you’ll find that Chris Dyson teamed with Andy Wallace to win the first top-level professional sports car race following the historic circuit’s resurrection.

“It’s going to be interesting," Dyson says. “With the Baltimore circuit being changed a bit, it might well play to our strengths, opening up the configuration a bit with some more fast parts. We were very fast at Baltimore last year … and I think we have a very good baseline.

“We tested at VIR in June and the car felt pretty good. We’ve made a nice step with the tires since then and we should be reasonably competitive. It’s another four-hour race and I think the longer races, for Guy and I, are our strong points; just being able to bang a lap in, be consistent and the team executes brilliantly in those long-distance events. So I feel really good about the next three races."

Just in time, perhaps, to grab another ALMS title for Dyson Racing.

David Phillips is one of North America's most respected and renowned motorsports journalists, having been featured in AutoWeek, RACER and other prominent motorsport magazines. He will be a regular contributor to ALMS.com.