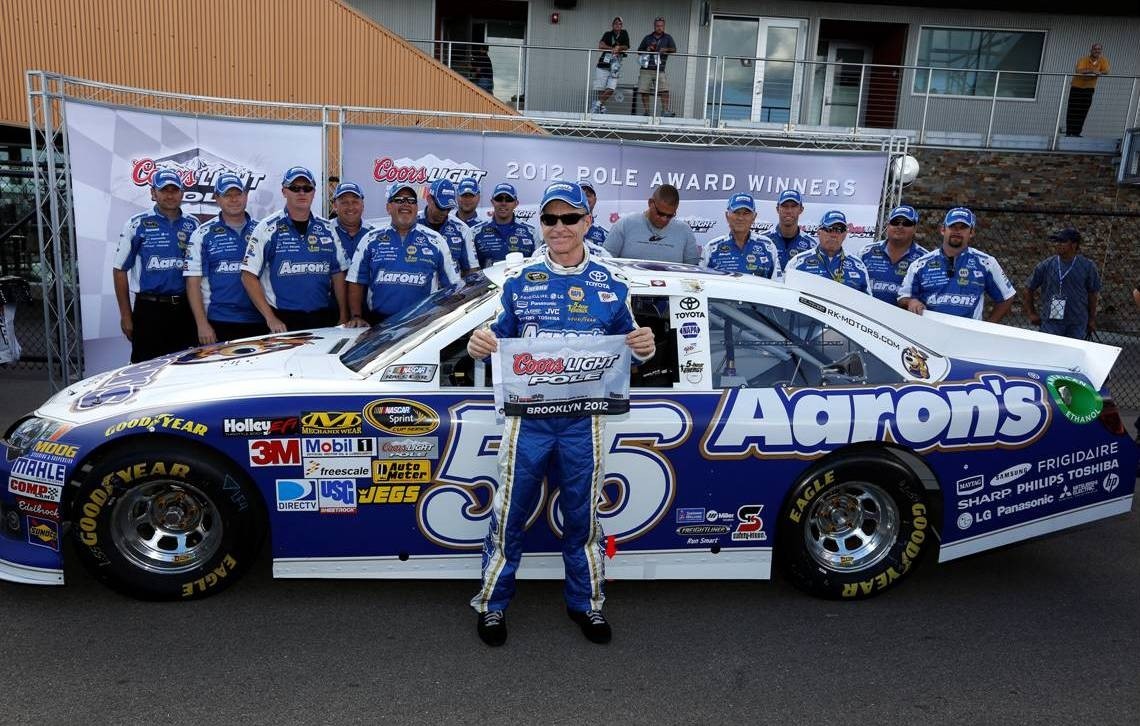 Mark Martin knows that there are hundreds of variables in auto racing but he proved once again that age isn’t one of them Saturday at Michigan International Speedway.

Martin, at 53 the oldest current competitor in the NASCAR Sprint Cup Series, won the pole position for Sunday’s Pure Michigan 400 with a speed of 199.706 MPH. He nudged former teammate Carl Edwards off the top of the qualifying list. Edwards posted a speed of 198.626 and will start second.

Martin was the third-to-last qualifier. It was his 55th career pole, tying him with Billy Elliott for seventh place on the all-time series pole list. It was also Martin’s fourth pole this season, despite the fact he’s driving a limited schedule in the Aaron’s Dream Machine Toyota for Michael Waltrip Racing.

“I had no idea it was a pole run but I had a good feeling about the race car," said Martin, who has five career wins. “I certainly gave it everything I had. I really stretched the limits of my talent level qualifying in one lap.

“It’s great when you drive a race car as fast as that when you feel you have, what I believe, is the fastest race car for the day."
Martin said he, too, was surprised at the feat.

“In this business I don’t expect results, I expect effort," he added. “The one thing you will get from me is every ounce that I can find and you’ll get that no matter what the result might be. I just feel that this is a very lucky time in my career and my life because I get to race on my terms and do things the way I want to do them."

Martin left most of his compatriots shaking their heads in wonderment, especially Edwards who was also a late qualifier and felt somewhat enthused about his chance of gaining the pole.

“It’s pretty amazing, especially at his age," Edwards said. “He’s an inspiration to me as to how well he can do over such a long period of time. I had Mark Martin toys when I was a little kid. There are generations of people who have all had little Mark Martin toys. Who knows, my kids, some day, might be racing against the guy. He can probably bench press more than all of us, go faster than all of us. He’s a spectacular guy."

Johnson registered the fastest practice time Friday with a speed of 197.450 MPH, but eight drivers surpassed that during qualifying, including Johnson, the third-fastest qualifier at 198.440. He was followed by brief pole-sitter Matt Kenseth, Kasey Kahne and Trevor Bayne.

“Qualifying, historically, is not my bag," Johnson said. “I’m very happy with my effort and I wanted to be a little faster and get the pole but it was just a great day and nothing to complain about."

“What keeps him going is his love for the sport," Johnson said. “He’s a racer through and through. We all know his dedication to fitness and nutrition and that’s what keeps him sharp and at the top of his game at 53 years old. And you can’t take out the fact that the guy has a ton of talent. That’s why he’s Mark Martin."