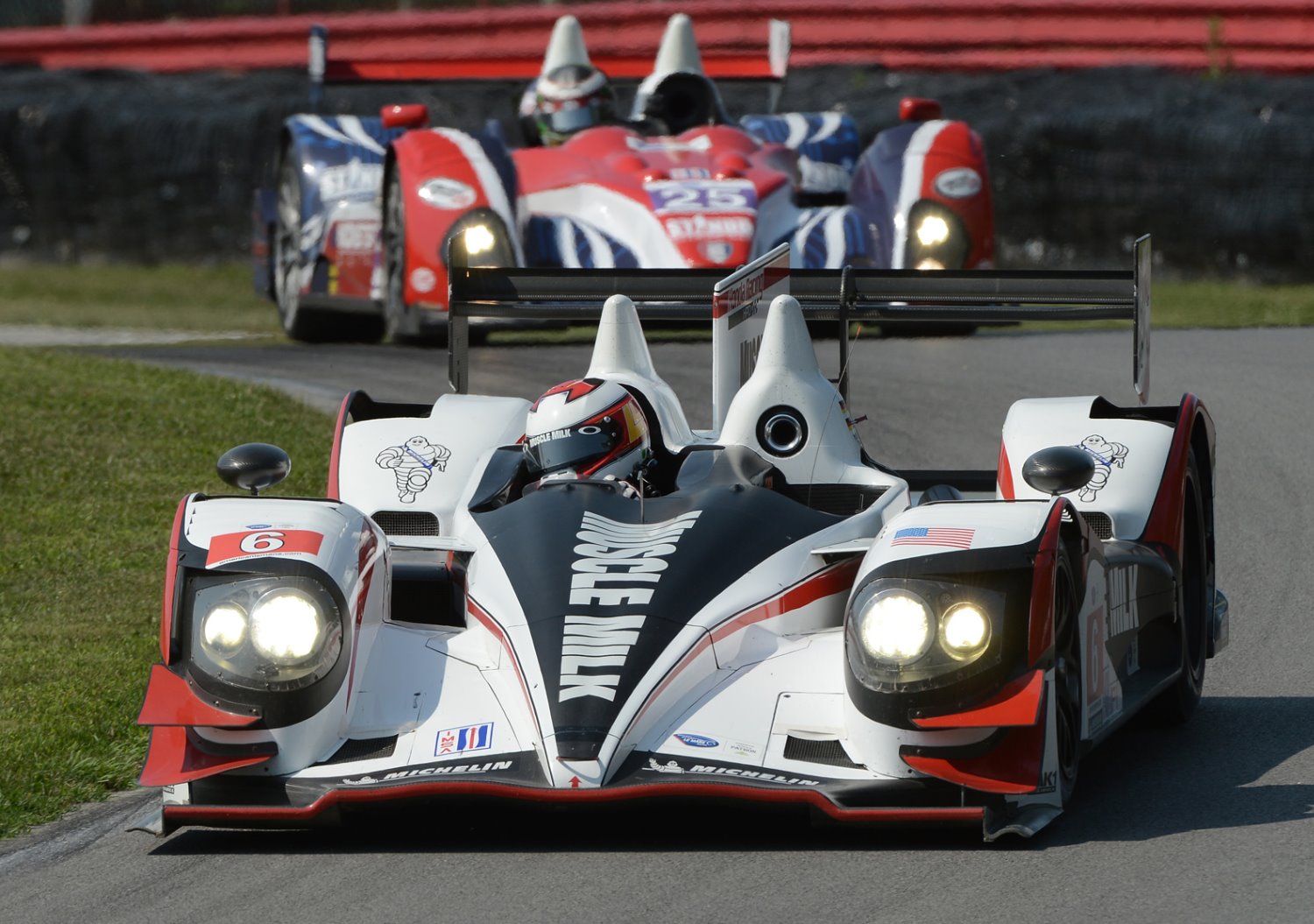 Graf set a qualifying time Friday of 1:50.191 (132.250 mph) in Muscle Milk Pickett Racing’s No. 6 Honda Performance Development ARX-03a he shares with Lucas Luhr. The pairing ride a five-race winning streak and share the P1 championship lead after six rounds. Graf and Luhr won last year’s Road America race by 0.112 seconds in the closest finish in ALMS history over Chris Dyson and Guy Smith – their chief competitors then and now.

“We always want to compete at the best level – to our own standards," Graf said. “We never look to the competition. If you win five races in a row, it's easy to look back and level off. But we never do that."

And they can’t afford to in the championship picture. Despite winning five straight races, Graf and Luhr lead the title chase by 16 points. Class winners at this weekend’s four-hour race earn 22 points.

“If you look at the length of the track, you would think that traffic wouldn't be bad," Graf said. “But in fact it can really mess you up in the long run. In the past, fuel strategy was the main key to winning this race. We have to keep in mind the championship situation, even though we approach all of the races the same."

Marco Holzer picked a great time to claim his first career pole in the ALMS. The German set a lap of 2:04.415 (117.131 mph) to set a GT qualifying record at Road America in Flying Lizard Motorsports’ No. 44 Porsche 911 GT3 RSR. Holzer was more than a second quicker than Dirk MÃ¼ller’s record from last year in a BMW M3 GT.

“It's an unbelievable day for me," said an almost bewildered Holzer. “The car was fantastic. This Porsche is working very well for us. The new aero (a new spoiler and air ducts that appeared at Mazda Raceway Laguna Seca) are making the car go that much faster in the corners."

The Lizards qualified 1-2 for the first time in ALMS. Jorg Bergmeister set a time of 2:04.428 (117.118 mph) in the No. 45 Porsche – a gap of only 0.013 seconds. Twice, Holzer saw Bergmeister eclipse his qualifying time only seconds after the No. 44 crossed start-finish. Finally on Holzer’s third lap, he set a time that Bergmeister couldn’t match.

“We tried to have both cars go as fast as we could for one lap," Holzer said. “Then we tried making it go quick for a stint. I have to thank the team for giving me such a good car. The last lap, my right leg started shaking; I was so flat out the entire time."

Corvette Racing’s Oliver Gavin was third in the No. 4 Corvette C6 ZR1, just 0.456 seconds behind Holzer. The top seven cars were within 0.673 seconds and all under the old record.

Martin Plowman has made his first visit to Road America a memorable one already. Conquest Endurance’s young ace driver took the P2 pole position with a lap of 1:54.218 (127.588 mph) in the No. 37 Morgan-Nissan. It was enough to take pole by 0.189 seconds over Level 5 Motorsports’ Christophe Bouchut.

“It's a pretty special place," said Plowman, who drives with David Heinemeier-Hansson. “I drive the track a lot in iRacing where you can go flat out on cold tires. But in real life you have to blink and collect yourself. This is epic – one of the iconic tracks of America and really fun to drive on."

The Conquest squad must be hoping that Plowman’s second ALMS pole position ends the same way as his first. He qualified first at Canadian Tire Motorsport Park and went on to win the race in a stellar late-race duel with Bouchut. That was the first victory for Conquest, Plowman and Heinemeier-Hansson and ended Level 5’s four-race unbeaten streak from the start of the season.

“I believe even if we have 15 cars on the track, Level 5 would be the car to beat," he said. “It’s fun to race against them and when we do, I know they are the best."

Kyle Marcelli took the Prototype Challenge pole position for Merchant Services Racing with a lap of 1:57.172 (124.371 mph) – also a class record. He beat out a two-time Le Mans 24 Hours class winner (Tom Kimber-Smith), a former Champ Car star (Bruno Junqueira) and PC pole- and race-winner from the most recent ALMS round (Marino Franchitti).

“It's always hard to put together a perfect lap," said Marcelli, who drives the No. 8 ORECA FLM09 with Chapman Ducote and David French. “(Road America) is a fast circuit and you have a lot of time to think. We had a car that is working so well for us. I told my engineers it was a perfect qualifying car, but we'll need to make some adjustments for the race."

“I think everyone is going to be giving it everything they've got," Marcelli said of the star-studded PC field. “The cars have been proven to be reliable. There are some nasty rumble strips on exits you have to be cautious of, but this place is unique. Yes it's a four-mile track, but you can have issues with traffic. If you catch a car in the wrong place, it can really ruin your entire lap."

Jeroen Bleekemolen took his second GT Challenge pole position at Road America in three years – this one for Alex Job Racing. The Dutch driver posted a record-breaking lap of 2:12.773 (109.757 mph) in the No. 22 Porsche 911 GT3 Cup he drives this weekend with class championship leader Cooper MacNeil. It was 1.294 seconds under Sean Edwards’ previous record lap from 2011.

Bleekemolen was 0.031 seconds clear Friday of Green Hornet Racing’s Damien Faulkner, a three-time GTC pole-winner this season. Faulkner’s No. 34 Porsche qualified just ahead of Patrick Huisman in the No. 33 Green Hornet Porsche; Huisman set a lap of 2:13.339 (109.291 mph). In fact the five fastest cars in the class were under Edwards’ time from last year.

“It seems every class is beating the record," Bleekemolen said. “(The temperatures) are cooler, so we have a lot of power in the engines. It will be a fight in the end again, for sure. We have four or five really strong cars where the lap times during the race will have two- or three-tenths of a second in difference."

Bleekemolen already is a two-time winner in class this season – once with TRG and another with JDX Racing, and he won last year at Road America. Teammate MacNeil won at Lime Rock in July.

“Last year I went from third to first in the last three corners to winning it," Bleekemolen said. “(Saturday) will be exciting for sure. The system with the yellows helps keeping the racing closer."

The Series’ website offers additional content such as live in-car cameras, and timing and scoring for all users around the world. Viewers outside the U.S. can watch the Road America round and all ALMS races live on ALMS.com.