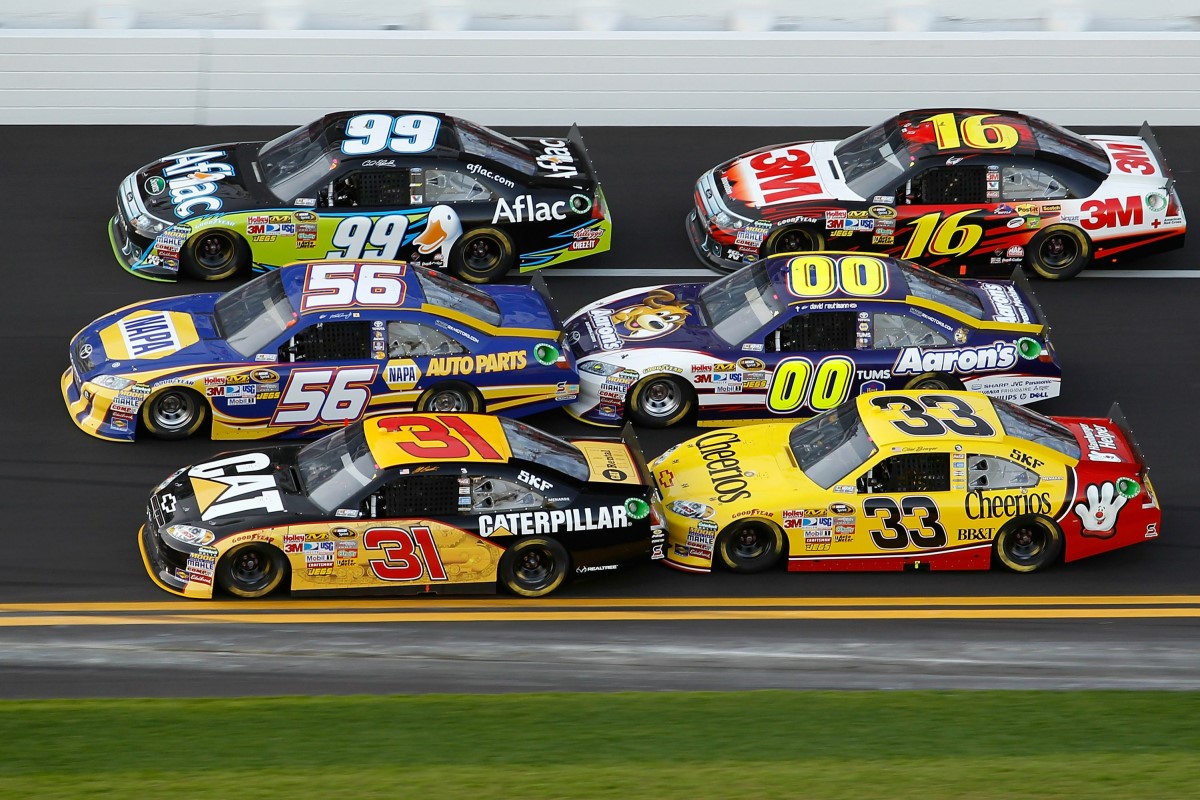 The NASCAR Sprint Cup Series returns to restrictor plate racing this Saturday night at the Daytona International Speedway for the running of the Coke Zero 400. It's expected to be the typical intense event we've seen at this track since 1959.

With this race comes a lot of pre event story lines that will be the focus of the NASCAR themed media coverage. You will certainly hear a lot about the impact this race will have on the Sprint Cup Chase for the Championship. You will hear about what teams needs a win right away and how a first time win could greatly impact the structure of the series' wild card program. The 12 team Chase line up will be determined following the September 8th race at Richmond. Right now, the focus is less on accumulating points from good finishes and more on collecting the possible bonus points that comes with race wins.

You can also expect to hear "unconfirmed" updates on the NASCAR silly season. This of course is led by Matt Kenseth's announced departure from Roush Fenway Racing at the end of this year. The popular theory says Kenseth will be driving a Toyota for Joe Gibbs Racing next year. The only thing he's said about his plans was a vague comment indicating he has a deal for 2013 and beyond with a brand new, full sponsored, team.

However, a major hint came from Jack Roush himself. Many years ago, when Toyota first announced their entry into NASCAR racing, Roush was not too thrilled with the news and referred to them as "the dark side." In recent days Roush made a side of mouth of comment that said "Matt Kenseth is going to the dark side."

A final revelation of Kenseth's plans will allow silly season dominoes to fall for other notable Sprint Cup free agents such as Joey Logano and Ryan Newman. We need to remember something very important here: it is silly season, a process where rumors run wild, and NOTHING is official until Matt Kenseth says so.

To determine which drivers going to drink a refreshing bottle of Coke Zero in the Daytona victory lane, we again turn to the professional number crunchers from the Las Vegas based WSE, World Sports Exchange.

The WSE has a tie at the top of their Daytona standings with drivers Kevin Harvick and Dale Earnhardt Jr ranked at 9 to 1 odds. Harvick is sixth in the championship standing but, surprisingly, is still seeking his first win of the year. He has a good chance of picking up a win Saturday night. He has good numbers at Daytona that includes two wins, five top five finishes, ten top ten finishes and a healthy average finish ratio, (AFR), of 15.

Among the modern area Cup drivers Dale Earnhardt Jr is regarded as being one the better ones when it comes to restrictor plate racing. That factor, along with the fact this team is running so strong this season, is the reason why he's at the top of the WSE charts this week. Earnhardt, now a 2012 race winner, is second in the points standings and only 11 points away from first. He's a two time Daytona winner with none top fives, 14 top tens and a 14.5 AFR. Keep a sharp eye on the #88 Saturday night.

At 10 to 1 odds you will find a quintet of drivers featuring Tony Stewart, Jeff Gordon, Jimmie Johnson, Kyle Busch and Matt Kenseth. Stewart, ninth in the points, is a three time winner at Daytona with seven top fives, 12 top tens and a 16.7 AFR.

Jeff Gordon's 2012 racing luck has been well documented. He's currently win less,18th in the standings and a whopping 180 points out of first. His Chase hopes will now depend on earning a wild card berth. But to do that he's going to need at least two wins between now and September 8th. Daytona is a good track for Gordon and that first win could come Saturday night. Gordon has a series high six wins at Daytona along with 12 top fives, 19 top tens and a 16.2 AFR.

Jimmie Johnson, third in the points, has a previous win at Daytona along with six top fives and nine top tens. However the AFR, 18.2, is a little on the high side. None the less, this is the five time champion #48 team and you never rule them out as race contenders.

Some past engine woes has Kyle Busch 12th in the standings and look for him to launch the process of getting back into the top ten Saturday night. He has a previous win at Daytona along with five top fives, six top tens and a 17.6 AFR.

Series points leader Matt Kenseth has some strong numbers at Daytona and look for him to be a contender Saturday night. Kenseth has two wins there along with five top fives, 12 top tens and a 16.7 AFR.

The WSE has the tandem of Carl Edwards and Brad Keselowski rated at 11 to 1. Edwards, 11th in the points, is yet another driver who surprisingly has not found victory lane this year and is aware that time is ticking away on his Chase hopes. Edwards is also still looking for his first win at Daytona. He has four top fives, seven top tens and a 17.3 AFR.

Here we go again with virtually no stats for Brad Keselowski. He has goose eggs at Daytona. Not even so much as a top ten finish and his AFR is a sky high 27.7. Despite those numbers he's still considered a pre race favorite because, at tenth in the points, he virtually has a lock for the Chase line up due to his series high three wins this year.

At 13 to 1 is the duo of Kasey Kahne and Clint Bowyer both, of whom, have found victory lane this year. Kahne is 14th in the points and, at least this week, has the second wild card berth for the Chase line up. He's still looking for that first win at Daytona. He has two top fives, six top tens and a 17.9 AFR there

Bowyer, 7th in the points, is also looking for his first Daytona win but does have two top fives, six top tens and a healthy 14.8 AFR.

The duo of Martin Truex Jr and Denny Hamlin are rated 14 to 1. Eighth in the points standings, Truex is still looking for his first win of the season and his first win at Daytona. However his Daytona numbers are not very strong. He has only one top ten and a very high 21.5 AFR.

Hamlin has two wins this year and is currently fifth in the points standings. He still seeking his first Daytona win but does have two top fives and two top tens along with a rather high 20.7 AFR. Another distraction here is reported extreme back pain that forced the driver to withdraw from the Nationwide Series race. He still intends to drive in the Cup race Saturday night but it's probably going to be very uncomfortable for him.

Greg Biffle, fourth in the points, is ranked at 15 to 1 to win at Daytona. He's a previous race winner there with three top fives and five top tens. However the AFR, at 20.5, is a little on the high side.

Looking now at the WSE's lower tier for Daytona, Previous winner Jeff Burton is rated at 18 to 1. Multiple Daytona winners Michael Waltrip and Jamie McMurray are ranked at 25 to l, while Kurt Busch comes in at 27 to 1. 2012 race winner, and possible Chase wild card contender, Joey Logano is rated at 28 to 1 as is A J Allmendinger. Ryan Newman, another possible wild card contender, is rated at 30 to 1 and is a previous Daytona winner.

At 35 to 1 is the trio of Marcos Ambrose, Juan Pablo Montoya and previous Daytona winner Trevor Bayne. Paul Menard closes the WSE Daytona report at 37 to 1. If you do not see your favorite driver on this list, then he's automatically rated at 10 to 1 odds.

Now for the disclaimer: NASCAR wants us to remind you that these numbers are posted for entertainment and informational purposes. They neither encourage nor condone the placing of wagers on their races. Having said that, you need the services of the WSE when it comes to a race at Daytona because anything can happen during a restrictor plate race.

The race has 44 entries vying for the 43 starting positions. Nine of those entries are on the go or go home list meaning these teams are not guaranteed a starting berth because they are currently outside of the top 35 in NASCAR's owner's points. These teams will have to rely on qualifying speeds to make the race.

Among the go or go homers is Bill Elliott who has a past champion's provisional available to him that guarantees a starting berth in the race. Elliott will be driving the #50 Wal-Mart Chevrolet. The famed retail giant is on the car to promote their 50th anniversary. The car will also be the official Sprint Cup debut of Turner Motorsports who has had measured success in NASCAR's Nationwide and truck series.

The defending race champion is David Ragan. Matt Kenseth won the Daytona 500 back in February. If Kenseth can win Saturday night he will become only the fifth driver in track history to sweep a Daytona season. He will be joining some impressive company that includes Fireball Roberts, Cale Yarborough, Lee Roy Yarborough and Bobby Allison.

The Daytona International Speedway opened in 1959. The first ever NASCAR race, a 100 mile qualifier was won by Bob Welborn. Lee Petty won the first ever full length race which was the first ever Daytona 500. Since that time there has been 130 Sprint Cup races at Daytona that has sent 56 different winners to victory lane. King Richard Petty tops the Daytona win list with ten. Jeff Gordon leads the modern era drivers with six wins. The legendary Wood Brothers leads the team wins category with 15.

44 Daytona races has been won from the front row with 17 of them won from the pole position. Eight races have been won from starting positions outside of the top 20. Matt Kenseth won the 2009 Daytona 500 from as far back as 39th.

The 2011 Coke Zero 400 created some new Daytona track records. The race had 25 leaders and 74 lead changes. The race also had a record high 16 caution flags along with 60 yellow flag laps.

The Daytona International Raceway is massive. It's 2.5 mile oval has 31 degrees of banking in the turns, 18 degrees in the tri oval, six degrees on the front stretch and three degrees on the back stretch. The front stretch measures 3,800 feet long while the back stretch is 3,400 feet long. The speedway's spacious pit road measures 1,600 feet long by 50 feet wide. The pit road speed is 55 MPH. The speedway has grandstand seating for 168,000 fans.

Weather could be a situation for the Daytona weekend. The Saturday race day forecast calls for a 30% chance of scattered showers and thunderstorms during the day and a 20% chance Saturday night. Otherwise expect partly sunny skies with temperatures in the high 80's. In the event of rain, the speedway has a fleet of jet dryers available that can dry the track in approximately two hours.