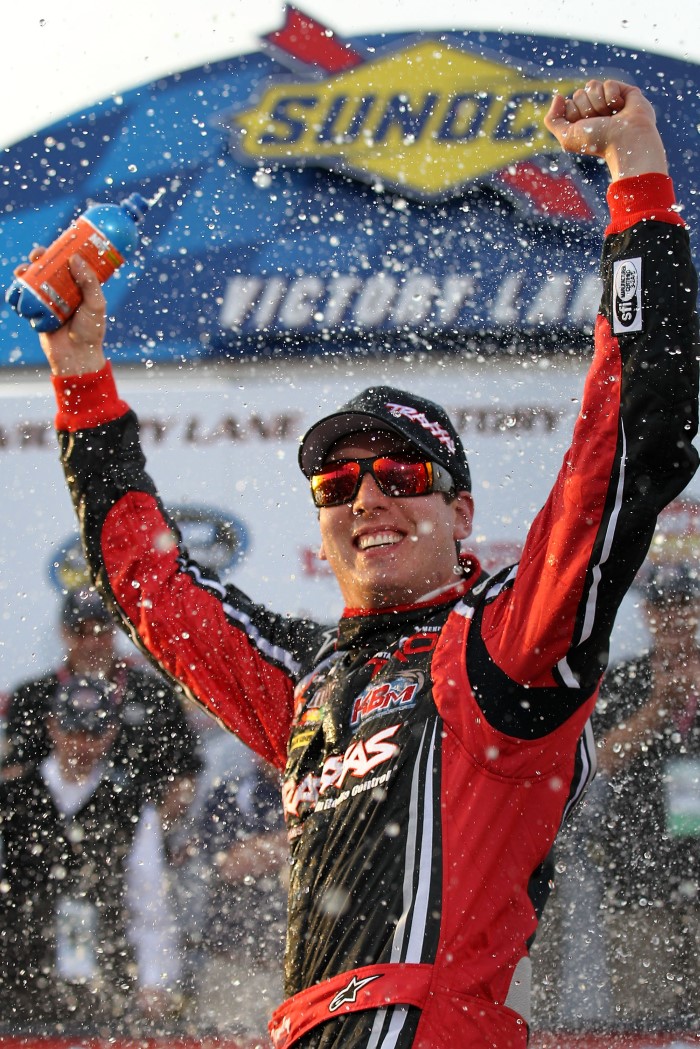 The NASCAR Camping World Truck Series, one of the best tailgate parties in the land, returns to action this Friday night, June 1st, at the Dover International Raceway's one mile concrete covered oval for the running of the Lucas Oil 200.

The pairing of NASCAR's truck racing series and Lucas Oil is a perfect partnership. Since its inception in 1995, the NASCAR Camping World Truck Series has provided years of very aggressive racing that often had fans not using the grandstand seats they paid good money for (in more cases it is free ticket giveaways by sponsors that people do not want to use).

In many cases over the years, the trucks were the opening act for the NASCAR Nationwide and Sprint Cup Series as they will be this weekend at Dover. By the time this NASCAR triple header is over, don't be too surprised if the Lucas Oil 200 turns out to be the best race of the weekend. It certainly wouldn't be the first time that happened.

Lucas Oil Products Inc was formed in 1989, by Forrest and Charlotte Lucas. Like the NASCAR Camping World Truck Series, this Corona-California based company has also been very aggressive in its history. This is especially true in the area of brand placement marketing for its products that includes motor oils and automotive additives as well as marine and motorcycle products just to name a few. From individual sponsorship of race events and teams to the national and regional racing series that the company owns, you would be hard pressed to name a form of motorsports that Lucas Oil has not been associated with.

That aggressive combination is expected to produce some very exciting racing Friday night when the green flag falls on the Lucas Oil 200. This race is 200 laps around an equally aggressive Dover International Raceway's one mile concrete oval. The raceway's turns are banked at 24 degrees that blends into a mere nine degrees of banking on the straightaways. The front and back straights measures 1,076 feet which means drivers have approximately two seconds to catch their breath and relax their arms before it's time to steer through the next turn.

This race will also be providing some highly competitive story lines to follow. First, there's the matter of the series' points standings. California driver Justin Lofton, based on his first ever win at the Charlotte race last week, leads those standings. Last year, Lofton couldn't buy a decent finish in this series at a yard sale. This year, in five races, he has the win and five top ten finishes. However, he only holds a single point lead over Red Horse Racing's Timothy Peters and that's going to be a major story line Friday night.

On the subject of competitive edges, the last five series' races has produced five different winners including three first time visits to victory lane. The last time the series had this much competitive parity was back during the 2005 season.

There's one thing for sure: the Lucas Oil 200 will not have a repeat winner Friday night. 2011 defending race champion Kyle Busch is not entered in this event. However, the famed #18 Kyle Busch Motorsports-Shore Lodge Toyota Tundra is entered with NASCAR up and coming driver Brian Scott behind the wheel who has won at Dover in the past.

The Lucas Oil 200 will also have a visitor in the line up. That would be NASCAR Sprint Cup driver Kevin Harvick who will be driving the #2 Kroger-Tide Chevrolet for Richard Childress Racing.

In past years the SPEED Channel has presented the Dover truck race on a video tape delay basis. For the first time ever, the Lucas Oil 200 will be presented on live television. The SPEED Channel's pre race show, "the Set Up" will begin at 4:30 pm eastern time.

Enjoy the Lucas Oil 200 NASCAR Camping World Truck Series at the Dover International Raceway Friday night. It has all of the potential elements of becoming a very exciting race worthy of the series, its sponsor and the fans.