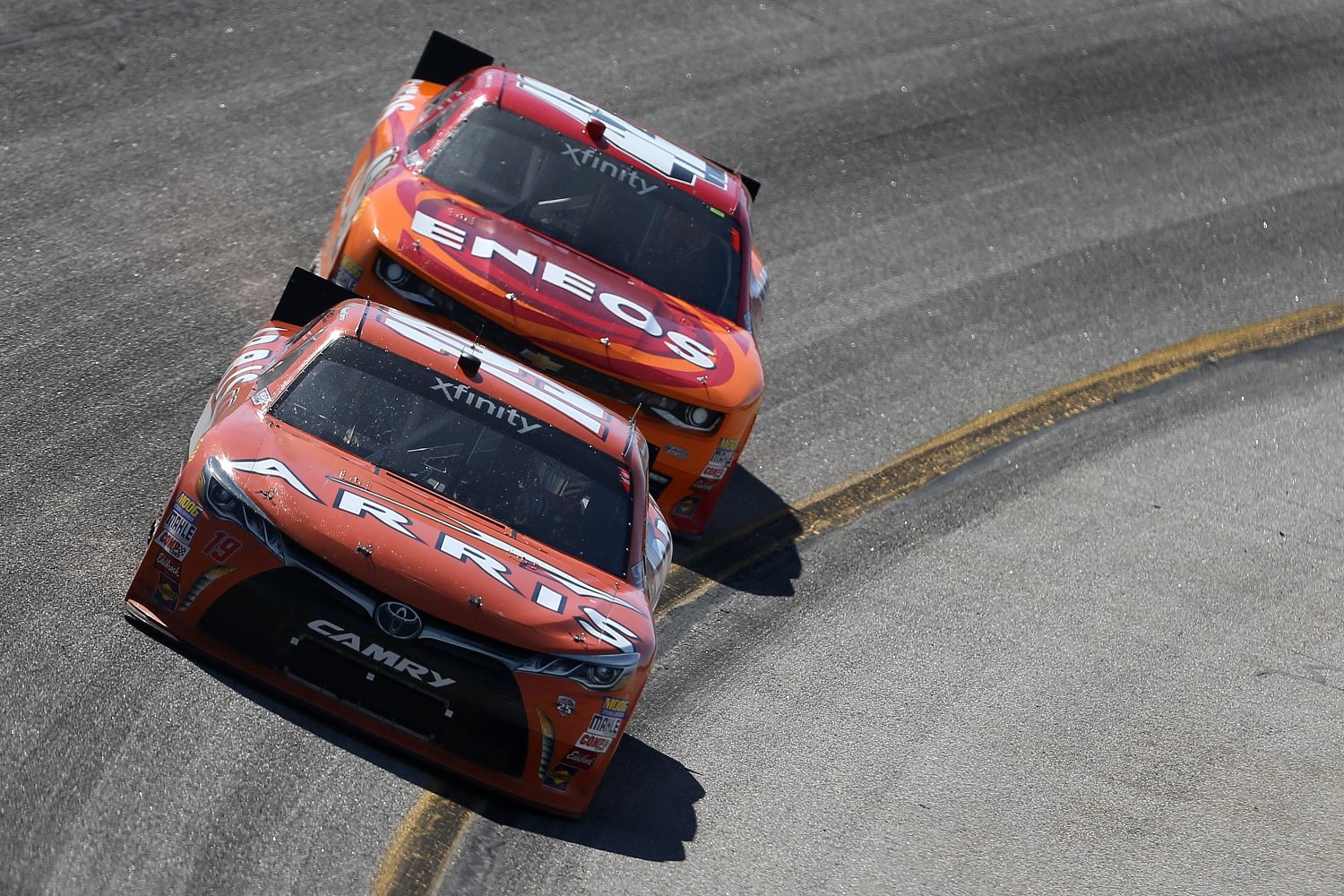 Atlanta Motor Speedway was originally scheduled to repave the 21-year-old surface following the 2017 QuikTrip 500 but that wasn’t what the drivers wanted; still there is major work that needs to be done as the track has cracks and crevices – nearly the size of a racecar – that need repairs.

The delayed repave is something track president, Ed Clark, said is inevitable and costly. However, until that day comes, which could be following the 2018 event, huge chunks of the track must be dug out and patched over. It was something they found after he and his staff walked the entire track the day after the race.

"Some of them probably won’t be the full width of a car but most of them will likely be the length because a lot of the unraveling we’ve seen is along the seams in between runs of the asphalt," Clark told Kickin’ the Tires, during a meeting at the track on Tuesday. “That’s where you get your first cracks and as time goes by they just seem to erode out from the sides. Some will be that wide but the majority of them, I hope, will be no more than maybe three to four feet wide."

Clark said it was a little-known fact that speedway officials patched the track following the Xfinity Series race earlier this year. There were several cracks that had become larger during that race and something had to be done before the Monster Energy NASCAR Cup Series cars hit the track the next day. Despite the need for the repairs Clark said he thinks the track will hold up, unlike when large potholes developed at Daytona International Speedway that had to be fixed with Bondo a few years ago.

“Most of those (cracks) were there before we started the event," he said. “We actually had to patch a couple of places Saturday night after the Xfinity race, this year. We don’t have any concern or fear that chunks are going to come out of the track. It is more a bit of gradual unraveling as the event goes on that happens as a small crack becomes a wide crack. But, you know, the drivers have said, ‘we can live with that. We like the surface as it is and we are willing to deal with that, if it occurs.’"

Clark said the one that might play into repaving sooner, rather than later, is if a driver goes out and takes away any competitiveness by completely dominating the race. That was the case this year and why some fans didn’t believe the racing was good.

“Kevin Harvick, kind of, stunk the show up a little bit," Clark said. “Really dialed in, you know, that is a rarity, I think, today but he was leading the bulk of the laps. Personally, and I know we have received comments from the fans, they would have liked have seen a little more competitive racing.

“I think, probably, that if we had another event like that next year, that would certainly play into the consideration and decision regarding repaving."

Whether AMS is repaved after next year’s race or if track and Speedway Motorsports Inc. officials decide to push it back, yet again, one thing that will be done are tire tests prior to any NASCAR event on the new surface. Clark said he has already secured a guarantee from Goodyear because, Atlanta Motor Speedway, “is probably the toughest track on the entire NASCAR circuit" that Goodyear has to produce a tire for and there have been many conversations about it.

Earlier this season, Texas Motor Speedway was forced to artificially age its new track surface in an effort to ensure good racing. Goodyear didn’t have time to conduct a tire test, so there was some trepidation about how wide the racing groove would be and whether the cars could pass each other during the race. Fans don’t like single-file racing.

“I don’t think the new repave here will be a challenge to them (Goodyear)," Clark said. “They were planning to do two tests to make sure they dialed the tire in and weren’t concerned about tire issues when we did repave.

“What we saw at the repave that was done at our track in Kentucky last Fall, or late last summer, and then what we saw at Texas, is we know the machine we run on the surface, and did at Texas even Saturday night, does help widen the grove out right off the bat."

“The tracks aren’t the same, our track is half-mile turns and quarter-mile straightaways," Clark said. “It’s more round than most of the mile-and-a-half tracks, so that is going to make it a little bit more of a challenge because the potential tire issues that Goodyear has to contend with will be even greater here – the G-forces, the side-bite.

“This surface is 21-years-old and it’s brittle and its absolutely worn out and therefore it’s the slipping and sliding that the drivers enjoy. It’s inevitable, it’s not five years away, it’s less than five years away and it could well be after 2018 but it is imminent. It has got to be done. We have got the money allocated, the company picked out and everything is ready to go when that time comes. We don’t have a choice. Nobody wants to repave." Kick'in the Tires