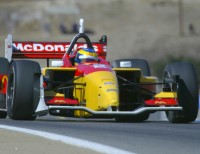 "From the spring in Arizona … to the fall in Monterey." The opening line to Mark Knopfler’s “Speedway At Nazareth," where he describes the state of American open-wheel racing during the glory days of the 80s and 90s.

Back then, the season finale for the CART/PPG IndyCar Series was always held in October at Laguna Seca Raceway. The reminders of those years are memorialized in names like Andretti Hairpin and Rahal Straight, and racing history like “The Pass" at the Corkscrew by Alex Zanardi over Brian Herta. The Monterey Grand Prix was the anchor weekend of the Laguna Seca season, and packed the track and Peninsula with fans from the U.S. and throughout the world.

Championship Auto Racing Teams was the sanctioning body for some of the best open-wheel racing in history. Along with the Indianapolis 500 and some other classic oval races, CART also brought in the disciplines of the best natural road courses like Laguna, as well as temporary street circuits like Long Beach. It took drivers of exceptional ability and courage to master all three. Though huge even then, NASCAR was more of a regional attraction of the South and kept to its bread-and-butter oval tracks, avoiding most road courses.

Formula One was considered the premier open-wheel series in the world and looked at open-wheel cars on oval tracks as pure insanity. As CART ventured offshore to locations in Germany, Mexico, Japan and elsewhere, and with defections of legends like Nigel Mansell and Emerson Fittipaldi, it is said F1 chief Bernard Ecclestone sensed a threat to F1’s dominant status in the world. NASCAR saw CART as an obstacle to achieving status as the premier American racing series that they now enjoy.

Enter Tony George, heir to the Clabber Girl fortune and grandson of Indianapolis Motor Speedway legend George Hulman. There were many purists who harkened back to the USAC days when American open-wheel racing was strictly an oval track series, and never liked the expansion into what was considered a more European style of racing. The Indianapolis 500 was still by far the pillar of the CART season.

George, who was not happy with the control over the series the CART team owners had, listened to voices that said he didn’t need this group and should start a series of his own. Thus was formed the Indy Racing League, and with it the infamous “Split" with CART. With the open-wheel fanbase divided, NASCAR jumped into the void and never looked back. CART, and then the Champ Car World Series held on a few more years, but ultimately left Laguna Seca for the disastrous San Jose Grand Prix street race.

In 2008, the two series finally unified to become the Verizon IndyCar Series. Under new CEO Mark Miles, IndyCar has experienced steady regrowth to the point where drivers, teams, sponsors and fans need not go through each offseason wondering if the series will be able to answer the bell for the coming year. As part of the rebuilding, Miles hired the Boston Consulting Group to assess the series’ strengths and weaknesses and recommend changes.

Probably its most significant recommendation was to have the season end by Labor Day, so as to not have the broadcast package compete with the NFL. With traditional fall dates no longer in play, this has meant that any growth in the schedule must occur in late winter and early spring. As it turns out, the possibilities for non-snow or severe weather venues in the 48 states during this time of year are very limited. Both Las Vegas Motor Speedway and Auto Club Speedway in Fontana do not want races so close to their spring NASCAR dates.

In reality, that leaves only Portland International Raceway and Mazda Raceway Laguna Seca as viable possibilities. Specifically, the date range this year would fall between the March 12 season opener in St. Petersburg and the April 9 Long Beach Grand Prix. In my opinion, if you compare historic rainfall and temperature probabilities of Portland and Monterey during that range, it isn’t even close.

IndyCar is reluctant to bring a race to the same region as the season finale at Sonoma Raceway, but I think it can be persuaded otherwise. As we’ve seen with MotoGP, the main obstacle to Mazda Raceway will again be the sanction fee required. But if city and county governments, as well as hospitality, tourism, restaurant and retail interests present a united front, IndyCar will see that returning to Laguna Seca is in its best interests and that accommodations will be made.

I predict IndyCar will want to announce any new destinations by the end of the 2017 season. Let’s make sure Laguna Seca is in the hunt. Paul Ingram/Monterey Herald