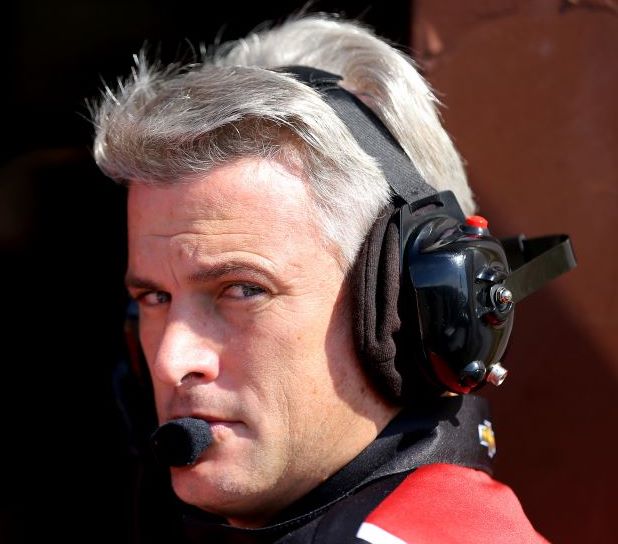 UPDATE This rumor is upgraded to 'fact' today. Richard Childress Racing (RCR) has named Matt Borland as crew chief for its No. 27 Menards NASCAR Sprint Cup Series program. Borland will begin his duties as crew chief at the conclusion of the 2016 season, replacing interim crew chief Danny Stockman.

Stockman will return to RCR's NASCAR XFINITY Series program, where he has won seven races and the 2013 Series championship.

Borland, a seasoned NASCAR engineer and crew chief, brings to RCR more than 20 years of motorsports experience. Most recently, he served as vice president of technology for Stewart-Haas Racing (SHR) where he oversaw the team's NASCAR and Formula 1 operations, while managing its engineering staff of 30. From 2009 to 2016, Borland served in several roles at SHR, including vice president of competition and crew chief. His crew chief record in the NASCAR Sprint Cup Series includes 13 wins, all coming with current RCR driver, Ryan Newman, behind the wheel.

"Matt's experience as an engineer in both NASCAR and Formula 1 will be critically important to the growth of RCR's Sprint Cup Series program," said Chairman and CEO, Richard Childress. "He has an impressive background and will be a great resource to our racing operations.

Borland spent time at Pi Research, a well-known engineering organization, PacWest Racing, Team Penske and Michael Waltrip Racing. He is a graduate of the General Motors Institute and is a native of Big Rapids, Michigan.

"Richard Childress Racing is one of NASCAR's most prestigious race teams with a storied history and I'm thrilled to be a part of this organization," Borland said. "I'm looking forward to working closely with Dr. Eric Warren and the staff of talented engineers and employees. I'm confident my experience in various forms of motorsports will contribute to RCR's continued success on track."

Matt Borland is getting back in the NASCAR game. Motorsport.com rumors that Borland will join Richard Childress Racing. Borland, 45, worked as a crew chief for 10 seasons in NASCAR before he was promoted to Vice President of Competition for Stewart Haas Racing. Borland rose up the ranks with rookie Ryan Newman for one race in 2000 through the A-B-C development program established at Penske.

After a brief stint with Michael Waltrip Racing and Dale Jarrett to start the 2007 season, Borland joined Haas CNC Racing as director of competition and remained through the transition to SHR in 2012.

Newman moved to RCR for the 2014 season and signed a contract extension last month. After his friend's departure, Borland had delved into the engineering end of SHR and shifted his concentration to Haas' Formula 1 project. Motorsport