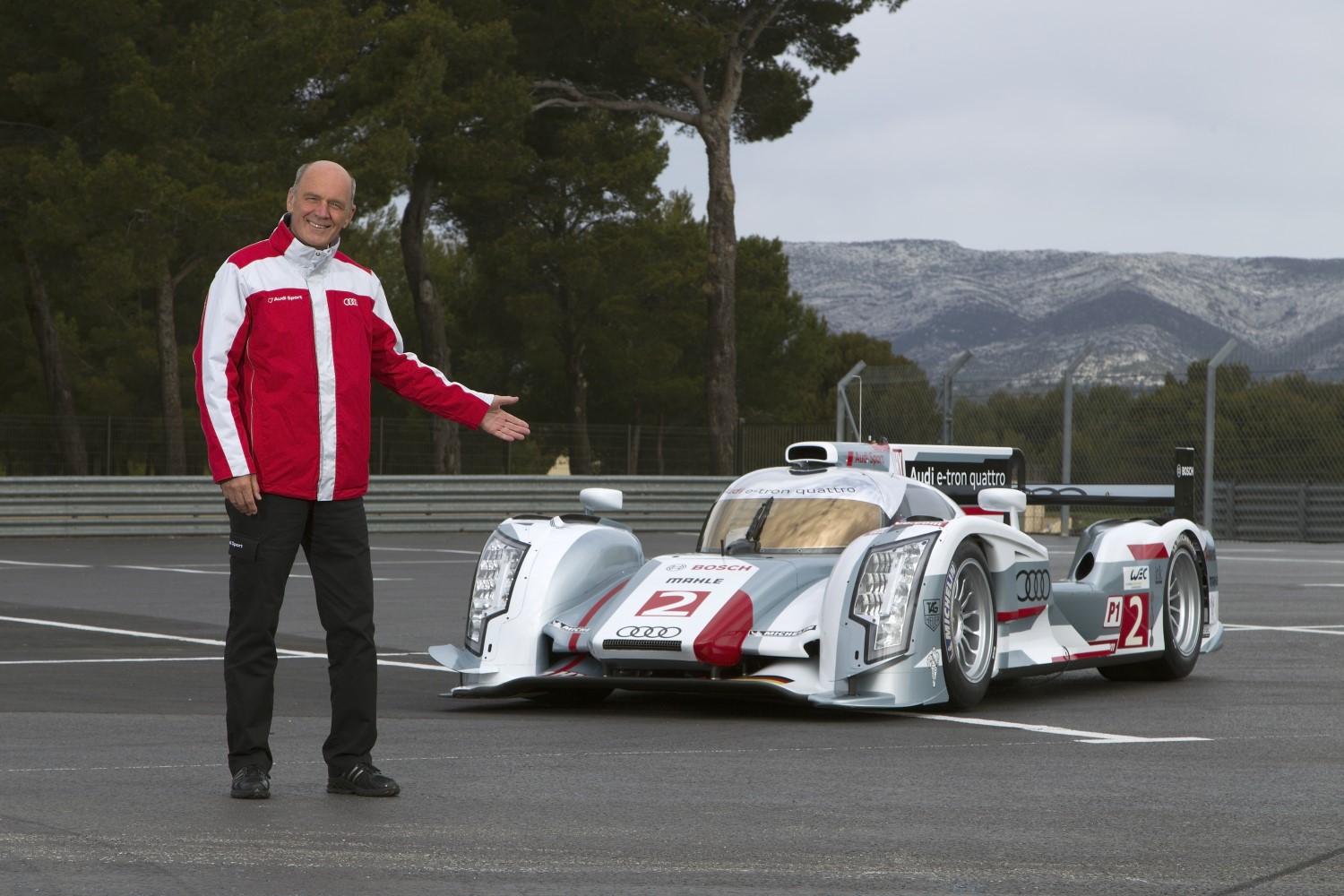 The race debut of the Audi R18 e-tron quattro at Spa-Francorchamps this weekend signifies the beginning of a new era at Audi. For the first time ever, a Le Mans sports car with diesel hybrid drive and two driven axles will compete in a race. For Head of Audi Motorsport Dr. Wolfgang Ullrich, this is arguably the most challenging project in the more than 30-year history of Audi Sport.

Audi previously marked milestones at Le Mans with TFSI gasoline direct injection (first victory in 2001) and TDI diesel power (first victory in 2006). Now, at round two of the World Endurance Championship (WEC) at Spa, the company’s first diesel hybrid sports car will be contesting its first race. The birth of the idea for an LMP vehicle with diesel hybrid power and quattro drive at Audi Sport dates back several years though.

"We started to think about the hybridization of a Le Mans sports car relatively soon after the first TDI successes," reveals Head of Audi Motorsport Dr. Wolfgang Ullrich. "A concrete opportunity for this materialized when it became clear that the regulations would be permitting such an option." In 2008, the Le Mans organizer ACO announced this forward-thinking approach and since 2009 the regulations have expressly been allowing energy recovery systems for LMP1 cars. The complexity of the related tasks is shown by the fact that in 2012 Audi is the first automobile manufacturer to field such an LMP1 vehicle in a race.

As usual, the project at Audi Sport commenced with concept studies. "Naturally, we were again able to benefit from the resources of the Technical Development division at AUDI AG," stresses Dr. Ullrich. "Right from the beginning of the project, we intensively liaised with our colleagues on the production side of the house where concepts are created and examined for future road vehicles. They worked out a solution in which one of the axles is driven by the power supplied by an internal combustion engine and the other by the power from an electric motor. This defines a new form of quattro drive – the e-tron quattro. We’re also pursuing this strategy in racing, which again puts us on the front row. Not only because we’ll be the first at Spa to contest a race with such a concept in an LMP race car, but because production development will be able to benefit from our system in the future as well."

For the R18 e-tron quattro, Audi has developed a concept in which the V6 TDI engine drives the rear axle. On the front axle, the energy is electrically recuperated und fed into a flywheel energy storage system which can return it to the front wheels during acceleration. This means that there is no mechanical link between the front and rear wheel drives. The interaction is completely controlled by complex electronic systems.

"The decision in favor of flywheel energy storage was made based on the specific requirements relating to racing," explains Dr. Ullrich. "That’s also why a battery system is currently out of the question in view of our ultra lightweight design. But I can safely state that the things we’re testing with flywheel energy storage are of interest to our production colleagues too. The combination of different systems is an aspect that will have to be considered in various applications in the future."

An Audi R8 GT provided the base for the first trials. "In the initial phase of the concept development for the R18 e-tron quattro when we wanted to get a trial vehicle off the ground as quickly as possible we came up with the idea of using the R8 GT as the base for it," says Dr. Ullrich. "The implementation was possible at relatively high levels of efficiency and we managed to package all the subsequent original components of the R18 e-tron quattro at the front end of the R8. That’s how our prototype for initial set-up and concept work was created."

In the development phase up to the finished race car, Audi set ambitious goals for developing the R18 e-tron quattro with support from various partners. Audi Sport has a track record of successfully managing numerous major technological challenges – from the brand’s first carbon fiber race car in 1999 through to TFSI gasoline direct injection and the TDI project. Building a sports prototype with a conventionally driven rear axle and an electrified front axle is an accomplishment that ranks at a particularly high level in Dr. Wolfgang Ullrich’s book: "A look at the timeline for the project since the beginning of 2010 shows that the e-tron quattro with its highly complex technological content and plenty of new territory was no doubt one of the most challenging projects we’ve ever had. At the same time, we should not forget that the R18 ultra as the lightest car ever built by Audi Sport created the prerequisites for hybridization in the first place. The overall complexity of this project is enormous."