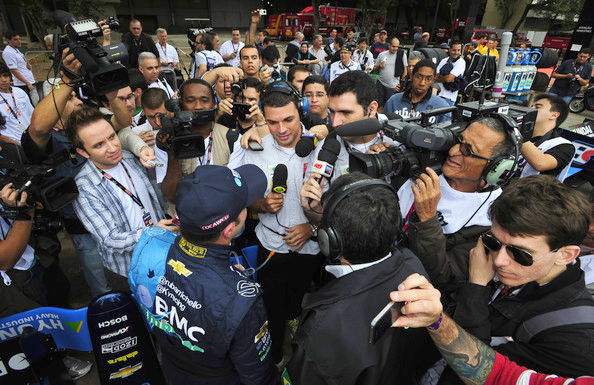 The Super Cup Performance Fiberglass 100 at Columbus Motor Speedway was rained out last weekend, so I have no story to share with you about my own race.

Once the event was officially called, I stopped at a nearby gas station to grab a bag of Munchos and six Lindor truffles (kryptonite for Stephen), slipped REO Speedwagon’s Greatest Hits into the CD player, cranked up the oddly appropriate “Roll With the Changes" and bolted home in the rain to watch the IndyCar race on Sunday.

Yea, verily. I now submit to thee… random thoughts while wondering whatever happened to the claim that IndyCar would vanish from Earth the moment Danica Patrick left. The crowd was huge.

â€¢ Less passing, longer yellows and more crashing at Sao Paulo. I had to double-check my DVD player to make sure I wasn't watching a race from 2011.

â€¢ Simon Pagenaud crashed. E.J. Viso didn't. For a moment I thought I'd been warped into an inverted parallel universe until Marco Andretti and Graham Rahal collided (along with several others). Then I knew everything was alright.

â€¢ On a re-start about 27 laps into the race, Dario Franchitti was hit from behind by Mike Conway. It certainly wasn't Dario's fault, but he was smart (and gracious) not to criticize Conway in the post-race interview. Doing so would have invited justifiable comparisons to his punting Josef Newgarden the first lap at Long Beach.

â€¢ Every race I keep hoping that I'll get used to the rear wheel pods, and every race they look just as bad. And they don't work for their alleged purpose of preventing cars from going airborne during crashes. When Graham Rahal tried his infamous blocking attempt at Long Beach, Marco Andretti hit him from behind and launched into the stratosphere faster than Apollo 14. They're ugly. They don't work. Get rid of 'em.

â€¢ Don't cry for Lotus after the departure of Dreyer & Reinbold Racing and Brian Herta Autosport, both of whom dumped the engine manufacturer over a shortage of engines, lack of power, and reliability issues. Lotus is quietly rejoicing. They did not have enough engines to supply their existing teams at the Indy 500 and their resources were stretched to the breaking point. Lotus' remaining three teams (Dragon Racing, HVM Racing, Newman-Haas Racing) will receive considerably more practice time at Indy, so they're happy. Brian Herta is glad to skip what would have been an unproductive and monumentally expensive trip to Sao Paulo, so he's happy. Lotus has less pressure and fewer teams to supply, so they’re happy. This works out for everyone in the end.

â€¢ Could anything else go wrong for poor Katherine Legge? She gets a Lotus in the engine lottery. Not a single lap of pre-season testing. And she smacks the wall today after getting loose over the bumps leading into a turn. I watched her in Champ Car a few years ago and she is not a last-place driver. She deserves a better shot than what she's getting.

â€¢ Shockingly, Josef Newgarden actually looked like a rookie today. But don't worry. The kid is gonna be stupid good.

â€¢ Honda has pulled off the political coup of the season by designing a turbocharger for the Indy 500, then getting retroactive changes approved by the series to make them more competitive with the Chevy Ilmor engines on the road and street courses. Honda now gets the best of both worlds. Can they catch Chevy? Dunno. But Honda should give their lawyers and PR people a raise.

â€¢ Panther Racing owner John Barnes was fined and placed on “probation" last week for publicly declaring the embarrassing Honda turbocharger affair to be embarrassing. I say that’s backwards. I'd like to see Barnes and Penske's Chevy teams place IndyCar officials on 90 days probation for allowing Honda to alter its turbo package. One more dumb move and Chevy teams start their own open wheel organization. You know… one that's not a spec series. IndyCar has forgotten that they exist only as a servant, not a master.

â€¢ If you really think about it, IndyCar is a one-race series. Always has been. The rest is window dressing. IndyCar forgets that at their own peril.

â€¢ The camera work on the Sao Paulo broadcast was awful. I suspected during the program that NBC Sports was relying on the domestic Brazilian television feed and according to host Bob Jenkins, they were. I know some of the guys on that broadcast and the directing and camera work was lousy compared to their usual standard.

â€¢ Pass of the day: Ana Beatriz taking Charlie Kimball on the outside of the chicane at the end of the main straightaway. Gutsy move, Ana. Fun to watch. Not so much a fan of her move a few laps later when she took out a hard-charging Ed Carpenter.

â€¢ BTW, remember Ed's name in May. Ed is good on ovals. Really good. Chevy is the engine to beat and he's got one. You're gonna be hearing from Ed Carpenter again. You can quote me on that.

â€¢ Delighted to see Michel Jourdain returning to open wheel racing after an 8-year absence. I was the international television host of Champ Car in 2003 when Jourdain was in his prime. It was sad to see him race in the vacuum created by The Split and the unsightly demise of CART, which could barely field 17 cars in its last two seasons. As a result, Jourdain never got his due as a racing driver. I'm glad to see him picking up a ride for the Indy 500. Anybody got a cell number for Adrian Fernandez?

â€¢ I'm worried about the Indy 500 becoming a NASCAR parade this year. The new DW12 is only turning about 215 mph in testing. With this tire and wing package, they'll probably be flat all the way around. That makes for lousy racing and minimal driver input. They either need more engine or less tire. Expect 2012 to be an engineer's race. But hey… it’s still Indy.

It is May yet?