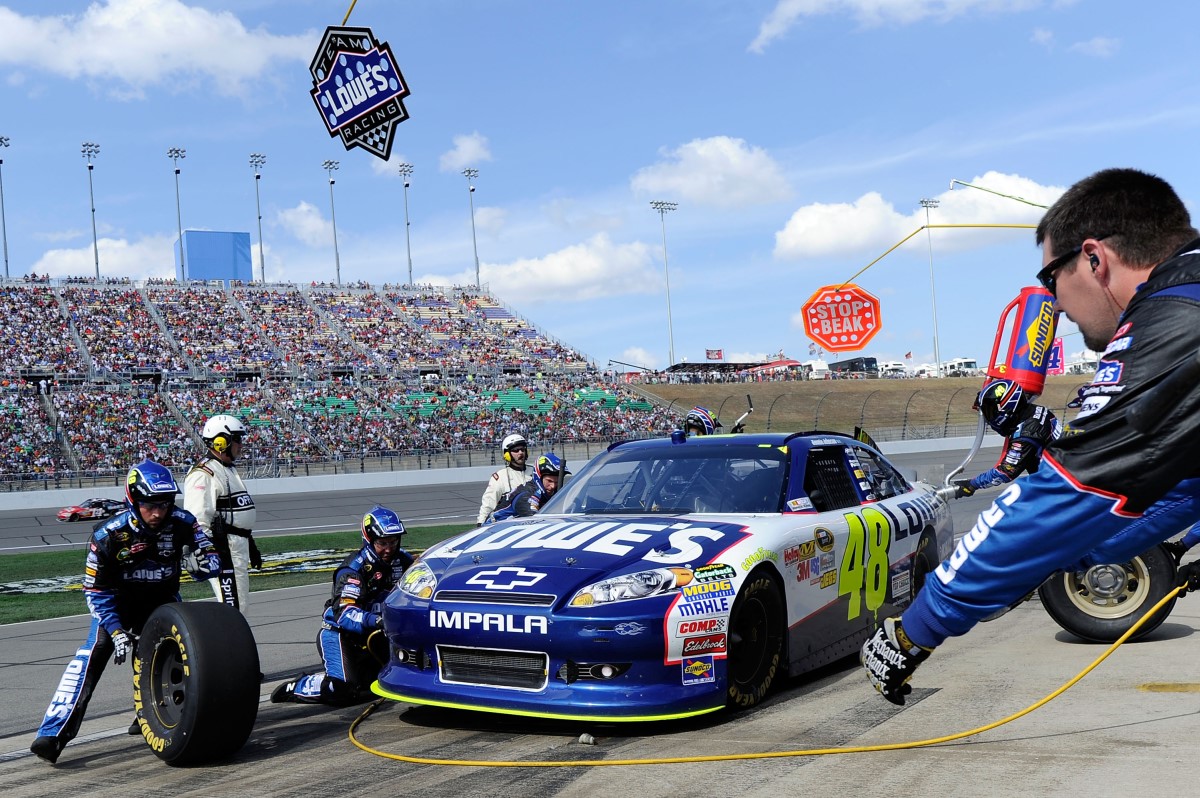 The NASCAR Sprint Cup Series will be at the Kansas Speedway for the running of the STP 400. The occasion is very special in light of the fact that it's also the 40th anniversary of the ground breaking motorsports partnership between "King" Richard Petty and STP.

In honor of this special occasion, Richard Petty Motorsports will paint their #43 Ford, driven by Aric Almirola, with the historical Petty blue and STP day glo red colors of the past. STP will also be presenting a $43,000 donation to the Victory Junction Camp, a facility created by the Petty family for seriously ill children. STP has also invited four of the Victory Junction campers to the speedway to be the official Grand Marshalls of their race.

The Kansas Speedway weekend will also be enhanced by the presence of the always exciting NASCAR Camping World Truck Series who will running the SFP 250 on Saturday afternoon.

Also enhancing the weekend for the fans, as well as the race teams, will be the new Hollywood Casino, which overlooks turn two of the speedway. This lavish. $411 million complex, officially opened back in February and is a partnership between Penn National Gaming and the International Speedway Corporation which also owns the race track.

The fact that the STP 400 is being run on a 1.5 mile intermediate sized track, also known as "cookie cutter tracks", opens up the possibility for a wide variety of teams to find victory lane on Sunday based on their past successes on this type of speedway.

To get a better idea regarding which driver could be the lucky one at Kansas, we once again turn to the number crunching professionals from the Las Vegas based World Sports Exchange, (WSE).

Topping the WSE's Kansas list is Jimmie Johnson rated at 6 to 1 odds. While Johnson and company are still seeking their first win of the season, he has had some very strong runs this year. He's also very good on 1.5 mile tracks and has 38 career wins on them. But when it comes to the Kansas Speedway, Johnson's numbers are really strong. He's a two time winner there and has four top five finishes, nine top tens and a very strong average finish ratio, (AFR), of 8.4. Don't overlook the fact that Johnson really wants to be the driver to present his team owner, Rick Hendrick, with that long sought after 200th win. Team win #199 came from Johnson at the Kansas Speedway last October and that could be a very good sign.

Ranked at 7 to 1 odds is Tony Stewart who will be looking for major improvements following his extremely disappointing experience in Texas last weekend. That episode in the Lone Star State caused him to fall to seventh in the points standings. Kansas may very well be the speedway for Stewart to get things back on track again. He 's a two time winner there with five top fives, eight top tens and a healthy 12.2 AFR. He also has 26 career wins on intermediate tracks.

At 8 to 1 odds you will find the Roush Fenway Racing duo of Matt Kenseth and Greg Biffle. Kenseth is seeking his first Kansas win but does have three top fives, six top tens but the AFR, at 18.0, is a little on the high side. He does hold the speedway's qualifying record, 180.856 MPH, which was set back in 2005. His season consistency finds him second in the points and he will likely have a strong run this Sunday but it may not be strong enough for victory lane.

Series points leader Greg Biffle is on fire right now and will be bringing the momentum of last weekend's win at Texas to the mid west. Biffle also has excellent Kansas Speedway numbers that includes two wins, six top fives, eight top tens and a very good AFR of 8.3.

At 10 to 1 you will find an impressive quartet of drivers that includes Kevin Harvick, Carl Edwards, Jeff Gordon and Kyle Busch all of whom are seeking their first win of the season. Harvick's consistency has him ranked fifth in the points, but Kansas is not one of his stronger speedways. He's winless there and only has one top five finish there along with a 13.6 AFR.

Carl Edwards is off to an uncharacteristic sluggish start and is seeking his first win of the season as well as his first win at Kansas. The good news is: he has four top five finishes, seven top tens and a very good AFR of 10.7. Kansas could be the jump start his season needs.

Jeff Gordon has endured a roller coaster of a 2012 season so far and will also be looking at the Kansas race to turn things around. It's very possible it could happen this Sunday because Gordon has some outstanding Kansas numbers that includes two wins, eight top fives, nine top tens and a healthy 10.2 AFR. Gordon also wants to be the driver that gives his boss, Rick Hendrick, that coveted 200th Sprint Cup Series win.

Meanwhile Kyle Busch will also be looking for his first win of both 2012 and at Kansas while trying to improve on his 14th place in the points standings. Unfortunately, the numbers indicate that this process may not begin at the Kansas Speedway this Sunday. Busch only has one career top ten at the speedway and an extremely high 21.1 AFR.

The WSE's 12 to 1 category features Brad Keselowski and Denny Hamlin. Keselowski won a race at Kansas last June and has a very good 10.0 AFR. But there has been a recent problem with fuel pick up in the engine of his Penske Dodge. The problem surfaced again last weekend at Texas and the team fell to 15th in the points. If they have resolved this situation once and for all, then Keselowski might make an interesting long shot wager for the Kansas race.

Ranked sixth in the points standings, Denny Hamlin is seeking his first Kansas win, He has a pair of top five and top ten finishes along with a 15.8 AFR.

Looking at the WSE's middle tier, Hendrick Motorsports drivers Kasey Kahne and Dale Earnhardt Jr are ranked at 15 to 1. Here's two drivers who would love to be the one to present Rick Hendrick with that 200th Cup win. Kahne's tough start in the 2012 season remains a mystery that has been well documented. He finally scored his first top ten of the season last weekend at Texas which moves him to 24th in the standings. At Kansas he has one top five, three top tens and a slightly high 17.0 AFR.

We're all familiar with Dale Earnhardt Jr's story. The good news is he's tied for second in the current points and, so far in 2012, he has three top fives, five top tens and his AFR is currently 8.1. The bad news is: he hasn't won a Sprint Cup race since June of 2008. However, the next win may not be at Kansas next Sunday. He only has one top five finish and a 17.2 AFR at the speedway.

The WSE's 30 to 1 ranking features the trio of drivers from Michael Waltrip Racing, an organization that has shown a great deal of improvement this year. Clint Bowyer is tenth in the points standings. Bowyer has somewhat of an emotional advantage here. He's from Emporia-Kansas and considers the Kansas Speedway his home track. That element alone can often make a driver dig a little harder for a win. That, combined with a healthy 12.0 AFR, could make him an interesting long shot.

Never make the mistake of overlooking veteran Mark Martin. especially the way that MWR Toyota has been performing lately. Martin is a former Kansas winner with a 13.1 AFR.

Martin Truex Jr is fourth in the points and many believe it's just a matter of time before this driver gives MWR its first Cup win of the year. However, it may not happen at Kansas because the numbers simply do not support the concept. Truex has zero top tens at this track along with an extremely high 26.3 AFR.

Closing out the WSE rankings for the STP 400, former Kansas winner Ryan Newman is rated at 39 to 1 while A J Allmendinger and Jeff Burton closes the list at 50 to 1. If you do not see the name of your favorite driver here that means the WSE has automatically rated them on their "others" list at 15 to 1 odds.

Now for the disclaimer: NASCAR wants us to remind you that these posted numbers should be viewed for entertainment and informational purposes. They neither encourage or condone the placing of wagers on their races.

Now, for the few of you who might actually care what I think, I'm lining up with the WSE and picking Jimmie Johnson to win the STP 400 while giving Rick Hendrick that 200th win. This driver's Kansas Speedway numbers are just too good to ignore.

The race has 46 entries vying for the 43 starting positions. 11 of those entries are on the go or go home list meaning they are not guaranteed a starting berth in the race because they are currently outside of NASCAR's top 35 in owner's points.

The Kansas Speedway opened in 2001. The first NASCAR Sprint Cup Series event was held in September of 2001 and was won by Jeff Gordon who also won the 2002 race as well.

Since that time the Kansas Speedway has hosted 12 NASCAR Sprint Cup events that has sent eight different winners to victory lane.

Sweeping a NASCAR weekend is not easy. It's only happened once in 2004 when Joe Nemechek won both the Nationwide and Sprint Cup events from the pole position. Jimmie Johnson became only the second driver to win from the pole in 2008. Seven, of the 12, Kansas races have been won from a top ten starting position.
A race at the Kansas Speedway has been known for close finishes in the past. In eight of the races there the margin of victory has been less than one second.

Weather should not be a problem for the weekend. Heavy clouds are expected on Friday morning becoming partly sunny and cool with daytime highs in the upper 50's. On Saturday and Sunday look for clear skies and highs in the mid 60's.

The STP 400 will be broadcast live by Fox Sports with the pre race show beginning at 1230 pm eastern time. The race re-air will be on Wednesday, April 25th, at 12 pm et on SPEED.

The companion event at the Kansas Speedway is Saturday's SFP 250 by the NASCAR Camping World Truck Series.

There will be no repeat winner this year. 2011 race winner Clint Bowyer is not entered in this year’s event.

The SFP 250 will be broadcast live by SPEED with the set up show beginning at 130 pm et.