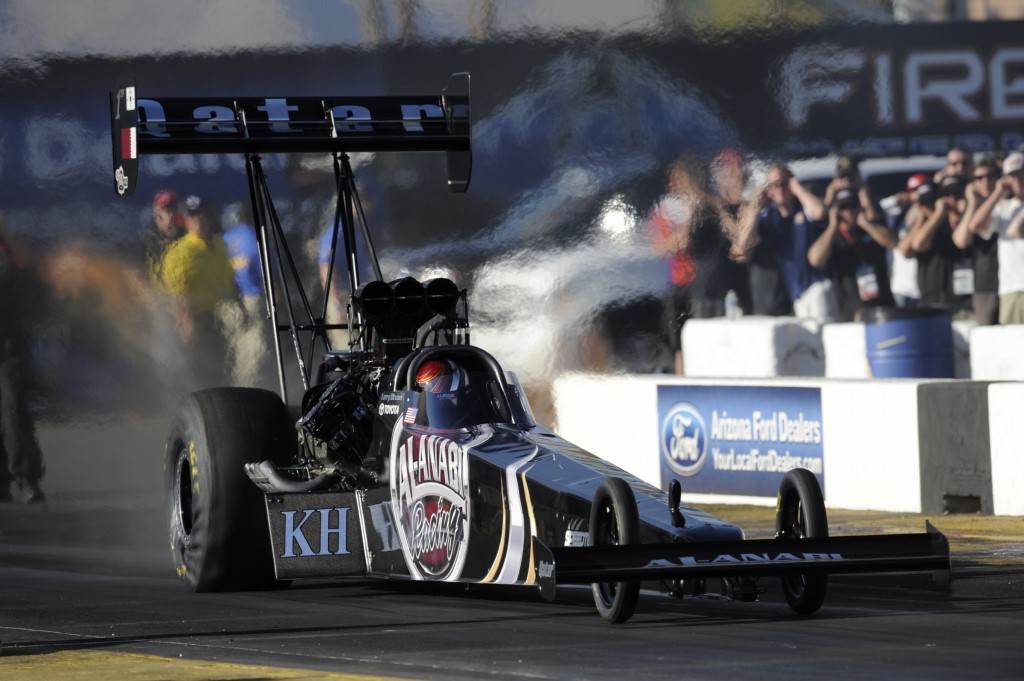 Jack Beckman raced to his third Firebird Int'l Raceway win and took over the Funny Car points lead as racing came to a close Sunday at the NHRA Arizona Nationals. Larry Dixon and rookies Vincent Nobile and Hector Arana Jr. were also winners in their respective categories at the fourth of six races in the NHRA Full Throttle Countdown to the Championship, the six-race playoffs to determine the world championships.

Beckman powered his Aaron’s/Valvoline Dodge Charger to a 4.354-second run at 278.29 mph in the final round to get the victory over fellow Don Schumacher Racing teammate Johnny Gray. The win, his second consecutive in Phoenix and 12th of his career, moved Beckman into the points lead for the first time in his career.

“It’s hard to digest everything that happened here today," said Beckman. “I’ve always said I want to control our destiny on the racetrack, but being three rounds behind with 12 left, [Mike] Neff and [Matt] Hagan had to lose relatively early to put us back in the hunt, and you can never bet on that because those are two phenomenal teams. For everything to happen the way it happened today, I’m not so gratified that I’m the points leader; I’m gratified that we got ourselves back into the championship hunt. It’s going to be interesting."

Defending Top Fuel world champion Dixon held off Antron Brown in the final round to collect his second win of the season. Dixon drove his Al-Anabi Racing dragster to a 3.955 at 307.37 run en route to his third win in five final-round appearances at Firebird Int'l Raceway. The win also moved Dixon to the second spot in the standings, 20 points behind the leader.

“It’s been a long time since we won," said Dixon. “You never know when you’re going to get the next one. Antron does such a great job in the car, and [his crew chiefs] Brian [Corradi] and Mark [Oswald] had their car running really well. Obviously, [my crew chiefs] Jason [McCulloch] and Ronnie [Thompson] didn’t take them lightly. We made our best run in the final round, we needed every bit of it. It was really nice to go some rounds today and get back in this points deal. It’s nice to win, but to have a shot at a championship is a big deal, a really big deal."

In Pro Stock, rookie driver Nobile held off fellow Dodge driver Allen Johnson in the final round to secure his third race win of the season. Nobile powered his Mountain View Tire Dodge Avenger to a 6.678 at 208.30 and posted a reaction time of .009 to beat Johnson on a holeshot. The win moved Nobile up to the third spot in the point standings.

“This is huge," said Nobile. “We definitely struggled in the last two races, going out in the first round. Which really hurts, especially in the Countdown. Our team kept their heads up; I kept my head up. I knew we could do it, and we proved it today. They supplied me with a fast car, a consistent car for four rounds, and I did my job. It just proves that if you keep your head up that you can win races."

In Pro Stock Motorcycle, Arana raced to his second consecutive win and third of the season after he posted a perfect reaction time of .000 in the final round of the race. Arana powered his Lucas Oil Buell to a 6.884 at 194.30 past points leader Eddie Krawiec to collect the win in his third straight final round appearance. With the win, Arana sits 10 points behind leader Krawiec.

“I’m living a dream," said Arana, who along with Nobile is one of the candidates for the Automobile Club of Southern California Road to the Future Award. “This is amazing. I couldn’t have thought of or imagined this. I really feel like I perform well when it comes down to the wire and the pressure is on me. And I feel like it gives me that extra edge, the energy and the drive to win."

The next stop in the NHRA Full Throttle Drag Racing Series is the Big O Tires NHRA Nationals Oct. 27-30 at The Strip at Las Vegas Motor Speedway.