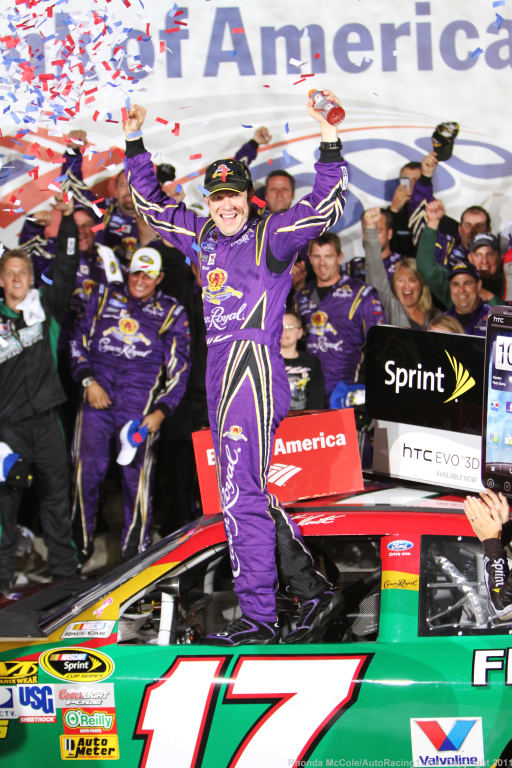 Matt Kenseth spoiled Kyle Busch’s come-from-behind effort and Jimmie Johnson saw his hopes for a sixth-straight title fade away as the Chase for the Sprint Cup took a major turn in Saturday night’s Bank of America 500 at Charlotte Motor Speedway.

Carl Edwards held onto the points lead with a third-place effort, while Jimmie Johnson’s dropped to eighth in points with a 34th-place finish after plowing his car into the outside wall.

In all, eight of the 12 positions in the points standings changed hands with the top five separated by 24 points with five races left in the Chase.

Kenseth led the final 25 laps after passing Busch and held on through one final restart with 12 laps to go to win his third race of season and jump from fifth to third in points.

It was the 21st-career Sprint Cup victory for Kenseth and his second at Charlotte, where Kenseth scored his first career victory in the 2000 Coca-Cola 600.

“It was an awesome win for us," said Kenseth. “I had fun racing with Kyle (Busch) there. We had a pretty decent restart, the second to last one, and got by Denny and Carl and ran Kyle down. It was tough to get by him and I’m glad we could make it happen."

Kenseth, who had been under the radar for the first four races in the Chase, now finds himself as a serious contender for the title, just seven points behind his Roush-Fenway Racing teammate Carl Edwards.

“All we have any control over is our own car and ourselves and what we do," said Kenseth. “I don't really honestly spend my time to see where anybody else finishes. We go out every week and try to beat the other 42 cars and finish as high as we can and that's how you get the most points and not really worry about what everybody else does.

“I don't know, the whole points thing where anybody is at but certainly anything can happen at Talladega and Phoenix I think is going to be quite interesting as well. There's a lot of racing to do, we are halfway through it, but five races is a lot of races."

Johnson had been the driver everyone had their eye on coming into Saturday night’s race, having battled back in the points standings with back-to-back top-two finishes.

But his night ended in a shower of sparks as he broke loose racing Ryan Newman for seventh in turn two with 18 laps to go and drove head-on into the outside wall.

Johnson emerged unhurt from his destroyed race car, and his title hopes possibly destroyed with it, as he now trails Edwards by 35 points and seemingly out of contention.

“We just have to go racing. That is all there is to it," said Johnson. “There are five races left, and right now all we have are those five races. Definitely not the night we wanted. This is not going to help us win a sixth championship. Promise you, this team and myself, we won’t quit. We will go for every point we can from here on out and hopefully we are still champions at the end of the year."

“We dodged a bullet here. This has been a tough track for us," said Edwards. “We have five times the points lead we had coming in. We went from one point to five points, so that’s something.

“If we can slowly build a little bit of a lead, that’s the best thing we can do. It’s so competitive right now. Everybody is so fast that you just take everything you can get. I’m happy with this run. I’ll go to bed tonight and sleep well and I’m just glad we didn’t make any big mistakes."

For Busch, it was the second night in a row he watched a Ford driver pull away in the waning laps, after losing out to Edwards in Friday night’s Nationwide Series event.

Busch had started in the rear of the field after his team changed engines, then fought their way back to the front of the field and led a race-high 111 laps before Kenseth reeled him in and made the pass on the inside of the front straight on lap 309.

Busch tried to mount a charge back to the front, but lost ground holding off Edwards for second allowing Kenseth to pull away.

Busch gained four spots to move to fourth in points, but still trails Edwards by 18 points.

“That 17 (Matt Kenseth) — he found something that none of us could find tonight and made something out of nothing. He just out drove me," said Busch. “We have to keep finishing like this — it’s all it takes. It’s not that hard. We finally finished where we ran except we didn’t. We still lost a position, which is four points essentially because you get three for bonus points of winning a race.

“Again, it’s frustrating, but we’ll take it and if we can finish second from here on out then we might win this deal. These other guys — the 99 (Carl Edwards) and the 29 (Kevin Harvick) finished too good tonight too."