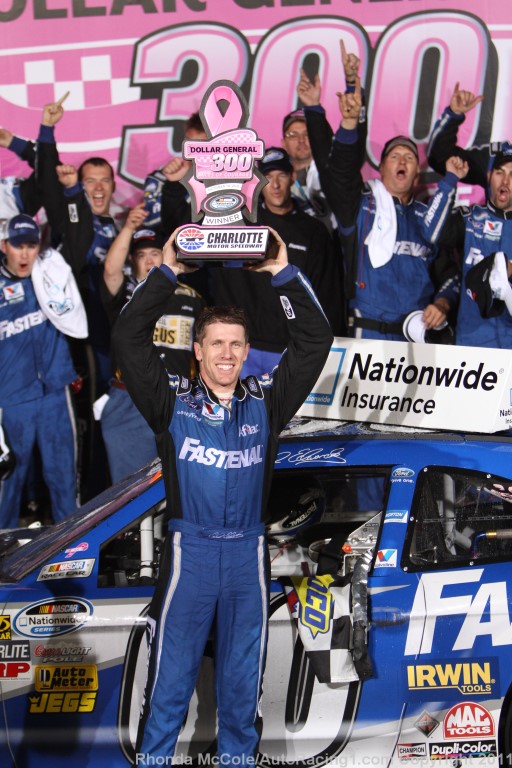 Carl Edwards fought back from an early unlucky bounce off the wall to beat out Kyle Busch for the victory in Saturday night’s Dollar General 300 NASCAR Nationwide Series race at Charlotte Motor Speedway.

Edwards passed Busch on the final restart with five laps to go thanks to a push from his Roush-Fenway Racing teammate Trevor Bayne and pulled away to a four car-length cushion that Busch was unable to overcome, handing Edwards his eighth Nationwide win of the season and his sixth-straight top-two finish.

Edwards credited his team for helping him fight his way back into contention and to Bayne for giving him the extra boost to get past Busch for the lead.

“Trevor was behind me, so that’s what got me the lead – Trevor’s push. That meant a lot," said Edwards. “He could have gone three-wide, so this is huge.

“I hit the wall really hard and messed the right side of the car up, but it’s a big week for Ford. Its 110th anniversary of Ford Racing. Henry Ford won a race 110 years ago. We’re leading the Nationwide points and the Cup points and we’re winning with these Ford Mustangs, so that’s huge."

Bayne’s third-place effort was just his third top-five of the season and his first since the Nationwide race at Michigan in June.

“I was hoping for a 1-2-3 finish there, but we still got a first and a third….but I was hoping we could get a win tonight," said Bayne. “Pushing Carl to the lead there at the end was kind of fun. I saw him slipping a little bit and then we got him by Kyle getting into turn one. Those guys turned up the wick the last few laps. You really see what these cars have in them when you see Kyle Busch and Carl Edwards battling for a win. They can really wheel these things, but I’m really happy with our finish."

Edwards started fifth on the night and hung around in the top ten through the first round of pit stops before Edwards slapped the wall in turn four on lap 32, tearing up the right side of his car and knocking the toe-in out of the front end.

Edwards and his crew worked throughout the race to bring the no. 60 Fastenal Ford Fusion back up to racing trim, getting him back into the top ten in the late stages of the race.

After fighting his way back up through the field, Edwards found himself sitting in second place – on the inside of Busch – for the final restart on lap 195.

Busch had led since taking the lead from Sadler on with 23 laps do go, but couldn’t open up any kind of lead as the final two cautions flew – first for debris from Kasey Kahne hitting the wall on lap 186, then for Logano’s spin.

On the restart, Busch and Edwards were even at the start-finish line before Bayne tucked in behind Edwards, allowing him to nose ahead of Busch and clear him before they reached the backstretch.

Over the final five laps, Busch managed to get with a car-length of Edwards, looking inside of Edwards’ bumper coming through turn two on the final lap, but couldn’t pull off the pass, coming up a car-length short at the line.

“The night started out pretty poorly due to my running into the wall," said Edwards. “We fought back from that. Mike (Beam, crew chief) did a really good job of convincing me everything was gonna be okay, and it was.

“And then that last restart, if Trevor hadn’t given me that push down into turn one – if he hadn’t tucked in behind us and put us out there in front – I think we would have had a really hard time holding Kyle off on the top. It was just a really, really good team effort."

After the race, Busch blamed a lack of horsepower amongst the Toyota teams as the reason Edwards was able to get past him on the last restart.

“It was really good on long runs. Slow on short runs — didn’t have enough under the hood to keep up," said Busch. “Got out-motored on that last restart and finished second."

Brad Keselowski led a race-high 119 laps, but ended up finishing sixth after cutting down a right-rear tire while leading with 30 laps to go.

Besides the battle for the race win, teams also had their eye on the heated battle for the points lead, Sadler trailing Stenhouse by just 20 points. Sadler also had his eye on another prize – as one of four drivers eligible for the final Nationwide Dash 4 Cash bonus.

In the end, it was Sadler coming out smiling, beating out Stenhouse, Kenny Wallace and Ryan Truex to claim the $100,000 Dash 4 Cash bonus and gaining five points in championship battle, now 15 points behind Stenhouse.

“We raced hard to be able to win the money here tonight," said Sadler. “This is a very special race for me tonight. For us to be able to shave some points off tonight, win the Dash 4 Cash and finish top five at the end is a really good night for our race team.

“This is a great program that Nationwide has put together. It’s very awesome of them to give us the extra incentive for the drivers but also bring in the fans and get them involved. That just says a lot for them and our sport."

Aric Almirola and Justin Allgaier moved up to third and fourth in the points, respectively. Former third-place driver Reed Sorenson finished 32nd after spending several laps in the garage and dropped to fifth in points.