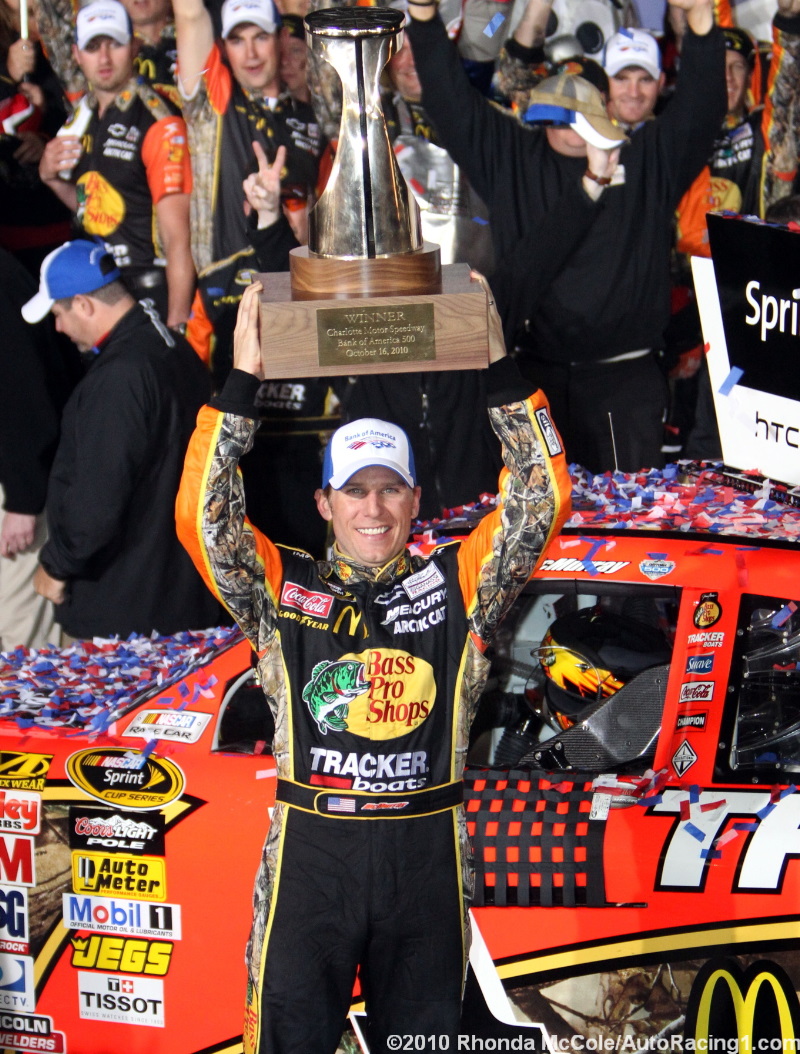 There's good news for racing fans: the NASCAR Sprint Cup Series is bringing their 2011 Chase For The Championship to the Charlotte Motor Speedway, a racing environment that has been serving up on track excitement and drama since 1960. From crashes under the checkers to sure fire winners running out of fuel a matter of feet from the checkers, fans need to be prepared for just about anything when the green flag falls on Saturday night's Bank Of America 500.

The other good news is the fact that the race track is located in Concord-North Carolina just a short ride from the home base of the vast majority of the Sprint Cup teams. That means that drivers, and their hard working Chase stressed crew members, gets the luxury of spending a racing weekend at home with their families while sleeping in the comfort of their own beds.

Needless to say, the focal point of the Bank Of America 500 will be how it impacts the Chase standings. The drivers in the upper tier will be racing hard to enhance their status as championship contenders. The middle tier of drivers will be doing the same in an effort to move towards the top of the points while the drivers in the lower tier will be pulling out all of the stops to see if there's any way to become contenders once again. It's going to be an exciting evening in Concord-North Carolina.

The Charlotte Motor Speedway is a 1.5 mile intermediate sized track. There are Chase contenders who already have some solid numbers there. There are other Chase contenders who are seeking their first win there but actually has outstanding numbers from other intermediate tracks. To get an idea of who has the right numbers, and who needs them, we again turn to the professional number crunchers from the Las Vegas based World Sports Exchange, (WSE).

To no real surprise the WSE has Jimmie Johnson at the top of their rankings at 4 to 1 odds. The five time champion is a six time winner at Charlotte. He also has 10 top five finishes, 14 top tens and a very healthy average finish ratio, (AFR), of 10.8. Johnson has a string of four straight wins at Charlotte after sweeping both annual events there during the 2004 and 2005 seasons. A second place finish at Dover, combined with a win at Kansas last week, has moved Johnson from tenth to third in the points standings and only four points away from the top. This is likely one of the best wagers to be found at the moment.

The same situation applies to current points leader Carl Edwards, ranked at 8 to 1, who's also winless at this track. Edwards only has four top fives and a 13.3 AFR at Charlotte. But on intermediate tracks he has 17 wins and 67 top fives.

Also ranked at 8 to 1 is Jeff Gordon who is a five time Charlotte winner with 16 top fives and a 15.8 AFR. He also has 41 wins on intermediate tracks. Gordon fell to the middle tier of the Chase standings following a surprise blown engine at Kansas last weekend. He's 47 points out of first and will need to make great strides to make that up. Charlotte is a very good place for him to make that happen.

At 10 to 1 odds is Kevin Harvick whose lone Charlotte win came in last May's World 600 on the final lap after Dale Earnhardt Jr ran out of gas. He's second in the standings and just a mere single point behind Carl Edwards. However Charlotte is not a strong track for this driver. He's only scored two top fives there and has an AFR of 19.1

Also ranked at 10 to 1 is Tony Stewart who is currently seventh in the standings, 19 points away. Stewart is a former Charlotte winner with a 13.8 AFR. He also has 22 wins on intermediate tracks. After winning the first two Chase races, Stewart hit a dry spell, during races three and four, and fell from first to seventh in the standings. He needs a good finish at Charlotte to get his Chase hopes back on track.

At 11to 1 is the amazing Brad Keselowski who is fourth in the standings and only 11 points away. He wasn't expected to make the Chase at all and then surprised us all with late regular season wins which earned him a wild card berth. His Charlotte numbers are terrible: zero wins, zero top fives, zero top tens and a 19.5 AFR. Despite that, this driver has a way of showing up on the radar screen when you least expect it.

Kurt Busch is ranked at 12 to 1 and is ranked 6th in the Chase standings 16 points away. He has one previous win at Charlotte but his AFR, at 19.7, is high. On a brighter note he does have 16 wins on intermediate tracks.

The snake bit Denny Hamlin is ranked at 14 to 1 this week. He's at the bottom of the Chase standings, 79 points away, and his championship hopes are gone. He's still seeking his first win at Charlotte and has a 16.6 AFR. He does, however, have 11 wins on intermediate tracks.

At 16 to 1 is the equally snake bit Greg Biffle. He's also looking for his first Charlotte win and has a 17.9 AFR. He does have 15 previous wins on intermediate tracks.

Kasey Kahne is ranked at 18 to 1 and would love to give the beleaguered Red Bull Racing a win before he leaves them to join his new ride at Hendrick Motorsports next season. That could happen at Charlotte where Kahne has three wins and a 14.1 AFR.

At 19 to 1 is fan favorite Dale Earnhardt Jr who was denied his first Charlotte win last May when his car ran out of gas on the final turn of the final lap. He has five top five finishes and a 19.4 AFR at Charlotte. He also desperately wants to snap a winless streak that dates back to June of 2008.

In the WSE's lower tier this week Clint Bowyer is ranked at 25 to 1 for the Charlotte race. He's followed by Chase contender Ryan Newman at 28 to 1 who could use a strong finish Saturday night to improve on the fact that he's 11th in the standings and 54 points away.

Any driver not listed here are automatically ranked at 15 to 1 odds. This seems to include driver Matt Kenseth who is ranked 5th in the Chase standings and only 12 points away. Kenseth is a previous Charlotte winner with a 14.9 AFR. He's also a 14 time winner on intermediate tracks. With those numbers one has to assume that his omission from this week's WSE list may have been just an oversight.

NASCAR wants us to remind you that they view these odds numbers as a source of information and entertainment. They neither encourage nor condone the placing of wagers on their events. But if you're going to do it anyway, at least you have the numbers from the professionals at the WSE.

The Bank Of America is 334 laps/500 miles around the Charlotte Motor Speedway's 1.5 mile quad oval.

The race has 48 entries vying for the 43 starting positions. 13 of those entries are on the go or go home list meaning they are not automatically guaranteed a starting berth in the race because they are presently outside of NASCAR's top 35 in owner's points. These teams will have to rely on qualifying speeds to make the race.

That could present a problem on qualifying day for the go or go home teams due to the Thursday weather forecast. The Thursday forecast, for Concord-North Carolina, calls for a 60 percent chance of rain. The speedway has a fleet of six jet dryers, which takes approximately two hours to dry the tracks. The Friday and Saturday forecasts calls for a return to clearing skies with daytime highs of 75 degrees.

The defending race champion is Jamie McMurray. Kevin Harvick won the May 2011 race. Bobby Allison, Junior Johnson and Jimmie Johnson are tied for the most wins at Charlotte with six each. The first NASCAR Sprint Cup race at the Charlotte Motor Speedway was held on June 19, 1960 and was won by Joe Lee Johnson. Since that time there has been 105 Cup races at Charlotte that has sent 44 different winners to victory lane. Drivers Jeff Gordon, Matt Kenseth, Bobby Labonte, Jamie McMurray, Casey Mears and David Reutimann scored their first ever Sprint Cup win at Charlotte.

The track qualifying record, 193.216 MPH, was set by Elliott Sadler back in October of 2005. There has been 14 wins from the pole position with the most recent occurrence being Jimmie Johnson back in October of 2009. NASCAR Hall Of Fame driver David Pearson holds the track record for the most poles at 14. Ryan Newman leads the modern era drivers with nine poles followed by Jeff Gordon with eight.

The Charlotte Motor Speedway is a very challenging 1.5 mile quad oval. It has 24 degrees of banking in the turns. The frontstretch measures 1,952.8 feet, the backstretch is 1,360 feet long with five degrees of banking. The speedway presently has seating for 171,000 fans.

Speeding on and off pit road has been somewhat of a situation for many of the Sprint Cup teams during recent races. The pit road speed at Charlotte is 45 MPH.

The Bank Of America 500 will be broadcast live by ABC Sports with the "Countdown" show beginning at 7 pm eastern time. Re broadcasts will be at 2 am Sunday morning eastern time on ESPN and again on Wednesday, 12 pm et, on SPEED.