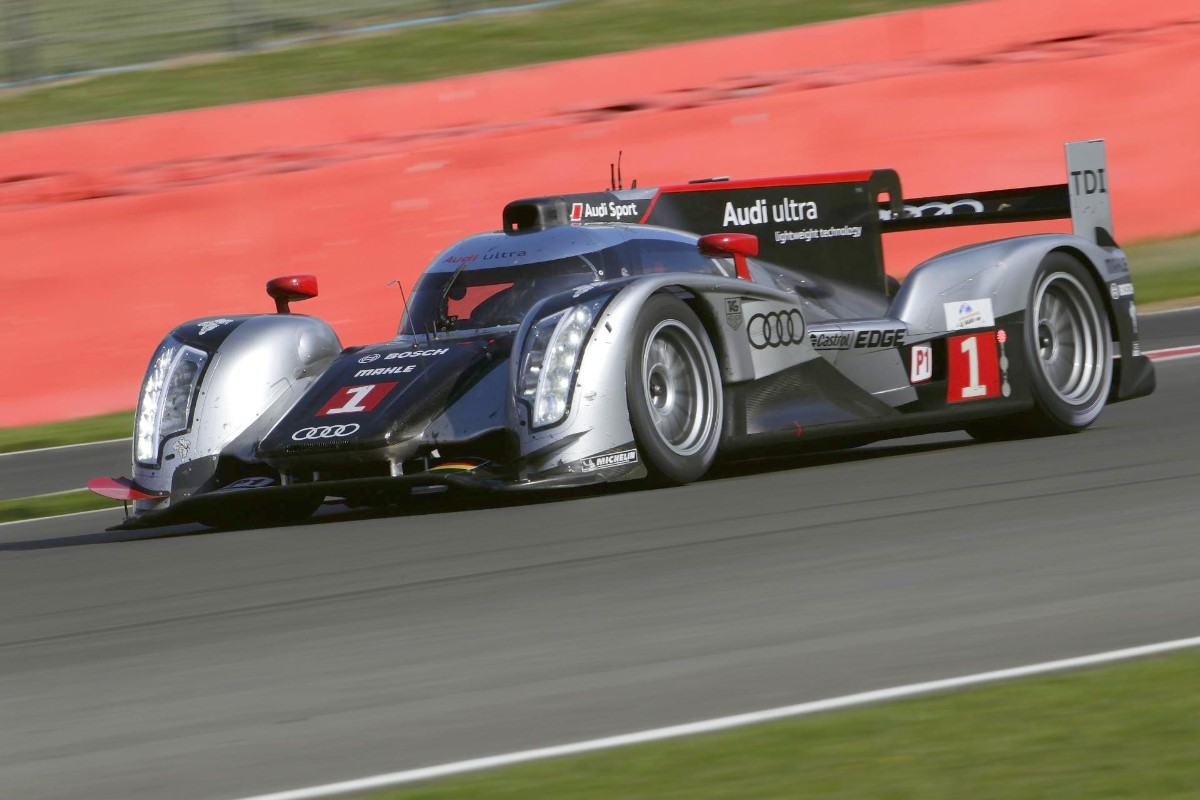 In June Audi celebrated its tenth victory with the R18 TDI diesel race sports car and ultra-lightweight technology in a dramatic race at the famous Le Mans 24 Hours. Likewise, on October 1st, Audi Sport Team Joest is aiming for the brand’s tenth triumph at the U.S. counterpart, the "Petit Le Mans" at Road Atlanta in the state of Georgia.

Nine times Audi has won the event which alongside the Daytona 24 Hours and the Sebring 12 Hours is the most important endurance race in North America. From 2000 to 2005 the Audi R8 was unbeatable at the race that is run over 1000 miles or for a maximum of ten hours. In 2006, 2007 and 2008 the Audi R10 TDI triumphed three times in a row. After unfortunate defeats in the past two years with the R15 TDI, Audi is set on returning to victory lane with the new R18 TDI at Road Atlanta.

Audi Sport Team Joest is fielding two vehicles at the first overseas event of the R18 TDI. Each will car will have three drivers due to the length of the race. Timo Bernhard and Marcel FÃ¤ssler, who have been forming a driver team in the Intercontinental Le Mans Cup (ILMC) since the round at Imola and have been on the podium twice, will be supported by Romain Dumas. Joining Le Mans record winner Tom Kristensen and Allan McNish will be Dindo Capello – the most successful driver of the American classic with a track record of five overall victories (2000, 2002, 2006, 2007 and 2008).

Last year the Italian became the victim of a strange incident. While he was leading the race an insert in his helmet that is prescribed by the regulations came loose and caused the fireproof balaclava to slip over his eyes. The unscheduled pit stop cost Audi a possible victory.

Minute details could also be crucial this year. At Le Mans Audi triumphed in June after 24 hours with an advantage of merely 13.854 seconds. At the 6-hour race at Silverstone the fastest lap times of the top four vehicles were within 202 thousandths of a second. And with 56 teams having submitted entries, the track at Road Atlanta will be pretty packed, with numerous overtaking maneuvers posing a permanent risk of body contact.

After third place at Imola and second place at Silverstone there is just one goal for Audi at the U.S. classic on October 1st: victory. Therefore, Audi Sport Team Joest will already be testing on the weekend before the race at Road Atlanta in order to set up the R18 TDI as perfectly as possible for the special characteristics of the track and not leave anything to chance.

Nothing was left to chance either by the engineers from Audi Sport who developed the new diesel race sports car. The Audi R18 TDI is packed with innovative technology – from the compact 3.7-litre V6 TDI engine with a mono-VTG charger, the full LED headlights through to ultra-lightweight design that is becoming increasingly important in production cars too.

Tens of thousands of spectators lining the track at Road Atlanta will be watching the two R18 TDI cars with their whispering V6 TDI engines. Since its inaugural round in 1998, "Petit Le Mans" has evolved into one of North America’s biggest racing events that is meanwhile attracting more than 100,000 fans.

Topics of the weekend

– Will Audi manage the revenge for Silverstone?
– Who will do the best job of getting through the dense traffic?
– How many yellow periods will interrupt the race?
– Will the Audi R18 TDI be the fastest car in the field, as it was at Le Mans?

Quotes by the officials

Dr. Wolfgang Ullrich (Head of Audi Motorsport): "I’m personally very much looking forward to Road Atlanta. I like this race track and think it’s one of the nicest circuits for the sports prototypes. It’s a track on which Audi has celebrated major successes before. And after Imola, where things didn’t go so well for us, we were fully competitive again, most recently at Silverstone. But there our good work went unrewarded. I’m hoping that we’ll be showing a good performance with the R18 TDI in America and achieve victory. At the same time, I’ll be in permanent phone and e-mail contact with Valencia where Martin Tomczyk might be able to clinch the DTM title early for Audi – it’ll be an important, exciting and busy weekend for Audi Sport."

Ralf JÃ¼ttner (Technical Director Audi Sport Team Joest): "For Road Atlanta, there can only be one aim: all-out attack! We’ve got to finally win there again. At Silverstone, we were simply struck by misfortune. Even without that factor it would have been incredibly tight and we don’t know what the outcome would have been. Road Atlanta is a special event. We’ve run there before, in the IMSA. ‘Petit Le Mans’ was launched in 1998, and we contested it even back then. It’s a classic and the longest race after Le Mans and Sebring. The ten-hour race is held on an incredibly beautiful and challenging track. It also enjoys an extremely high level of prestige today. It’s called ‘Petit Le Mans’ and that also includes a piece of Le Mans. That’s why we’ve simply got to win there."

Facts and quotes by the Audi drivers

Timo Bernhard (30/D), Audi R18 TDI #1 (Audi Sport Team Joest)
– Was class winner at Road Atlanta in 2003, 2004, 2006 and 2007
– Most recently finished as the runner-up with Marcel FÃ¤ssler at Silverstone
"At Silverstone we saw how tight the situation can be in the end. That gave the whole team another boost. Our performance is right, we’re in contention for victory, and in the UK we had the lead several times. After my class victories at Road Atlanta an overall win would mean a lot to me. Maybe I can continue my sequence of results: At Sebring I was fifth, at Spa fourth, at Imola third and at Silverstone second. So what’s still missing …?"

Romain Dumas (33/F), Audi R18 TDI #1 (Audi Sport Team Joest)
– Class winner in 2003 and 2007 at Road Atlanta
– Is contesting his first race in the R18 TDI since Le Mans
"I’m happy to be sitting in the cockpit again. Since Le Mans I’ve had one opportunity to test the R18 TDI, at Le Castellet. I really like the R18 because its handling has been notably pleasant since the winter tests. Since June I’ve been waiting for my next racing commitment with Audi. In the USA ‘Petit Le Mans’ is a big and important race. I finished as the runner-up there once, only a few tenths behind an Audi, by the way. Hopefully we’ll be able to win this time. I’m highly motivated."

Marcel FÃ¤ssler (35/CH), Audi R18 TDI #1 (Audi Sport Team Joest)
– Started from position three in the fastest Audi at Road Atlanta last year
– Was the runner-up together with Timo Bernhard at the ILMC race at Silverstone
"We’re expecting a very large field at Road Atlanta. Traffic will be even heavier than usual. It’s difficult to overtake at the ‘Petit.’ There’s only one long straight. But that’s the same situation for everyone. We should be among the front runners. I’m already looking forward to this nice race track."

Dindo Capello (47/I), Audi R18 TDI #2 (Audi Sport Team Joest)
– Clinched his victory for Audi at Road Atlanta in 2000
– With five overall victories under his belt, is the record holder at "Petit Le Mans"
"For Road Atlanta I’m returning to the cockpit of the R18 TDI. I tested the car just a few weeks ago. That was very nice because I last drove the car on a warm-up lap for Le Mans. ‘Petit Le Mans’ is one of the races I enjoy most. I’m holding a victory record there. And it would be nice if I could add another success to my track record. We’re at least on a par with our competitor Peugeot but have to cover the distance without any problems to achieve a good result."

Tom Kristensen (44/DK), Audi R18 TDI #2 (Audi Sport Team Joest)
– Won for Audi at Road Atlanta in 2002 together with Dindo Capello
– Recently started at Silverstone from the first row with Allan McNish
"We’re all looking forward to Road Atlanta. ‘Petit Le Mans’ is the grand slam of the sports car scene, along with Sebring and the Le Mans 24 Hours. The track is an extreme challenge. It’s like a roller-coaster with crests, downhill stretches, raised and dropping corners where you can’t see the apex in some cases. And the track is relatively narrow. There are also a lot of directional changes. The fans really support the race and make for a spectacular show. Almost 60 cars are jostling for a place in the field. That’ll be strenuous for us in the cockpit because we’re fighting for every centimeter, if not to say millimeter, on the track. The competition between Audi and Peugeot is extremely close. Small things make the difference. I’m hoping for us to be able to fully use our potential and to bring the big trophy home."

Allan McNish (41/GB), Audi R18 TDI #2 (Audi Sport Team Joest)
– Has celebrated overall victory with Audi there four times
– Last won there in the Audi R10 TDI with Dindo Capello and Emanuele Pirro in 2008
"It’s always nice to return to the ‘Petit Le Mans race.’ I already contested the inaugural round in 1998. I’ve enjoyed every single race so far. The atmosphere is like a carnival. The track is wonderfully fast and has seen some very thrilling races. At three or four rounds only seconds or even tenths of seconds made the difference in the end. I’m expecting an extremely tough competition. The American fans will turn the event into a huge festival again. It’ll be a cracker – guaranteed!"

The Audi drivers at Road Atlanta

Timo Bernhard about Road Atlanta: "You reach an incredible speed on this track. Except for turn seven all the corners are very fast. The many directional changes within a lap also stand out. Particularly the ‘Esses’ are very challenging. It’s difficult to find a good set-up for them. After you’ve been at the wheel for a long time you can really tell what you’ve accomplished because of the high ’g’ forces. In addition, there are many differences in elevation. You often can’t see the track behind the crests. It’s very dusty when it’s dry and it floods the circuit when it’s wet. The best places for overtaking are in turns 10 and 11. But watch out, if you overtake a car in the left-hand turn it is normally perfectly placed to counter in the next right!"