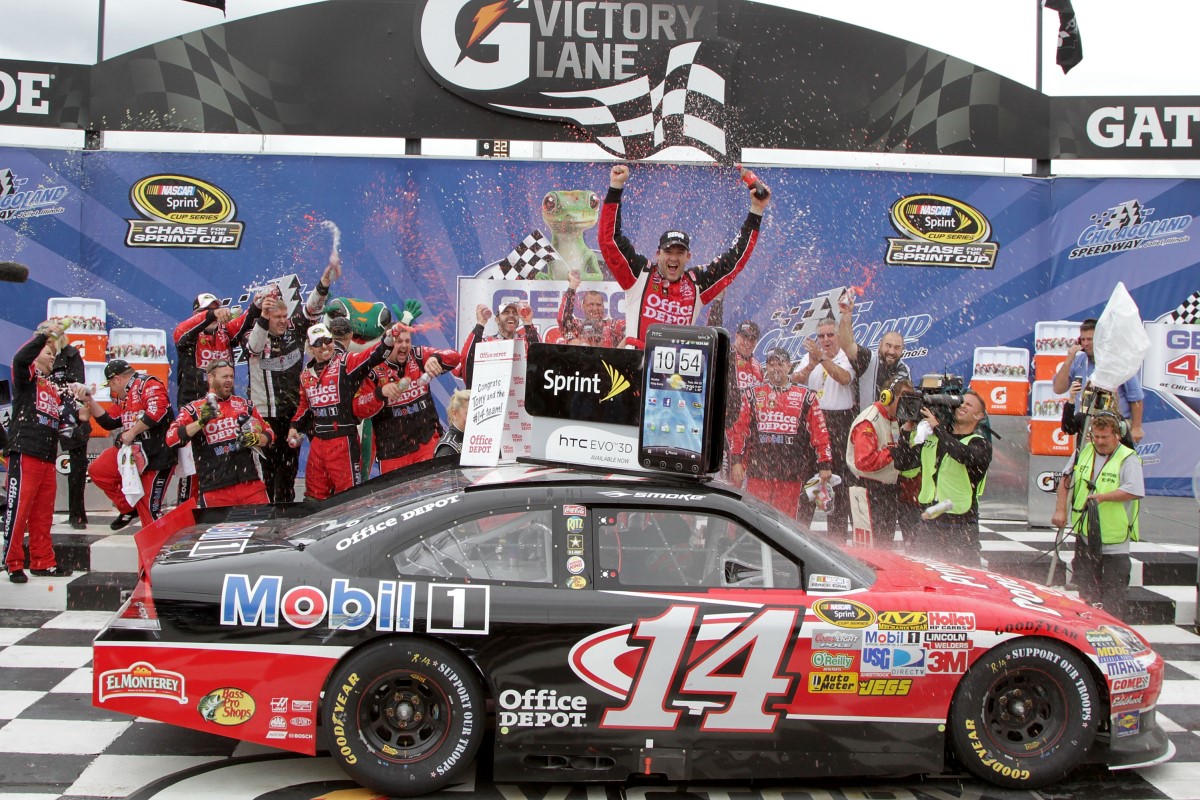 Winless no more. Poor-mouthing Tony Stewart, who four days ago minimized his chances for a third Sprint Cup title, outlasted the field in Monday's rain-delayed Geico 400 at Chicagoland Speedway.

Stewart, who started 26th, crossed the stripe 0.941 seconds ahead of hard-charging Kevin Harvick to win his first race of the season and the 40th of his career, tying him with Mark Martin for 16th on the all-time list.

This is the same Stewart who had said at Thursday's Chase media day in Chicago that there were seven drivers who could win the Chase — and he wasn't one of them.

"Counting Tony Stewart out — that's pretty funny that he counts himself out," said Harvick, who took the Chase lead by seven points over second-place Stewart. "He's won a ton of races to start off the Chase like they did today.

"[He has] the notes and teammates and things to lean on at Hendrick Motorsports and Ryan [Newman] and all the stuff they have to lean on, there's no way they're going to be totally out to lunch. So I think that's yet to be seen. So he ran strong all day and drove from the back to the front and led the race and won the race.

"So he shouldn't count himself out — that's pretty funny."

Dale Earnhardt Jr., who saved enough fuel to get to the checkered flag, came home third, after other contenders — five-time defending champion Jimmie Johnson among them — ran out of gas ahead of him.

Carl Edwards ran fourth, followed by Brad Keselowski and Kurt Busch, as drivers in the Chase claimed the top six positions. Johnson finished 10th after NASCAR demoted pole-sitter Matt Kenseth — also out of gas — to 21st for getting a push from J.J. Yeley through Turns 3 and 4 on the final lap.

NASCAR rules prohibit one car from assisting another on the last lap.

Last year, in the first Chase race at New Hampshire, Stewart gambled on fuel mileage — and lost. He finished 24th in that race, severely damaging his title chances. Stewart said he wasn't thinking about New Hampshire in the closing laps — just about the interval between his No. 14 Chevrolet and the cars that were chasing him.

"You hate to have to play the fuel-mileage game, but that's just the way the caution came out," Stewart said. "We came in and got fuel [on Lap 214 of 267] and [crew chief] Darian [Grubb] said we had to save a lap's worth of fuel, but we had a whole run to do it.

"I felt like we had saved enough to get us to the end, but we came off Turn 2 after we got the checkered, and the fuel pressure was down to two pounds, and it stayed there until just shortly after we picked up the checkered flag at the flag stand."

Given his position entering the Chase — 12 points behind Kyle Busch and Harvick — Stewart felt he could take the chance on fuel.

"We didn't have anything to lose," he said. "Where we're at in the Chase right now, we had to press."

Kenseth took the lead from Martin Truex Jr. on Lap 228, 10 laps after a restart forced by the sixth caution of the race, for debris. Stewart passed Kenseth for the top spot through Turns 3 and 4 on Lap 238, with Kenseth needing to save fuel and not contesting the position.

Though Stewart briefly surrendered the lead to Truex in the closing laps, the No. 14 team wasn't worried, because Truex couldn't go the distance and had to pit for fuel. Truex finished 18th.

The first Chase race worked out brilliantly for Earnhardt, who ran out of fuel off Turn 4 on the final lap. Earnhardt was mired in traffic for much of the afternoon but worked his way into the top 10 during the final fuel run — and then let attrition take its course.

"I just knew we were going to get a good finish if we didn't run out of fuel," Earnhardt said. "I was happy where we were. I thought we had really improved throughout the day. And, yeah, it felt a lot similar to how we ran earlier in the year where we would … use strategy to improve our finishing position."

The second race of the Chase is Sunday at New Hampshire Motor Speedway.