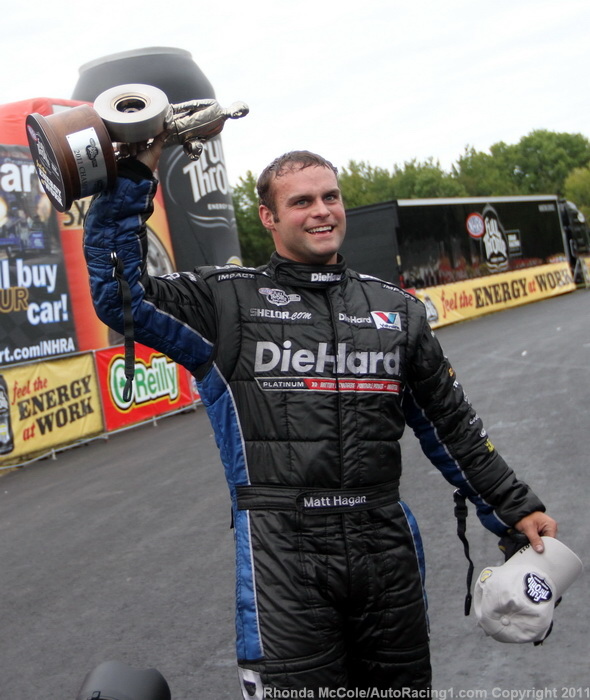 In a weekend that saw track records fall across the board, Sunday was no exception as new national records were set in Top Fuel with Tony Schumacher making the fastest run in NHRA history at 327.90 mph, and Matt Hagan secured the national record for low ET in Funny Car, backing up his 3.995 effort from Friday’s qualifying session.

Hagan was perfect for the weekend, taking the national ET record, the track ET record and the no. 1 qualifier before taking down points leader Mike Neff in the finals to nail his first victory of the season and fourth of his career.

While he had the track record locked up, Hagan still needed to run at least 4.034 order to secure the national record and 20 precious bonus points.

Hagan ended the drama in the opening round, beating out Jim Smith with a 4.018 at 322.27, setting the national ET record and breaking the track speed record to boot, shattering the mark set on Friday by “Fast" Jack Beckman by more than four mph.

Hagan then went on to beat Cruz Pedregon and then Beckman to get to Neff, who bested Tony Pedregon, Tim Wilkerson and Johnny Gray.

Facing each other in the finals for the first time in their careers, Neff got the better light to grab the early lead, but the car started to break loose at the 600-foot mark and Hagan was able to speed by as Neff got out of the throttle, posting a 4.130 at 301.07 mph at the line.

“It’s something else to sit in a race car when it has that kind of potential," said Hagan. “This is the third national record we’ve set with this car and that’s phenomenal to me. To have a group of guys around you like (crew chief) Tommy DeLago, (assistant crew chief) Glen Huszar, and all the guys who beat this thing up and put it back together is phenomenal. It’s truly a fairy tale deal to go out there, set the record and win the race."

Hagan jumped from sixth to second in points with the victory and the bonus points, 22 behind Neff. Beckman, Cruz Pedregon and Robert Hight round out the top five.

Antron Brown scored his third straight victory with a win over his teammate Spencer Massey in the Top Fuel final, tallying his sixth Wally of the season and 31st of his career.

Coming into Sunday’s eliminations as the fifth-place qualifier, Brown defeated T.J. Zizzo, Bob Vandergriff and teammate Tony Schumacher to move onto his 61st career final round and his third against Massey, who took down Dom Lagana, Doug Kalitta and defending race winner Larry Dixon to advance to the finals for the 10th time.

In the final, it was Massey getting the jump at the start, only to go up in flames halfway down the track, handling the win to Brown who goes 3.784 at 325.14 for the victory.

With the win, Brown takes over the points lead by 10 over Massey. Del Worsham fell to Vandergriff in the opening round and fell to third in the points, ahead of Dixon and Schumacher.

“The radar is on us now, so we have to dig harder with all these guys gunning for us," said Brown. “When we raced Tony Schumacher (in the semifinals), we had nothing to lose. He was running on a whole ‘nother level. Our Aaron’s Matco Tools guys threw the kitchen sink at it and threw the whole tractor-trailer with it. We threw our other tractor-trailer at it again for the final."

Kurt Johnson won his first event in over three years with a red-light victory over Jason Line to ruin Line’s perfect weekend.

Johnson, starting from the sixth qualifying spot, topped Benny Perkinson, Greg Stansfield and Vincent Nobile to earn his 76th-career final round berth against Line, who entered the day as the no. 1 qualifier after setting the track low ET record with a pass of 6.510 in Friday’s qualifying session.

Line had advanced past V Gaines, Erica Enders and Steve Kent to reach his sixth final round of the season, but missed the light by .003 seconds.

Johnson ran 6.545 at 210.97 mph for his 40th-career win, his first since winning the Route 66 Nationals in Chicago in 2008.
“It’s been a real battle and we finally figured out that maybe we needed a new car," said Johnson. “I brought this car out in Bristol and didn’t qualify, but we’ve been adapting and it really started to thunder in Brainerd. It’s totally different than anything we’ve had since about 2003, but I think we know what to do with it now and it’s proved itself today."
Despite the loss, Line managed to leapfrog teammate Greg Anderson to take the Pro Stock points lead by 31. Nobile, Mike Edwards and Enders make up the rest of the top five.

Pro Stock top qualifier Eddie Krawiec won his third national event of the season with wins over Steve Johnson, Hector Arana III and Michael Ray and then taking the final over Karen Stoffer who red-lighted at the start.

Krawiec held the no. 1 spot throughout the weekend qualifying sessions, setting the track low ET mark with a run of 6.810, then went 6.870, 196.42 in the final, keeping him at the head of the field in the PSM points by 63 over Stoffer.