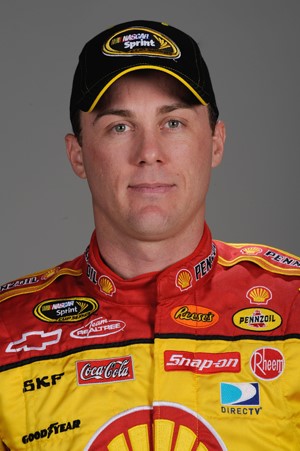 During the NASCAR weekend at the New Hampshire Motor Speedway there were a lot of comments, reflecting a wide variety of issues, that were more than worthy of pondering and repeating. Here are just a few of them:

Let's start with the one comment that pegged the speculation meter at New Hampshire. That would, of course, be the radio transmission by Kevin Harvick regarding a previously unknown conversation with NASCAR officials warning him not to hit rival Kyle Busch on the race track.

We all know the story behind NASCAR's most popular rivalry from the 2011 season. Both drivers were placed on a four race probation period following that famous pit road altercation at the Darlington. Richard Childress, Harvick's team owner, was fined $150,000 and placed on probation for punching out Busch after the Kansas race. Harvick raised some NASCAR concerns at Pocono when he forced Busch to the bottom of the track, during the final race of their probation period. It was referred to as a reminder that Harvick hadn't forgot that Busch still had one coming.

During the NASCAR Nationwide Series race at New Hampshire, Harvick and Busch were racing each other hard for position. The network television cameras were aimed on them, the fans were watching carefully and so were NASCAR officials. The anticipation level that said we were going to see the latest round of this feud simply could not be measured.

All of a sudden Harvick eased up, came over his radio and said: "he would have never made it if, (NASCAR President), Mike Helton hadn't told me hit him and he'd park me. It's not about have at it boys, it's more like have at it except for that one." There was also a comment by Harvick that said he felt like he "was driving with handcuffs on."

After the race the media was all over those comments. Addressing the issue in a more formal atmosphere, Harvick said "I was told a few weeks ago, (presumed to be during the NASCAR weekend at Michigan), that if we touched the #18 car we'd be parked. I've just got to be really careful. I would have liked to have gotten the track position and slid up and do what I needed to do. But I've got to be really careful, that's the way NASCAR put it to me." After the race Kyle Busch said he had received no such warning from anyone.

However, a very interesting prepared statement from NASCAR spokesperson Kristi King read: "IF there was a conversation between Kevin Harvick and Mike Helton it would remain private"

WAIT A MINUTE ! "IF THERE WAS A CONVERSATION" ? One has to assume that this conversation did indeed take place between Harvick and Helton. Harvick's comments during and after the New Hampshire race strongly supports that theory.

Robin Pemberton, NASCAR Vice President of Competition, later indicated that these private conversations between officials, drivers, team members and owners are rather common place and was another method of maintaining law and order at the race track.

Regarding Harvick's comments on his radio, while racing with Busch, Pemberton said "you listen to these guys all day long and they're going to say something that somebody can make a big deal out of. A lot of times, in the heat of battle, you've got to take them with a grain of salt. You can't get too worked up about what people say under pressure. It's just the way things are."

But one has to wonder if all of this creates another layer of confusion regarding exactly what is covered by NASCAR's "have at it boys" policy and what is a violation worthy of a penalty.

Also from the NASCAR Nationwide Series race at New Hampshire was some controversy regarding Steve Wallace, the driver of the #66 Five Hour Energy Toyota owned by his father Rusty Wallace. On lap 107 Wallace got into the back of Jason Leffler and sent him hard into the retaining wall. Prior to that, Wallace alleged that Leffler has been beating and banging on his car for several laps. Whether or not this was simply a racing deal, or a "have at it boys" act of retaliation I suppose depends on your individual perception of the video replays. Wallace, despite being involved in two major incidents during the last half of this race still managed to finish ninth in the race while Leffler finished 30th while taking a hit in the points.

Leffler was surprisingly diplomatic during his post wreck live television interview. But what these drivers say on live television and what they say while using the social network phenomenon known as "Twitter" are often two different things. In one of his "Tweets" Leffler wrote: "Steve Wallace-the official TOOL of the NNS", (NASCAR Nationwide Series). In a separate "Tweet" Leffler wrote: "I just read some of Steve Wallace's quotes ! The guy is out of his mind. That's if he even has one !"

But the "Twitter" comments didn't stop there. A comment from "31n2 Spotter" read: "I would like to thank Steve Wallace 4 driving like a complete moron for 200 consecutive laps 2 day. I would never spot for that idiot."

That comment caught the attention of Kevin Harvick who responded with "wish 5 Hour Energy could invent a "for 2 hours U aren't a moron formula."

A quick check of Steve Wallace's "Twitter" account did not turn up any comments, relative to the New Hampshire race, as of late Tuesday night. His only comment worth repeating said "Twitter is funny because it gives people a chance to hide behind computers and talk s**t."

All season long we have been observing a rather interesting concept regarding the pit crew belonging to Jimmie Johnson's #48 Hendrick Motorsports team. Crew chief Chad Knaus has been using a platoon system this year. In other words, there's no guarantee that the same crew members will be vaulting off of the pit wall from one weekend to the next. Each and every week the crew members participate in a training and audition session that determines who keeps their job and who stays home the following weekend. It's a very similar concept used by coaching staffs from the other major American sports.

In an age where track position means everything, there's a lot of pressure on these pit crews to perform flawlessly. There has been a noticeable, not to mention consistent, problem with the Johnson crew as of late and it all seems to involve lug nuts. It happened again at New Hampshire. A routine pit stop turned into a case of a missing lug nut and Johnson had to come back to pit road to have it replaced. He entered pit road the first time as a major player in the race. He left pit road the second time looking at a 33d restart position.

This latest pit road miscue has apparently pushed Johnson's patience to the breaking point. After the New Hampshire race he said "when it's key times for stops we have mistakes. I've been real patient all year but I'm running out of patience. I care for these guys deeply for going over the wall and I know they're very talented guys, but we're getting into my livelihood. In a little bit we will get into the Chase and we've got to get it right. We've been working and we've been patient as a group trying to mature some guys and get some stuff ready, but we can't have these mistakes anymore."

Yet another source of frustration for Johnson, during the New Hampshire Sprint Cup race, was a spin out he felt was helped along by driver Juan Pablo Montoya. Commenting on that situation, he said "the #42, I don't think the three times he wrecked me it's been intentional, but he's all out of mulligans. I've had enough of oh, I'm sorry and you're spun out. It's happened way too often for the #48 team."

I bet some of you are thinking the same thing I am right now. You're wondering if Johnson's comments regarding Montoya are going to lead to another one of those "private" conversations with a NASCAR official aren't you?

During the NASCAR Sprint Cup race at New Hampshire we all watched another frustrating afternoon for Dale Earnhardt Jr and his #88 Hendrick Motorsports team. This team has been on a down hill slide as of late that has seen them free fall from third to ninth in the championship standings. The team is so close to falling out of the top ten there is now concern regarding whether or not they will make the Chase line up.

During the live radio broadcast of the New Hampshire race there was an interesting comment made by PRN, Performance Racing Network, that actually used civil war terms to exemplify Earnhardt's current state of frustration. That PRN comment said "this race is Gettysburg for the #88. He can be on the winning side or the losing side. Right now he looks like General Robert E. Lee out there."

I suppose it would have been far better for the #88 team to resemble the aggressive, whiskey sipping, General Ulysses S. Grant.

The final comment this week belongs to the always fun Kenny Wallace who seems to be willing to share just about anything with his "Twitter" followers. In a recent "Tweet" Wallace wrote: "my wife is having hot flashes. Does anyone know what that means? The equally delightful DeLana Harvick saw the comment and responded with: "that means you need to be super duper nice to her."

This is why we all love Kenny, Herman The German, Wallace. It's also why some comments just bear repeating.