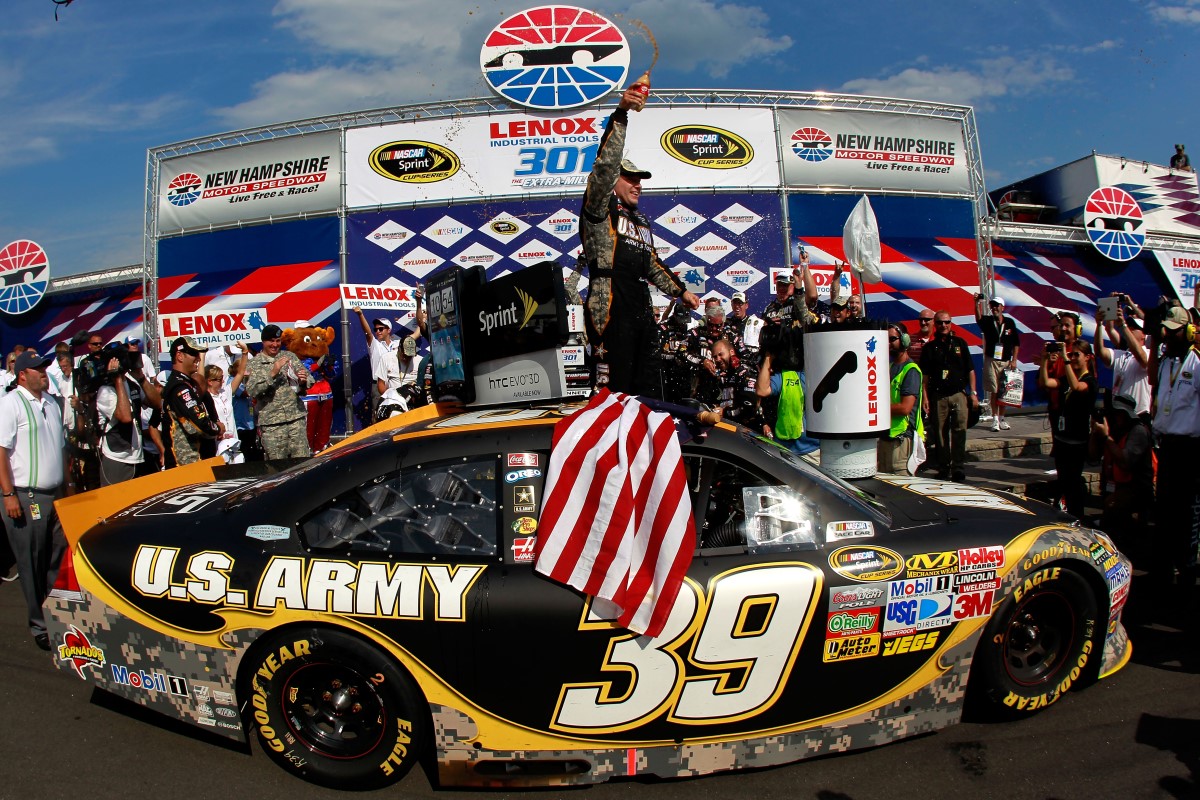 During the NASCAR weekend at the New Hampshire Motor Speedway we witnessed a phenomenal performance from a team that was overdue for something phenomenal. We witnessed another landmark set of numbers from NASCAR's "Rowdy" one. We also learned that NASCAR's "other Rowdy one" was driving with a pair of handcuffs on. With those thoughts in mind, let's begin this week with:

THUMBS-UP to Ryan Newman, Tony Stewart and the gang from Stewart Haas Racing for their one-two punch at New Hampshire. That process began on qualifying day. Known as "The Rocket Man" for his qualifying prowess, Newman claimed the Coors Pole Position while "Smoke", his team mate and team owner, posted the second fastest time. The Stewart Haas Racing tandem took that effort one giant step further by finishing one-two in the Lenox Industrial Tools 301. The significance of this performance is huge because it's very difficult to accomplish and not often seen. In fact the last time team mates scored a one-two finish from the front row occurred back in 1989 when drivers Darrell Waltrip and Ken Schrader accomplished the feat for Hendrick Motorsports.

THUMBS-UP for Newman's crew chief, Tony Gibson, for an outstanding performance despite having to deal with the typical drama that comes with late race fuel issues. Well aware that his car was two or three laps short on fuel, he put his driver into the conservation mode. "I'm sure he got tired of hearing it, but he really showcased his talents out there," Gibson said after the race. Obviously the plan worked. Newman had enough fuel to secure the win but not enough to complete his post race burn outs.

THUMBS-UP for Tony Stewart's crew chief, Darrien Grubb, who also did an outstanding job on the pit box despite suffering horribly from symptoms of pneumonia.

THUMBS-UP to Newman for also winning the NASCAR Whelen Modified Tour race on Saturday morning in an open wheel car owned by veteran NASCAR Sprint Cup crew chief Kevin "Bono" Manion. No one in NASCAR history has won, from the pole position, two races in one day. Another THUMBS-UP goes to the video shot of Newman and his beautiful baby daughter doing a victory lane high five after winning this race.

*************
For the first time ever we have a double THUMBS-UP for making chicken salad out of chicken do do and both of them are awarded to Hendrick Motorsports drivers. The first one goes to Jimmie Johnson who recovered from another costly pit road miscue and a spin out to somehow score a fifth place finish. The second award goes to Jeff Gordon who lost his electrical system and had to sit through a lengthy pit stop while the crew installed a new battery. Then, on the final lap, he ran out of gas and limped across the finish line with a flat tire. Somehow, he managed to salvage an 11th place finish from all of this frustration.

WHAT'S-UP with another lengthy, not to mention costly, pit stop for Johnson and Lowe's #48 team? A missed, or even loose, lug nut following a pit stop is going to happen from time to time. However, it seems it's been happening to this team a lot as of late. After returning to pit road to install the lug nut, Johnson found himself having to restart in 33d. The NASCAR Sprint Cup Series has next weekend off and Johnson made it perfectly clear that he wants some of that time off to be spent on resolving this problem once and for all.

WHAT'S-UP with the possibility of yet another rivalry between two Sprint Cup drivers? Johnson suffered a late race spin out on lap 241 and made it clear that he felt Juan Pablo Montoya was the cause for the effect. He also made it clear that it isn't the first time he's had problems with this driver and announced that Montoya "is all of out mulligans and I've had enough."

WHAT'S-UP with the electrical problems with two of the Hendrick Chevrolets? In addition to the aforementioned battery change for Gordon's car, his team mate Mark Martin also found himself on pit road waiting for a new battery to be installed. Both of these teams operate out of the same shop building at Hendrick Motorsports and you can bet electrical systems was a high priority on their check list Monday morning. By the way, Martin's woes came after an on track spin out, and a near spin out on pit road, which was followed by the battery change and a disappointing 22nd place finish.

Then there's the matter of the Junior Nation. WHAT'S-UP with another sliding backwards performance from the #88 Hendrick Motorsports team? Is the hot summer weather getting to them? In the four races, prior to last Sunday's New Hampshire event, Dale Earnhardt Jr has been on a tailspin and has fallen from third to ninth in the championship standings. The team is now perilously close to falling out of the coveted top ten that needed to make the Chase line up. His New Hampshire 15th place finish didn't help matters any. The effort was hampered by when a tire was errantly left on pit road following a pit stop resulting in a penalty. But there was a lot more than just a tire penalty going on here. The car was simply not performing properly and the driver returned to his old habit of graphically expressing himself on the radio with verbiage that could not be replayed on live television or radio. Here's another team that needs to spend their time off this week figuring out "WHAT'S-UP"?

WHAT'S-UP with melted tire beads, caused by extremely hot brakes, that hampered the Chase hopes of two drivers. The first was Kyle Busch whose melted tire caused him to slam into the wall. The result was a 36th place finish and a major hit in the points that saw him drop from first to fifth in the standings.

The exact same thing happened to Brad Keselowski whose wall banging moment left him with a 35th place finish. Prior to this race Keselowski was lined up to become a major player in the wild card selection of the Chase line up. Those new rules awards a play off berth to the two drivers, in points positions 11 to 20, with the most wins. Going into New Hampshire Keselowski had dug himself out of a huge points hole and was 21st in the points only three markers away from the top 20. He was in line as a wild card candidate based on his win at the Kansas Speedway. But the New Hampshire wall banging moment now has the team back into a hold. They are now 23d in the standings and 25 points from the top 20.

THUMBS-UP to Kyle Busch for winning the NASCAR Nationwide Series race at the New Hampshire Motor Speedway and racking up even more impressive numbers in the process. Following his win in the New England 200, Busch now has six series wins on the season. Of greater importance is the fact that he's now tied with the legendary Mark Martin for most series wins of all time at 49. The New Hampshire win also marked his 100th win in a NASCAR national touring series. That breaks down to 22 wins in the Sprint Cup Series, 49 in the Nationwide Series and 20 in the Camping World Truck Series. All of these numbers have been accumulated at the age of 26. Again, whether you love or hate him, there's no ignoring the talent of this driver and his numbers.

There was a lot of celebrating in Tulare-California last Saturday. THUMBS-UP to Matt Crafton, a favorite son of that community, for his NASCAR Camping World Truck Series win at the Iowa Speedway. Crafton, and his Thorsport Racing team, has been often maligned by tough racing luck, often not of their making, and it was good to see them back in victory lane.

On the topic of talented California drivers, THUMBS-UP to David Mayhew who finished third in the Iowa truck series racing driving for Kevin Harvick Inc. I can recall interviewing this talented young man, when he was still in high school, after winning NASCAR late model features and track championships at the former Mesa Marin Raceway in Bakersfield. NASCAR team owners need to seriously keep an eye on this talented young driver who currently doing a good job in the NASCAR K&N Pro Series West. THUMBS-UP to DeLana and Kevin Harvick for giving this young driver this opportunity.