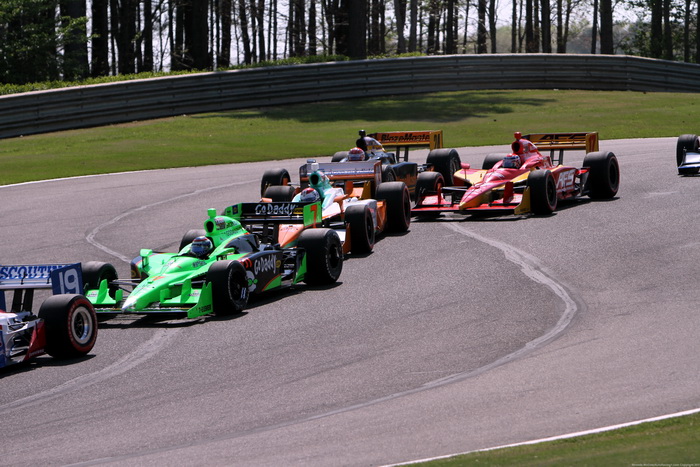 After this racing season the IndyCar paddock has around 80 IndyCars that will become, for all intents and purposes, useless. Sure, they can be used as show cars, but you don't need 80 cars for that. Other than that, 80 perfectly good IndyCars will sit in garages collecting dust. Meanwhile, the Indy Lights series has been contemplating what will be their next generation car. I say it should be the existing IndyCars, detuned to be made economical to run in a development series.

In NASCAR, the top-level Sprint Cup series owners pass their used cars down to the Nationwide Series. They eventually find their way down to ARCA and regional NASCAR series. A "NASCAR Car" looks the same – same size, same shape, same weight – regardless of what step in the development ladder you are on.

The benefits are many. I quickly came up with ten:

The first reaction I got in the IndyCar paddock last weekend to this idea (originally floated by Indy Lights boss Roger Bailey) was that the IndyCars are too expensive for the Lights team owners to afford.

With 80 cars soon to go into mothballs, there are enough spare cars and parts to supply an entire 26 car Indy Lights grid for three or more years without spending a dime. Well, OK, the IndyCar team owners are not just going to give their soon to be worthless cars away for free. Most owners we talked to said they would be happy to get $10,000 to $25,000 for each one. Sitting in the corner of their garage collecting dusts would net them zero revenue. If the Lights series would decide to replace the car with a new one, team owners would have to fork out much more than that for new cars and spares.

A typical development series, such as GP3, offers a cost-effective formula for budding racers, with budgets amounting to about $880k USD per year. But that is only a 280 HP car and the car itself is much smaller than an F1 car or IndyCar. Performance-wise, too big of a step from IndyCar in my opinion.

What about engines, the single most expensive part of any race car? I dropped by and spoke to Honda HPD boss Erik Berkman about whether Honda had a cost effective, lower HP, engine that could be run in the used IndyCars.

"Honda would welcome the opportunity to supply engines to the Indy Lights series, " said Berkman.

"I think we have the perfect engine. Our ALMS LMP2 turbo V6 engine makes 450 HP."

With the IndyCar engine making around 650 HP in the current car, a step down to 450 HP for Lights would be enough to reduce the speed of the car so development drivers could learn to handle the big cars, but it would also reduce the running stress on the entire drivetrain, thereby reducing wear and tear elsewhere on the car.

"I cannot give you exact numbers," said Berkman, "but I am sure we could provide the LMP2 engine, which is an endurance engine made to run many miles between rebuilds, for Lights at a price I think that could work for the Indy Lights team owners."

According to the regulations an engine for the LMP2 category cannot cost more than $100,000. For 2011 a race engine must be able to last 30 hours before being revised, while the revision costs cannot exceed $50,000. In the coming years the running time is set to increase from 30 hours to 40 hours and then to 50 hours – more than enough for an entire Lights season,

This engine cost is higher than the current engine, but the teams would save money on the cars. However, if the engine can indeed be made to last 50 hours between rebuilds, there would need to be just one engine rebuild per year at the beginning of the season.

"I would even be willing to share the Lights series, with say a Mazda," said Berkman. "I am sure the two companies could agree to match both engines so the performance is the same and I would love to talk to IndyCar about it"

Since the Lights cars do not make pitstops, fuel mileage differences between the two engines really would not matter.

I asked former IndyCar champion and current co-IndyCar team owner Jimmy Vasser about the idea. "I think it is a good idea if the costs are similar," said Vasser

I asked him, "as a former IndyCar driver, would he be more willing to drive an occasional Lights race if it was in the big cars instead of the smaller Lights car? "Yes, definitely," said Vasser.

I asked IndyCar team owner Dale Coyne what he thought of the idea and his reaction was, "That is what Roger Bailey proposed and I think it is a great idea. They is what IndyCar should do. What are we going to do with all these cars after this year?"

I spoke to former IndyCar driver and Lights team owner Bryan Herta about the idea, and he thought it was a good one if the costs to run the bigger car would not increase his annual budget.

"I can buy a set of uprights for my Lights cars for 1/4th the price it costs for the current IndyCar," said Herta.

But why are they 4 times more expensive? There certainly is not 4 times as much material to make them. From everyone I talked to in the paddock, they felt that the parts could be made in the USA for a lot less money than Italian manufacturer Dallara is charging.

However, it may be a mute point. With 80 leftover cars there are enough spare parts to supply the field for 3 years without making or buying any new pieces.

As it turns out, Tony Cotman of NZR Consulting, who works as a technical advisor to IndyCar on many fronts, has been studying this issue for the series for quite some time.

"We have, and continue to, evaluate that option," said Cotman. "We need to evaluate it seriously and look at it in parallel with other options. The advantages of using the existing car I agree with. It ultimately will come down to cost and the direction the series wishes to pursue in the future. The vehicles performance, relevance and engine regulations are all a large part of that equation."

I asked other Indy Lights team owners what they thought. They all said that if the costs were what they spend today, around $750K per year per car, it's an idea worth exploring.

Herta had organized a Lights team owners meeting in Toronto to discuss a number of issues facing the series, including whether the series needed a new car.

The general consensus was that the owners cannot afford a new car and maybe they should just update the existing car with a new body kit and wings.

Better yet, why not pass down the 80 existing IndyCars to Lights and make it a series that young drivers worldwide would clamor to get their hands on?