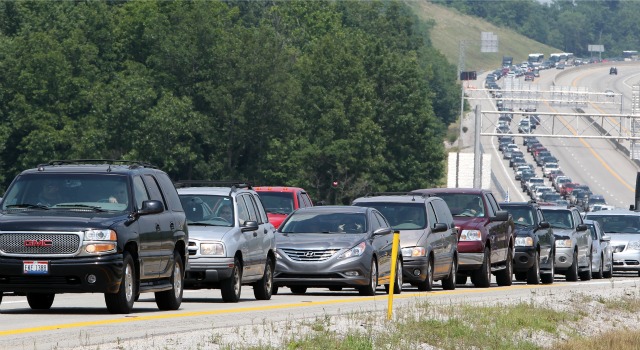 By now every NASCAR fan in the country is likely well aware of the traffic and parking trauma that created a public relations nightmare during the Kentucky Speedway weekend. Needless to say there has been a lot of comments on this matter since.

Some of the more interesting ones came from the social network phenomenon known as "Twitter" and "Face Book". It's only natural. When you're snarled in a hopeless traffic jam that's barely moving, with the dwindling hope that you're not going to get to see a race you paid hard earned ticket money for, then sending messages on your cell phone is a great way to spend the five hours stranded in a vehicle. Some of those comments truly represented the telephone term "4 G Face Burner."

The following are just two examples obtained from "Face Book": "Wow ! Paid $220 for tickets, took five hours to go 20 miles, saw a 67 lap race due to a SRO crowd taking all of the parking. Oh, and we walked three miles. All speedway memorabilia sold out, food and drink sold out. We are supposed to take this in the rear and shut up? Don't think so, refund please."

Another message read: "for those unfortunately fans who never made it through the grid lock disaster, Kyle Busch won the Not Ready For Prime Time Quaker State 400."

The Kentucky Speedway is owned by SMI, Speedway Motorsports Inc. It's one of the eight SMI owned race tracks that plays host to NASCAR's Sprint Cup Series. SMI is owned by Bruton Smith who is hands down one of the most interesting characters who ever set foot on a speedway. He'll be the first to tell you that he's "NASCAR's biggest customer."

One of the best self promoters in the business, Smith was all over the Kentucky Speedway property placing himself in front of every media microphone and television camera he could find. With that effort came some genuine Smith verbal gems on a variety of subjects.

Seemingly knowing well in advance that his fans were going to have a major traffic problem coming off of Interstate 71, Smith went on the offensive, as well as the SPEED Channel, and announced that he was going to "pressure" the Governor of Kentucky to make needed road improvements in that area because his race track was going to turn Sparta-Kentucky into the third largest city in the state. "Interstate 71 sucks," Smith said adding "it's the worst interstate I've ever been on. It's a disgrace to the great state of Kentucky. We hope to get everybody out of the area and home by Tuesday. You don't even want to be on it, (interstate 71), This is the worst section of interstate highway in America. The Governor and I have talked about that. Don't go on I-71, you're not going to win."

However, traffic wasn't the only issue that had Smith going on the offensive that weekend. There were driver concerns regarding whether or not the Kentucky Speedway had an adequate amount of energy absorbing SAFER barrier walls around its 1.5 mile oval.

That concern was primarily led by drivers Jeff Gordon and Tony Stewart. Commenting on his safety concerns, Stewart said "they don't have enough SAFER barriers yet, not near enough SAFER barriers for what we're doing here and how close the wall is to the race track. Hopefully, none of us will have to test that out."

When the issue was presented to him by the SPEED Channel, Smith replied "I have not talked to Jeff and Tony, but tell them just to drive where Kyle Busch goes, If they will do that, they won't have to worry about any padding." It was almost as if Smith knew Busch was going to dominate the NASCAR Sprint Cup debut at his race track.

There were also driver concerns regarding the state of the track surface which contained a series of bumps especially in turns three and four which turned out to be troublesome all weekend long. Smith said the track had "character" and added "maybe we'll look at repaving after the 2013 race."

In still other Kentucky Speedway comments that deserve to be repeated, Smith was asked about the possibility of his annual Sprint Cup race becoming as popular as the most famous race in Kentucky. That of course would be the Kentucky Derby. Without a second's hesitation, Smith replied: "we will outdraw that horsey event and we will have a bigger impact."

It's hardly a big secret that Smith seriously wants a second Sprint Cup date for his SMI owned Las Vegas Motor Speedway. The annual numbers from the track's lone date in March easily supports that argument. It's safe to assume that the fans are solidly behind the idea as well. Any fan who has ever spent a NASCAR weekend in Las Vegas will stand proud and testify regarding how much fun it is.

If the prospect for a second Cup date at Las Vegas isn't likely anytime soon, Smith would love to see his March race moved to November. NASCAR's final race of the season will again be held at the Florida based Homestead-Miami Speedway. After that, it's off to Las Vegas for the annual champions week and the gala Sprint Cup awards banquet. To Smith it makes all the sense in the world to finish off the regular racing season, as well as NASCAR's Sprint Cup Chase For The Championship, at the Las Vegas Motor Speedway and then head downtown for the annual party. There seems to be a lot of fans who supports that idea as well.

When asked about the prospect of a Las Vegas date change, Smith quickly replied "yeah, we need to get that last race out of North Cuba."

Seriously Bruton? North Cuba? It's easy to imagine the reaction that the Beach Boys, (that would be NASCAR officials in Daytona and not the famous rock n roll band), must have had when Smith let that comment fly.

Was the comment appropriate? In all honesty not really. Was the comment politically correct? That's hard to say because the PC boundaries seem to constantly change and we're no longer sure what's a joke and what's an insult. Was the comment funny? If I may borrow a quote from famed comedian Larry The Cable Guy: “that’s funny I don't care who you are." Should yours truly be chastised for laughing to the point of pain when I heard this comment? Okay, I guess I should have displayed an extra ounce of self control and been a little more sensitive to the feelings of the "North Cubans."

Anytime Bruton Smith talks about any topic he always has my attention. Because I know he's going to make a comment that deserves to be repeated.