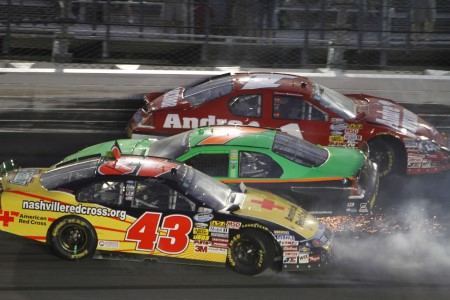 Why are so many fans attracted to a sport in which drivers seemingly spend hours racing around in circles?

The answer is simple, yet one most NASCAR fans—and competitors—don’t like to admit: They love to see racecar drivers wreck.

It’s not just the speed or the daring or the remarkable skill that it takes to drive a 3,400-pound stock car at 200 mph.

It’s the possibility that those drivers might wreck. They might slam into a concrete wall, go spinning wildly down the straightaway, flip their car end-over-end, fly into the catch fence, or simply run into each other.

And then remarkably climb out of their battered machines uninjured. And hopefully, as an added bonus, be ticked off at the driver who wrecked them.

Fans love to see NASCAR’s daredevils flirt with disaster and show the raw emotion that comes with a good day suddenly gone bad.

It’s similar to the attraction casual sports fans have for football’s bone-crushing tackles, hockey fights or a flagrant elbow in the NBA.

Deep down, sports fans like their games to be physical, emotional and even a bit violent.

And nothing is more physical, emotional or violent than a racecar driver slamming into a concrete wall, or another car, at 200 mph.

So NASCAR needs its drivers to wreck.

And there’s not nearly enough of that happening this season. As NASCAR chairman Brian France so bluntly put it a couple of years ago, NASCAR should be a contact sport, and so far this season, there has not been nearly enough contact.

There’s been some high drama—it doesn’t get much more dramatic than watching a jet dryer burn after a driver has crashed into it—and some good racing. But there’s been very little of what race fans want to see most. Read more about NASCAR lunacy at Sporting News