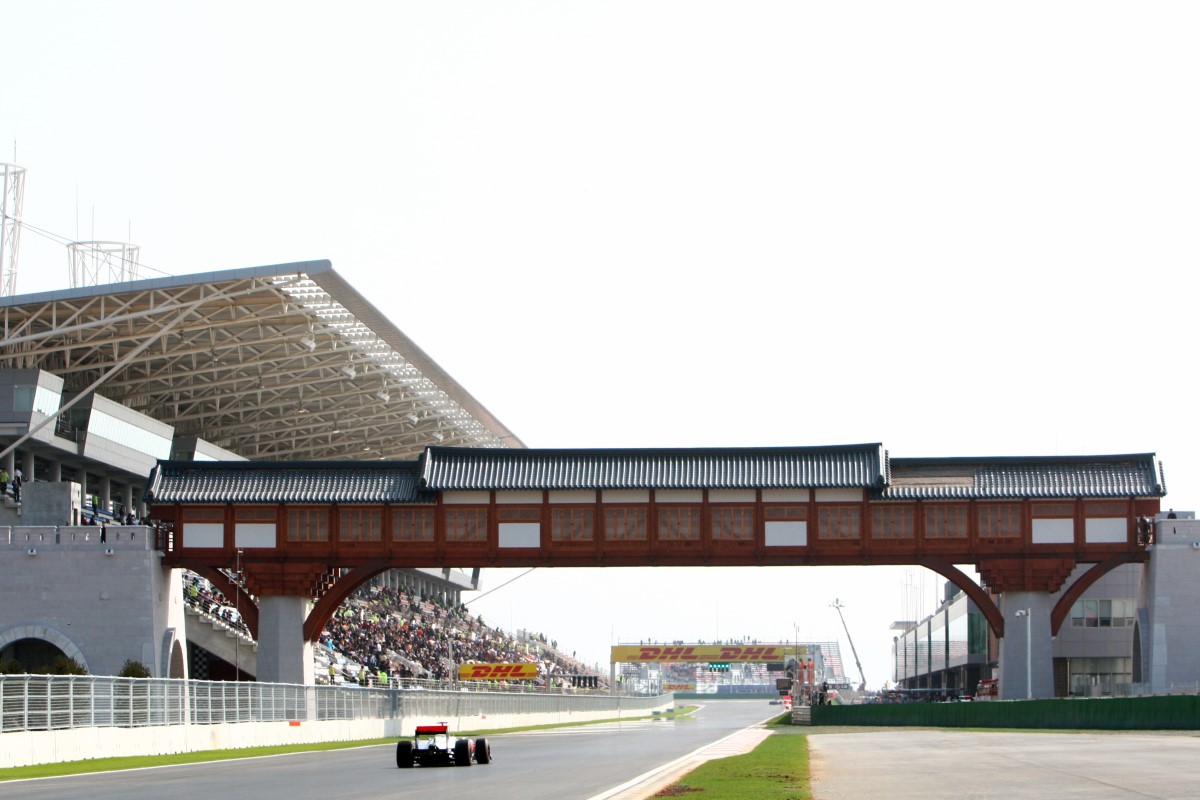 Korea GP to be 'more satisfactory' in 2011
(GMM) Korea is expecting a smooth running of its formula one race weekend next month.

Last year, when the new Yeongham circuit hosted the inaugural Korean grand prix, many visitors were disappointed with construction delays, poor management and the fact they had to stay in so-called 'love motels'.

"In terms of customer service, we expect this year's F1 race to be much more satisfactory," the organizers added.

Re-hiring Brawn not the answer – Montezemolo
(GMM) Luca di Montezemolo has rejected calls Ross Brawn should be lured back to Ferrari.

Ferrari has not won a drivers' title since 2007 but the Maranello marque's president Montezemolo insisted at Monza that he fully supports the reign of team boss Stefano Domenicali.

"The management of the team will remain unchanged," the Italian added this week at the Frankfurt Motor Show, according to Finland's Turun Sanomat newspaper.

"There are some small repairs to make, but it is not related to the key positions."

Elements of the Italian media and Ferrari's passionate 'Tifosi' have suggested the team should reunite with Briton Brawn, its former technical director, and once again have designer Rory Byrne in a key role.

"The hiring of Ross Brawn has been proposed but surely it can be seen how hard he has had it at Mercedes," Montezemolo insisted.

"We have chosen the path of stability," he continued.

"Should I be sorry?" he is quoted as saying by Corriere della Sera. "No, because we are always among the protagonists.

"The abolition of track testing penalized us strongly, as ours is a culture of the mechanical, unlike the English (culture of) aerodynamics.

"And then there are the rules that are too restrictive on the engines, with the technicians frustrated with their inability to increase the horse power," added Montezemolo.

Mercedes 'not big enough' to win admits Rosberg
(GMM) Mercedes is having to become a bigger team in order to win races as a constructor.

That is the claim of Nico Rosberg, who has been Michael Schumacher's teammate for the past two years and will stay with the Brackley team in 2012.

Rosberg, 26, is also tipped to sign a much longer contract, in which he hopes to take the benefit of boss Ross Brawn's efforts to improve the team structure.

Brawn radically downsized the team in the wake of former owner Honda's departure from the sport at the end of 2008.

The British engineer admitted to F1's official website this week that "possibly we have been a little bit too optimistic" in cutting staff numbers.

"We need to move up to the (staff) limitations that are allowed," he revealed.

German driver Rosberg agrees: "The team has not been big enough to build a winning car, but we have recognized the situation and are strengthening the organization.

"We are now developing rapidly and new faces are showing up all the time," he told Italy's Tuttosport. "It shows there is a great desire to improve."

Ferrari hails Perez after test in 2009 car
(GMM) Ferrari had high praise for Sergio Perez after the Mexican on Thursday tested one of the Italian team's single seaters for the first time.

A race rookie with Sauber in 2011, 21-year-old Perez is also a leading member of Ferrari's driver 'academy' and tipped as a possible future replacement for Felipe Massa.

"Sergio proved to be aggressive and quick right from the start and was able to adapt to the car in a very short space of time," said academy chief Luca Baldisserri.

"He is very mature for his age, displaying an understanding that goes beyond the time he has spent driving single seaters."

Perez's best time, however, was eclipsed by the other academy member Jules Bianchi, a French GP2 driver and Ferrari's official reserve in 2011.

Perez admitted his objective is to race for Ferrari one day.

"It's impossible to say how things will go and my dream is to become world champion and it would be nice if it could happen with a team like this one," he said.

Also with praise for Perez this week is Ferrari team boss Stefano Domenicali.

"I think he's having a great season," he is quoted by Spanish sports daily AS. "He will be a great race driver in formula one as he has started with a good approach and humility and he can grow a lot."

The 25-year-old actually raced the R29 seven times in 2009 and is now tipped to return to F1 next season.

"It is always fantastic to get back in an F1 car," Grosjean said. "The aim of the drive was to get me used to drive an F1 car again. We did some qualifying running in the morning and some long running in the afternoon. We also did some pit stop practices. It was very good for the fitness; I was very pleased and I did enjoy working with the team a lot."

Grosjean admitted that despite having raced the car before, he felt different driving it thanks to what he had learnt over the past two years.

"It felt different compared to 2009 because I am more experienced now. I enjoyed the car from the moment I jumped in and I enjoyed working with the engineers. We had a good time in Valencia and everybody enjoyed it."

Pirelli's F1 boss Paul Hembery revealed a month ago that ultra-fast and sticky qualifying tires were among the official supplier's ideas about how to maximize its involvement beyond this season.

"In the end for something like that the decision is with the teams. They might say no," he said in August.

Asked by a Twitter follower on Thursday if the proposal was given the green light, Hembery said: "Not for 2012."

'Rogue trader' costs major F1 sponsor billions
(GMM) A major formula one sponsor has had a $2 billion hole blown into its books by a so-called rogue trader.

The Financial Times reports that a 31-year-old has been arrested in London as the Swiss group UBS, a 'global partner' of grand prix racing, saw its shares plunge almost 11 per cent.

On the alleged investment fraud, a spokesperson for Swiss banking regulator Finma said: "From the scale of this case, you can be sure that it's the biggest we've ever seen for a Swiss bank."

Reports suggest the scandal could single-handedly wipe out UBS's forecasted profits for the quarter.

Ferrari comeback rumors 'nonsense' – Briatore
(GMM) Flavio Briatore has rubbished speculation he is eyeing a return to formula one management.

Recent rumors have linked the flamboyant former Renault boss, banned from F1 because of the 2009 'crashgate' scandal, with a leading role at Ferrari.

But the Italian told Germany's Auto Bild Motorsport: "I do not intend to return to formula one as a team manager.

"Italy is the land of rumors," said the 61-year-old millionaire. "That's why I am always brought back in connection with Ferrari, but it's nonsense."

In the same interview, Briatore rubbished suggestions Sebastian Vettel might be an ideal next teammate at the Maranello based team for Fernando Alonso.

"I would never want them together," insisted Briatore, who is still involved in the management of Spaniard Alonso's career. "It would weaken the team by splitting it into two parts."

Briatore admitted that he has been impressed with German Vettel, 24, in 2011.

"He is super strong with the right attitude and reminds me of Michael Schumacher and Fernando Alonso in that once they had their first title in the bag they then got stronger and more confident."

On the topic of Schumacher, Briatore continued: "I'd rather reminisce about the Michael of Benetton and Ferrari. Now, he has been out for too long and is fighting to be among the top ten.

"That's something I find quite sad," he added.

FOTA Recruiting advisors
The Formula One Teams Association (FOTA) has hired advisors to help take a more influencing stake into the way Formula 1 is run. DV Advisory Partners was recruited last week as the sport prepares for negotiating the latest version of the Concorde Agreement – the binding document for teams, governing body the FIA and commercial rights holders Formula One Management (FOM).

“At the end of the day, Formula 1 is owned by venture capitalists and one would suspect that they can't hold the sport in their funds ad infinitum," Whitmarsh is quoted as saying by The Independent.

F1 has been owned by private equity firm CVC Capital Partners since 2006. Founded in 1981, CVC is currently in the top five of the world’s largest private equity firms, with total assets equating to approximately $46 billion (Â£29 billion).

The existing Concorde Agreement will terminate in 2013.

Heidfeld confident of 2012 drive
Nick Heidfeld says he is "more than hopeful" of finding a race-seat on the Formula One grid for next year's Championship.

Heidfeld, having failed to secure a race-seat for this season, was handed a lifeline by Lotus Renault GP when the team called him up to replace the injured Robert Kubica.

The team, though, were soon disillusioned with the German, who scored 34 points, saying he did not have the leadership qualities that they were seeking.

Renault opted to replace Heidfeld ahead of the Belgian GP, once again leaving the 34-year-old without a place in F1.

However, he is determined to return next season, confident he can secure a race-seat with the help of some financial backing.

"I am more than hopeful I can secure a seat," he told Autosport. "Next year's cockpits are limited but we are working on it.

"We already have sponsors interested in joining. But if this becomes the main reason to get a drive, then I can most likely not compete with a huge multi-million dollar backing."