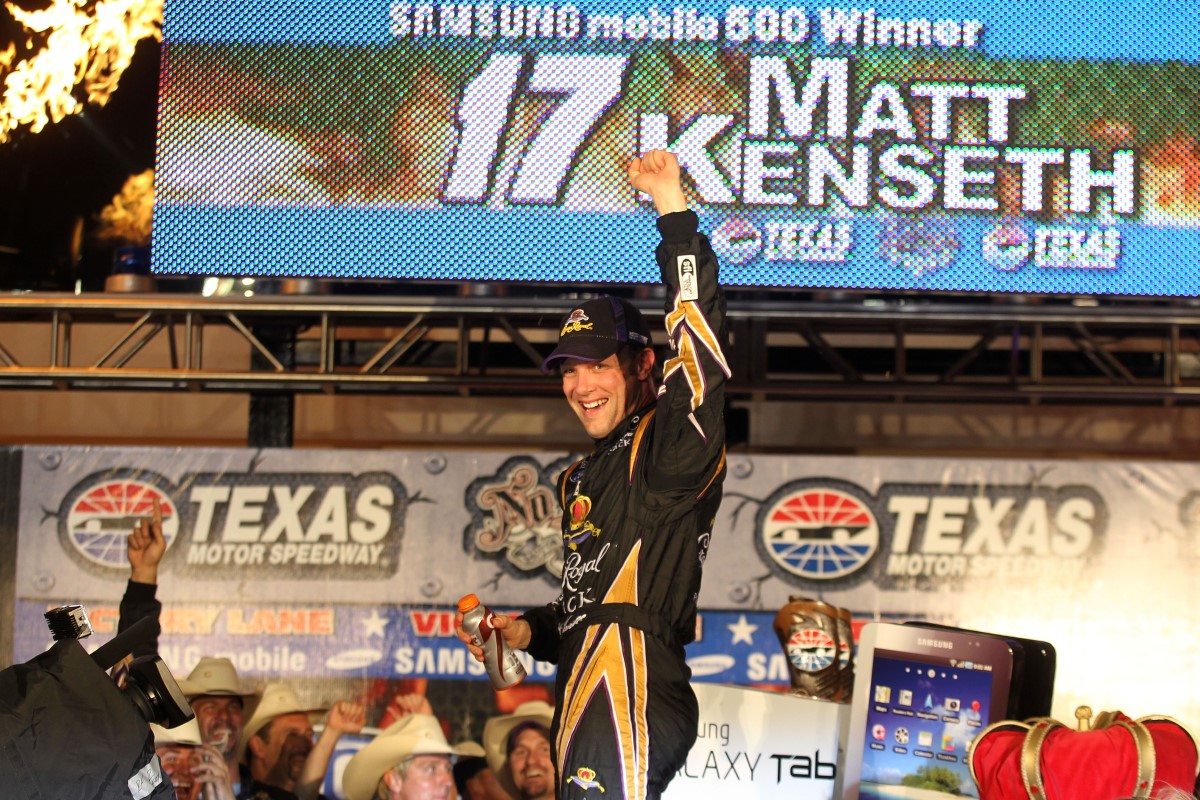 The NASCAR Sprint Cup Series will be racing under the lights this Saturday night at the Texas Motor Speedway during the running of the Samsung Mobile 500. At the end of the evening the winning driver gets to stand in the speedway's victory lane wearing a genuine cowboy hat while firing the traditional six shooters in the air.

During any given racing season, a race at the Texas Motor Speedway often involves Texas sized numbers. Of all of the possibilities connected to this race, there seems to be two numbers that really stands out. The first one is the number nine. Roush Fenway Racing has a series high eight wins at the Texas Motor Speedway and will be unleashing their three car stable to collect win number nine. That's very possible, all three of the Roush Fenway drivers are former Texas winners.

The other significant number, connected to Saturday night's race, is 200. Hendrick Motorsports scored their 199th win last fall at the Kansas Speedway. To commemorate his company's latest racing milestone, team owner Rick Hendrick ordered some special "200th win" racing hats. He's been carrying that bag of hats to one race track after the other, since last fall, waiting for the opportunity to pass them out. Hendrick will be unleashing his four car stable to collect win 200. That's also very possible, all four of the Hendrick drivers are also former Texas winners.

In order to determine who might be the lucky drivers to fire those six shooters in the Texas victory lane, we turn to the professional numbers crunchers, Texas sized and otherwise, from the Las Vegas based World Sports Exchange, (WSE).

Topping the WSE's Texas ranking is two heavy hitters: Jimmie Johnson and Tony Stewart are rated at 7 to 1 odds. Johnson, ranked tenth in the points standings, has some impressive numbers at Texas that includes a previous win, seven top five finishes, 12 top ten finishes and a healthy 10.2 average finish ratio, (AFR). At 7 to 1, "Mr. Golden Horseshoe" is a very strong bet to hand Rick Hendrick his 200th win.

Where there's "Smoke" there's fire. Ranked third in the standings, and only 12 points from the top, the red hot Tony Stewart also has some impressive Texas sized numbers. He's a two time winner including the previous race held there this past November. He's also has five top fives, 11 top tens and a 12.6 AFR. Like Johnson, he's also a rock solid wager at 7 to 1.

In the WSE's 8 to 1 category, you will find Roush Fenway drivers Carl Edwards and Matt Kenseth along with Joe Gibbs Racing driver Kyle Busch. All three of these drivers are considered solid wager considerations.

When it comes to Texas numbers, Edwards leads the Roush brigade with three wins. By the way, two of Edwards' wins at this track came when he swept both events in 2008. He's also managed to accumulate five top fives, six top tens and a 15.5 AFR. Edwards seems to be off to somewhat of a uncharacteristic sluggish start this season. He's 11th in the standings and 47 points away from first. However, with the Roush performance numbers at this race track, Edwards could very well be shooting those guns in the Texas victory lane.

Roush Fenway's Matt Kenseth is the defending race champion and has outstanding Texas sized numbers. That includes two wins, 10 top fives, 13 top tens and an excellent AFR of 8.7. He's off to a great season start and is ranked fourth in the standings only 12 points out of first. Of all of wager considerations presented by the WSE for the Texas race, Kenseth is by far the best.

Kyle Busch is still seeking his first Texas win and has a 16.2 AFR. He's off to a sluggish start and is ranked 16th in the points and 75 away from first. The line of thinking here, that places this driver at 8 to 1, is the fact that he is the hard charging Kyle Busch and he often turns in good performances on 1.5 mile intermediate tracks.

At 10 to 1 is the tandem of Greg Biffle and Jeff Gordon. Biffle continues to lead the points and has some decent numbers at Texas. He's a former winner there with six top fives, nine top tens and a 17.2 AFR. He's also part of that Texas strong Roush Fenway Racing brigade and that alone makes him a solid wager for this race.

Four time Sprint Cup champion Jeff Gordon is another Hendrick Motorsports driver who wants to present his boss with that coveted 200th win. He's a former winner at Texas with seven top fives, and ten top tens along with a 16.8 AFR. But it's more prudent that he concentrate on adding some strength to his points status right now. This team has endured some disappointing races in 2012 that has placed them 21st in the standings and 90 points away.

Turning now to the WSE's middle tier, you will find the quartet of Denny Hamlin, Kasey Kahne, Kevin Harvick and Brad Keselowski. Denny Hamlin really stands out in this group because his Texas numbers are very strong. He has two wins at Texas after he swept both races there during the 2010 season. He's the only Toyota driver to give his manufacturer a win at this track. Hamlin also has five top five finishes, eight top tens and a strong 10.2 AFR. His 2012 season is off to a good start as well. He's currently seventh in the standings and only 16 points away. Hamlin is an excellent long shot wager to win this race.

Just mention the name Kasey Kahne right now and everyone shakes their heads in disbelief. The fourth driver from Hendrick Motorsports has been hampered with frequent bouts of bad racing luck all season long and is now 31st in the standings and a whopping 133 points out of first. He has a previous win at Texas, back in 2006, and has the distinction of being the only driver to win at Texas from the pole position. He also has four top five and top ten finishes, but the AFR is a high 19.6. Despite everything he's been through so far this season, Kahne is still a long shot worth considering. The law of averages says this run of bad luck has got to end sooner or later.

In a still early season, Kevin Harvick is a contender in the Chase for the Championship. He's fifth in the standings only 12 points away. He's still seeking his first Texas win but has compiled three top fives, eight top tens and has a 12.9 AFR.

When you look at Brad Keselowski's Texas numbers, you might wonder why he's on this listing at all. When it comes to Texas wins, top fives and top tens, he has goose eggs in all three categories and a very high 23.7 AFR. So, why is this driver rated at 12 to 1 for the Texas race? If that Penske Dodge is on the mark, he could just surprise us all at the end of the race. He's done it before.

For many NASCAR Sprint Cup Series observers, it's a little surprising that Dale Earnhardt Jr is leading the Hendrick Motorsports campaign. The pride of the "Junior Nation" is second in the points and only six markers from the top. He has some good numbers at Texas including his first ever Sprint Cup win back in 2000. He also has compiled three top fives, ten top tens and a healthy 14.1 AFR. We all know what the down side is here: he hasn't won a Sprint Cup race since the summer of 2008. But the continued improvement in his relationship with crew chief Steve Letarte, this team is definitely headed in the right direction. There are many who believe that Saturday night in Texas may turn out to be the race when he finally snaps that winless streak. Even track President Eddie Gossage thinks so. At 15 to 1, Junior might actually be a very strong long shot consideration.

Looking now at the WSE's lower tier, Clint Bowyer is ranked at 25 to 1 while Martinsville winner Ryan Newman is ranked at 30 to 1. At 40 to 1 you will find Michael Waltrip Racing team mates Martin Truex Jr and Mark Martin who led Thursday's practice session with a hot lap of 189.427 MPH. Martin is also a previous Texas winner with a healthy 13.7 AFR. All three of the MWR teams: Bowyer-Truex-Martin, have been showing some strength so far this year.

Closing out the WSE Texas rankings are drivers A J Allmendinger, Jeff Burton, Joey Logano and Juan Pablo Montoya at 50 to 1 odds. From this group, the stand out is Burton who is a two time Texas winner. He won his first ever career Cup race back in 1997 and won again in 2007 after only leading one lap.

If you don't see your favorite driver's name on the listing, it means they are ranked by the WSE under "all others" and listed at 10 to 1 odds.

Now for the disclaimer: NASCAR wants us to remind you that these numbers should be viewed for informational and entertainment purposes only. They neither encourage or condone the placing of wagers on their races.

Now that I've shared that important message with you, I'm going to tell you that I'm picking Matt Kenseth to win the Samsung Mobile 500. With his rock solid Texas numbers, combined with the performance levels of Roush Fenway Racing at this track as well as the power of those Roush Yates Ford engines, Matt Kenseth at 8 to 1 is worth the financial risk. Tempting, isn't it?

The race has 46 entries vying for 43 starting positions. Eleven of those entries are on the go or go home list meaning they are not guaranteed a starting berth in the race because they are currently outside of the top 35 in NASCAR's owner's points. These teams will have to rely on qualifying speeds to earn a berth in the race.

The speedway has 138,122 permanent seats in its grandstands but the total fan capacity, including the infield, is 191,122.

The speedway opened in 1997 and held its first race in April of that year. Since that time the Texas Motor Speedway has hosted 22 NASCAR Sprint Cup Series races that has sent 16 different winners to victory lane.

Weather will bear some scrutiny this weekend because there is a 20 percent chance of severe thunderstorms in the Dallas-Fort Worth area on Saturday. Otherwise conditions are expected to be cloudy with daytime highs of 84 degrees. Hopefully Saturday rain will not force the race to be held on Sunday. The forecast for Sunday calls for a 60 percent chance of rain.

The Samsung Mobile 500 will be broadcast live by Fox Sports beginning at 7 pm eastern time. The race re air will be on Wednesday, April 18th, at 12 pm et on SPEED.