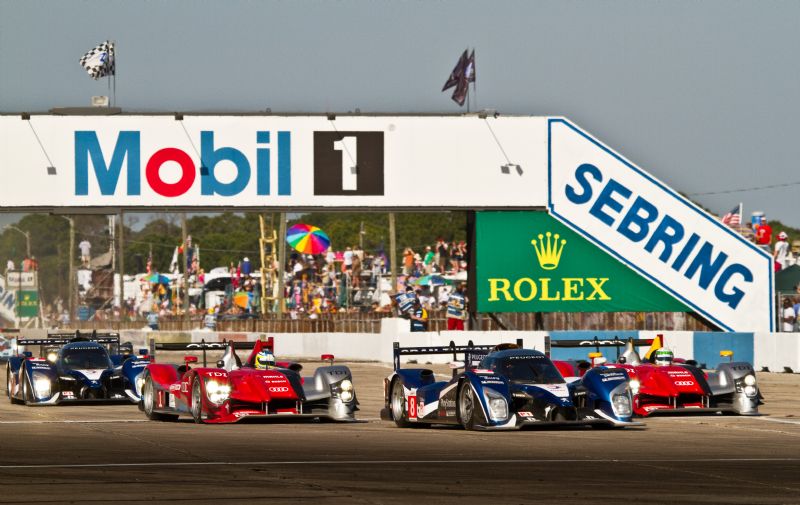 “The enthusiasm for this year’s race is at a fever pitch." The new FIA World Championship evolved from the Intercontinental Le Mans Cup, which debuted at Sebring last year. With this large and strong field it is going to be one of the best in the illustrious history of this endurance race.

For six decades, Sebring has been one of the favorite races on the international sports car racing calendar. “We all love to come here, the place is fantastic and the fans really love racing," said five-time Sebring winner Tom Kristensen. The Dane, also a Rolex Testimonee, is once again a favorite to win this race. Together with Scotsman Allan McNish and Italian Rinaldo Capello, the eight-time 24 Heures du Mans winner will drive the #2 Audi R18.

“I came here in 1999 for the first time and was successful on my first attempt. So I love this raceway," Kristensen stated. While Audi is one of the favorites in the LMP1 class, the top class for prototypes, they still have to compete with the Lola’s, Pescarolo’s and HPD before making it into the winner’s circle here. Among the new teams is JRM with a HRD-Honda.

Le Mans veteran Peter Dumbreck is one of the JRM drivers; “Sebring is new to me and I am excited to be here, especially on this anniversary," said the Scottish driver. Since the 12 Hours of Sebring is also the opening round of the American Le Mans Series, a large number of American teams will race side-by-side with WEC competitors. These cars race under the same regulations and their P1 prototypes will also battle for the overall win of the 12 Hours of Sebring race.

With 13 total entries, the LMP2 class (WEC and ALMS combined) will be highly competitive. Among the drivers in this class are former Formula One racer Stefan Johansson (SWE) – the overall winner here in 1984 –, Indy 500 star Ryan Hunter-Reay (USA) and former Rolex 24 At Daytona winner Joao Barbosa (PRT).

The largest group of entries can be found in the GT classes. For the 12 Hours of Sebring race, these production-based cars run in three categories: GTPro, GTAm and GTC. All major sports car manufacturers have entered several cars for this weekend’s race: BMW, Corvette, Porsche, Ferrari and Aston Martin. BMW is the defending GT class champion and the Bavarian manufacturer is back with Uwe Alzen (DEU), JÃ¶rg MÃ¼ller (DEU) and Jonathan Summerton (USA) as new team members.

Corvette, who will also celebrate its 60th birthday this year, has two factory entries supported by the French Larbre Competition cars. Porsche, who has the most wins in Sebring – 18 overall and 67 in class – will debut their new 911 GT3 RSR (997) racer.

In the GTC class, last year’s winner Sebastiaan Bleekemolen (NLD) is back to defend his title: “It is always great to be in Sebring, it is a wonderful event and after winning here last year, it is definitely now one of my favorites." As Bleekemolen will go for another class win, his brother Jeroen will fight for the overall win in a LMP1 Lola-Toyota.

With a strong field of over 60 cars, the 60th edition of the 12 Hours of Sebring will be highly competitive. In its long history there have been many surprising winners, so nothing has yet been decided. The race begins this coming Saturday, 17 March at 10:30 local time, and 12 hours later another name will join the list of champions that already includes celebrity drivers such as Stirling Moss (GBR), Mike Hawthorn (GBR), Juan Manuel Fangio (ARG), A.J. Foyt (USA), Phil Hill (USA), Mario Andretti (USA) and many others.