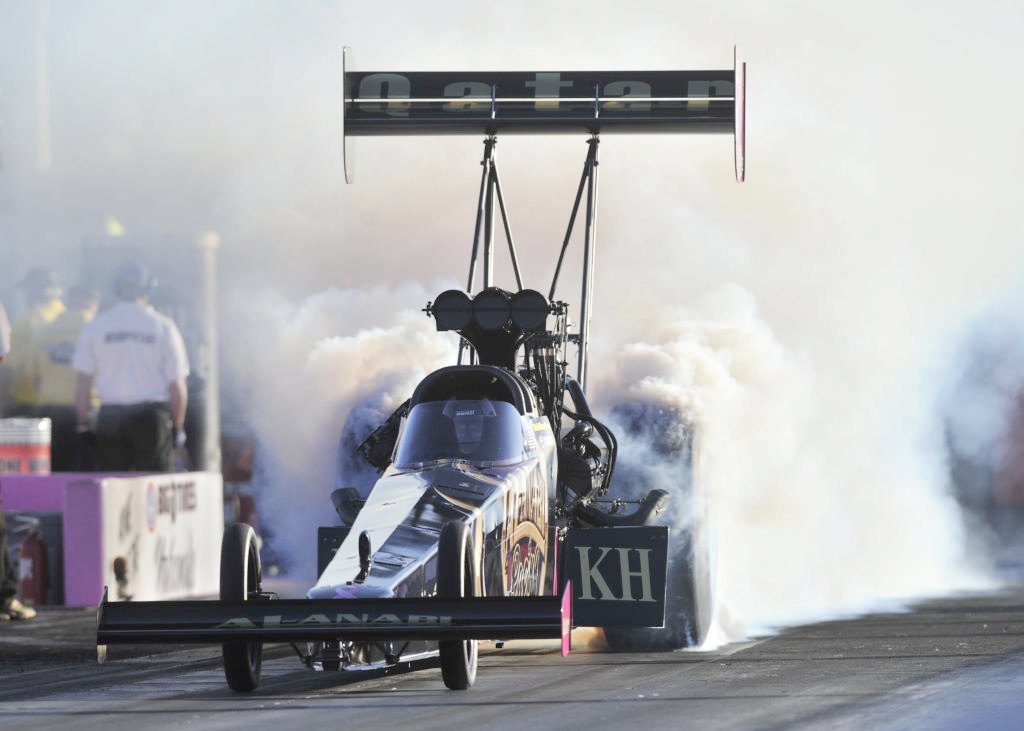 Del Worsham raced to the No. 1 qualifying position Saturday at the Big O Tires NHRA Nationals at The Strip at Las Vegas Motor Speedway.

Ron Capps, Mike Edwards and Hector Arana Jr. were also No. 1 qualifiers in their respective categories at the penultimate race of the 2011 NHRA Full Throttle Drag Racing season.

Worsham powered his Al-Anabi dragster to the top of the field in the last qualifying session with a run of 3.796-seconds at 322.88 mph. It is his sixth No. 1 qualifier of the season and 11th of his career. Worsham, who entered the event fourth in the point standings, also picked up an additional nine bonus points during the four qualifying sessions.

“It feels amazing," said Worsham. “Last night we were on a great run. I thought it could have possibly been a 3.77 or a .78. So when it cooled down today and Alan (Johnson, team manager) walked into the trailer and said, ‘How about if we just run a 3.80 and take the top spot’, and I said it sounded good to me if we could do it. But he lied and we went a 3.79."

Top Fuel points leader Antron Brown qualified fifth in the field and will face seven-time world champion and fellow Don Schumacher Racing teammate Tony Schumacher in the first round of eliminations. Worsham’s teammate and second-place driver in the standings Larry Dixon qualified in the sixth spot.

In Funny Car, Ron Capps took the top spot in the category on the final qualifying session of the event. Capps powered his NAPA Dodge Charger to a 4.080 at 315.49 to take his first No. 1 qualifier of the year, first at Las Vegas and 11th of his career.

“We ran all day Monday here after Phoenix, and it wasn’t fun for more than one reason, but it’s part of what these NAPA guys do," said Capps. “That could have happened at any point of the season, but it’s like, ‘It has to happen now while we’re in the Countdown?’ I always pat my guys on the butt and try to play cheerleader and keep them motivated. For them to do what they did and be No. 1 qualifiers, that was the spark that they needed."

Capps’ teammate Jack Beckman, who sits in second place in the championship point standings, qualified eighth for the event and will face defending world champion John Force in the first round of eliminations. Fellow Don Schumacher Racing driver and point leader Matt Hagan qualified fifth for the event while third-place driver in the standings Mike Neff qualified second.

In Pro Stock, 2009 world champion Mike Edwards took the top spot in the category. Edwards drove his Penhall/Interstate Batteries Pontiac GXP to a 6.594 at 208.81 to get hi

s fifth No. 1 qualifier of the season, 39th of his career and fourth at The Strip at Las Vegas Motor Speedway.
“It always feels good to make a good run, and we just happened to hit it at the right time," said Edwards. “The conditions were definitely the best all weekend this morning. This is the fastest corrected run we’ve ever made. I’m pretty happy about that. Hat’s off to all my guys who did an awesome job today."

In Pro Stock Motorcycle Arana Jr. took the No. 1 qualifier on the final pass of the day. Arana Jr. rode his Lucas Oil Buell to a 6.879 at 194.46 en route to his seventh No. 1 qualifier of the season and fourth straight in the Countdown to the Championship.

“It feels good to know that I am riding a consistent Lucas Oil Buell," said Arana Jr. “This bike is amazing. It’s proved it numerous times that it goes right down the track and repeats itself, so it’s not just a one-hit wonder. It’s a really good feeling. I like being the predator. I feel that Eddie (Krawiec, points leader) probably feels like the prey right now. Right now I feel like a lion, getting ready to take that championship."