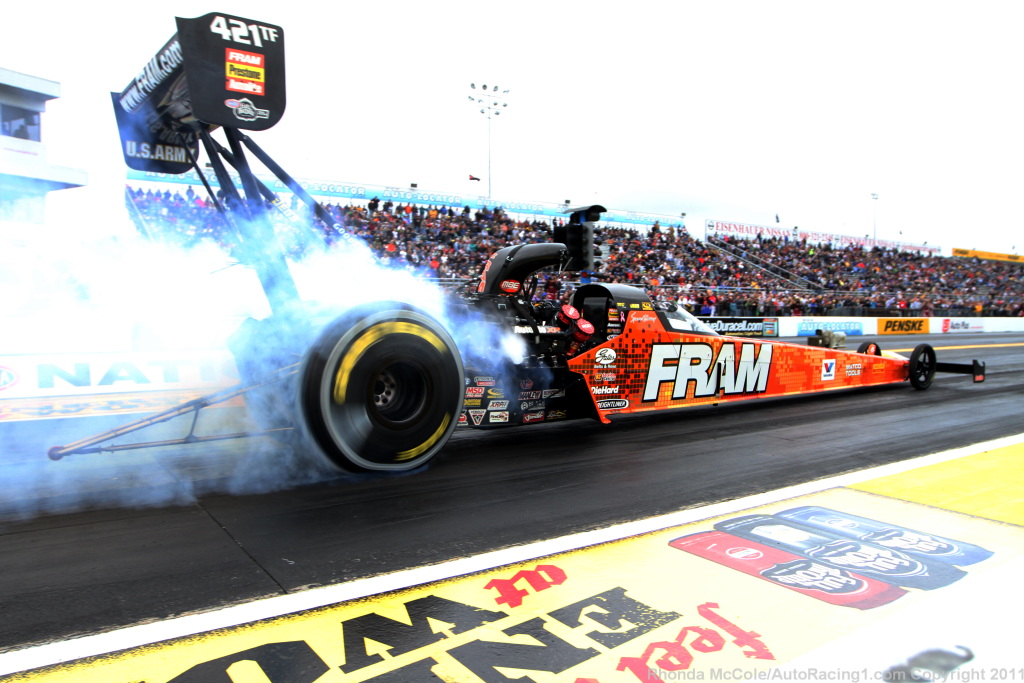 Racing resumed Monday morning under cloudy skies after rain washed out Sunday’s action following the first two rounds of eliminations that gave way to two new national records and broken track records in all four of the top classes.

Top Fuel saw the national ET record broken, broken again, and for good measure, broken yet a third time in the final round as Del Worsham ran an astonishing 3.735 at 323.81 in a losing effort against Massey, who took the win on a holeshot with a 3.770 at 323.12 mph in a classic duel between Al-Anabi and Don Schumacher Racing.

Antron Brown – running out of the DSR stable, set the new national mark in Saturday’s qualifying, running a 3.766 to top the previous mark of 3.770 set by Al-Anabi’s Larry Dixon at the season-opening event at Pomona.

Al-Anabi roared right back in the opening round of eliminations on Sunday with Worsham running a 3.760 at 322.96 to beat Shawn Langdon. Worsham then went on to beat Clay Millican and David Grubnic to face Massey, who topped Dom Lagana, Tony Schumacher and Larry Dixon to advance to the money round.

In the final, Massey hit the gas with a .056 light over Massey’s .101, which was enough to put Massey out front, running a 3.770 at 323.12 to collect his fourth win of the season and 12th of his career. He now leads Brown by 65 points in the championship standings.

“I just try to be consistent on the Tree no matter who I'm racing," said Massey. “(Crew chiefs) Phil (Shuler) and Todd (Okuhara) do an awesome job tuning, and we get a lot of confidence from each other. We started off going for the record in qualifying, but at one point we said, 'You know, let's just try to win rounds.' The car was on a string. You could have put '3.77' on the wing.

“Alan Johnson and Del Worsham did an amazing job in the other lane to make their car run as fast as it did It makes it that much sweeter of a win, in a way, for the win light to come on in our lane with a 3.77."

In Pro Stock, points leader Jason Line went wire to wire for the second straight week and set a new national ET record, collecting 20 bonus points for his efforts in a win against teammate Ronnie Humphrey.

Line already had the no. 1 qualifier and the track ET record sewn up with a 6.513 in Saturday’s qualifying. He then backed it up 6.483 in a win over Bob Benza in the opening round to set the national record.

Not content with that, Line went out a beat his own record with a 6.477 over Erica Enders in the second round. He then eliminated his other teammate Greg Anderson to earn a first-time final round meeting against Humphrey.

“That's the second time we qualified No. 1, set the record, and won the race," Line said. “It feels really good to do that, because there is a very small club of guys who've done it. I like going into the last three races with the amount of points we have because it's not as much pressure. It's not over by any means but I wouldn't trade my position for anyone else's."

“My guys have done a phenomenal job. I don't know what's going on, but this car can make a bad run and still go fast. The car is bad to the bone. I didn't mess it up too much, and it feels awful good right now."

Robert Hight picked up his first win since Bristol back in June with an easy victory over no. 1 qualifier Johnny Gray to keep his championship hopes alive.

Taking out Ron Capps, Matt Hagan and Jeff Arend to face Gray for the second time this season in the finals, Hight ran 4.065 302.62 to go a perfect 5-0 in final round this season after Gray went up in smoke right out of the starting gate.

Hight now holds fourth in the standings, 52 points behind Hagan.

“We know that this was our last-chance race," said Hight. "If we lose early again here, it's over. You put yourself in such a hole when you lose first round in the first few races in the Countdown. It was also in our mind that we didn't win a single round in the Countdown last year. You've got to get that off your back."

“Right now, we have a lot of momentum," said Arana, Jr., who is now 35 points behind leader Eddie Krawiec. “My runs have been improving and we plan to keep this streak going. This should help me for the rookie of the year and give me a good chance for the championship. I finally got to qualify No. 1 and win the race. That’s something I’ve been trying to do all year long."