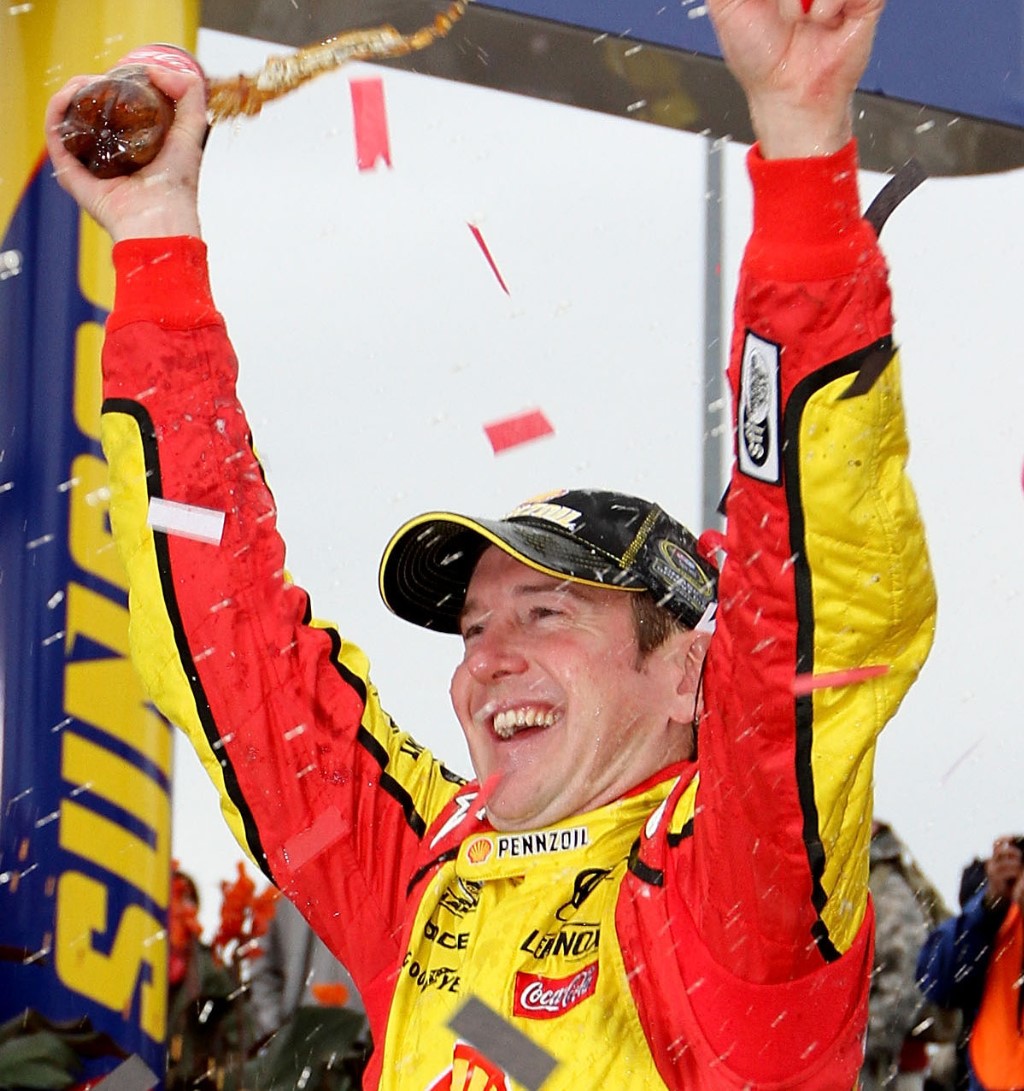 Roger Penske's team had a bad day at the Kentucky IndyCar race on Sunday but they won the Dover NASCAR Sprint Cup race with Kurt Busch bringing the No. 22 Dodge home first leading 87 laps.

While Busch celebrated his second victory of the season and the 24th of his career in victory lane at the Monster Mile, runner-up Johnson and third-place Edwards sat in the nearby media center castigating themselves in the post race news conference.

Johnson stumbled on the last two restarts of the race, allowing Busch to take and retain a lead he held for the final 42 laps. Edwards trashed his own winning chances by speeding on pit road in a timed section he and crew chief Bob Osborne had discussed specifically before the race.

In a sense, though, all three drivers were winners. Busch, Johnson and Edwards took advantage of the struggles of Tony Stewart, who led the series after wins in the first two races of the Chase for the NASCAR Sprint Cup.

Fighting the handling of his No. 14 Chevrolet throughout the afternoon, Stewart lost his advantage in the standings by finishing 25th, two laps down. That left Edwards and 10th-place finisher Kevin Harvick tied for the series lead, with Stewart and Busch each nine points back and Johnson alone in fifth, 13 points behind Harvick and Edwards.

Busch and Johnson, who had tangled at Pocono and Richmond during NASCAR’s 26-race regular season, raced each other cleanly Sunday with Chase points on the line.

For Busch, the victory was redemption after a frustrating 22nd-place finish a week earlier at New Hampshire.

“It was just perfect execution today, with pit stops and with making the car better during the race," Busch said. “I couldn’t be happier right now. To win a Sprint Cup race in the Chase, this is what it’s all about. This is the playoffs.

Johnson passed Harvick for the lead on Lap 195 and began to assert his dominance. With crew chief Chad Knaus adjusting the No. 48 Chevrolet to rapidly changing track conditions, Johnson was the class of the field.

It helped Johnson’s cause that his primary opposition had issues on pit road. Edwards, who led 116 laps before Johnson took over, received his first speeding penalty in the Cup series this season after a green-flag stop on Lap 245.

Edwards spun his tires after shifting from first to second gear and, thinking he needed to go faster, sped up as he exited pit road—too much according to NASCAR timing and scoring. It wasn’t until Lap 300, when J.J. Yeley’s Ford smacked the wall to bring out the eighth caution, that Edwards’ No. 99 Ford got a free pass back to the lead lap as the highest-scored lapped car.

“It was a great day, other than that feeling I had when I ruined it there on pit road," Edwards said. “That’s about as small as you can feel in a racecar. We talked about it before the race. We looked at the pit-road speeding lines and that last line. … Bob and I actually discussed the last section. It’s 25 feet, 8 inches long, and we talked about that run and how I was not going to speed through it, and I just blasted right through it.

“We were very, very fortunate. As frustrated as I am with myself for messing that up, I’m really, really grateful for the gift that was given to us with that caution and the ability to come back up there. And the other thing that was really important to me was my guys sticking behind me, because they had every right to be really, really upset with me. So it ended up being a good finish."

Johnson led from the restart on Lap 306 until Mike Bliss spun off Turn 2 to cause the ninth caution, but Busch grabbed the top spot moments after a restart on Lap 359 and kept Johnson at bay until Greg Biffle’s collision with the frontstretch wall on Lap 361 brought out caution No. 10.

On Lap 366, Busch once more got away from Johnson on the restart and maintained a margin of five car lengths as Edwards surged past Kahne into third place on Lap 370.

“I did a really good job, up until those last two (restarts)," Johnson said. “I have to say, when you’re the leader, you have a small advantage, because you go when you want. I blew it by spinning the tires. Kurt got a good launch, and we were door to door going into (Turn) 1, and he was able to get by on the outside.

“And then the next one, I was going to try to do that same thing back to him, and I was just trying to time it when he was going to accelerate. And I didn’t time it right. And I had too big of a gap, and fell in behind him going into Turn 1.

“I put it on me, because the starts I had earlier in the day, regardless of the lane, leading or not—I cleared them typically going into 1 so, it’s on me."

There are still 7 races to go in the Chase and next up is Kansas. and Jimmie Johnson is coming on strong. Can he win the title yet again? Today wasn't a fuel mileage run and backmarkers like Dale Earnhardt Jr. finished back where he belongs and did not cloud the results – the drivers who are the real drivers in this series finished up front.