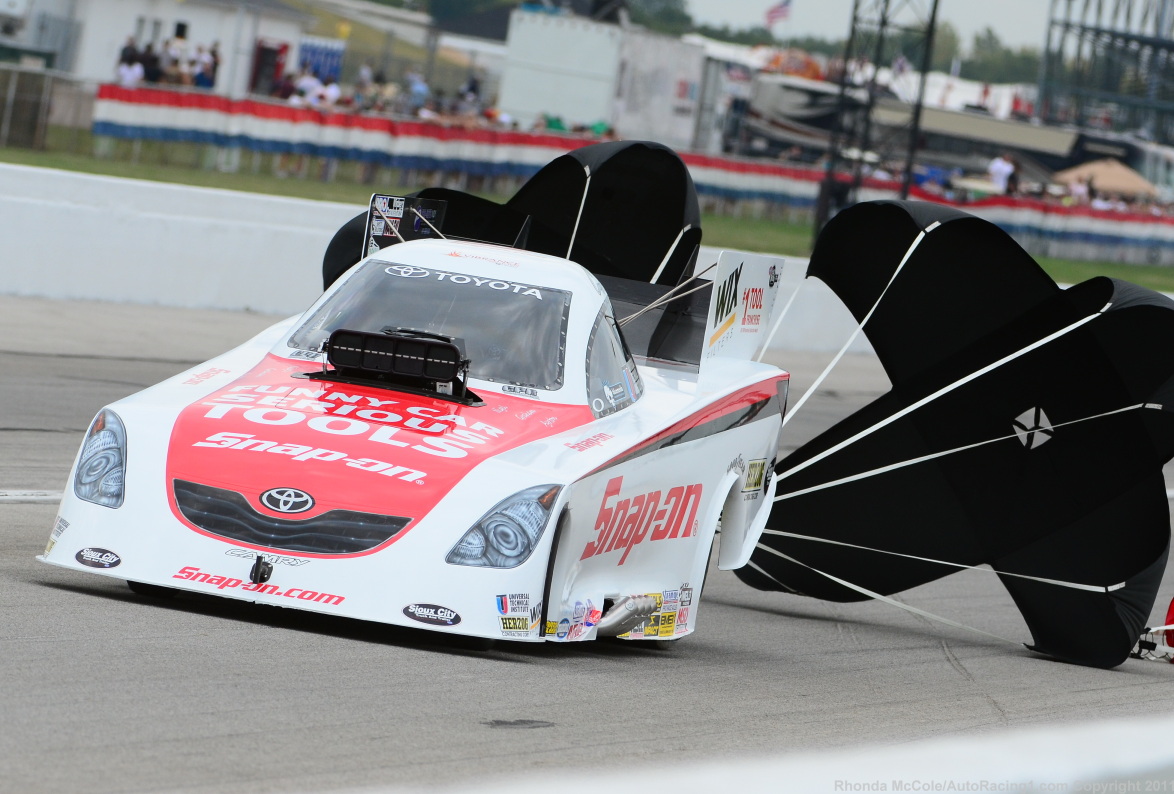 Cruz Pedregon roared back to the top of the Funny Car qualifiers with a record-breaking run in Sunday’s final qualifying session to earn his 43rd-career NHRA Full Throttle Drag Series No. 1 qualifier spot as qualifying wrapped up for Monday's 57th annual Mac Tools U.S. Nationals at Lucas Oil Raceway near Indianapolis, Ind.

Overcast skies and an occasional sprinkle of rain led to much cooler track conditions and much higher speeds, as crew chiefs scrambled to take advantage of the conditions and gain valuable bonus points in the final event before the Countdown to the Championship begins.

Pedregon rallied in the final round to re-claim the top spot from Melanie Troxel with a jaw-dropping 4.026 at 314.24, breaking the track record set last year by Matt Hagan and tying the tenth-quickest pass in Funny Car history, a record he himself set at Richmond in 2008.

Pedregon had held the no. 1 spot through Saturday sessions before Troxel knocked him from the pole with a 4.068, 313.73 in Sunday’s opening round.

Troxel, who already claimed the top qualifying spot in Pro Mod, faced off against Pedregon as the final pair in Sunday’s second session with Troxel going up in smoke right off the line as Pedregon streaked by on a record-setting pass.

“We got it all on that one," said Pedregon. “The car ran our career best speed at halftrack. I’ve got to always credit the track because you can’t do that when the track isn’t there, but the track and weather were there for this run."

The news was not as good for Cruz’ brother Tony who was trying to race his way into the Countdown field, but failed to qualify for the event.

Countdown contender Shawn Langdon bumped his way into the field and will face Brown to start eliminations. Clay Millican, Cory McClenathan and Pat Dakin were among those who missed the show.

Jason Line locked up his second straight pole with his best run of the weekend in the final run of qualifying in the Pro Stock class, putting up a 6.603 at 209.01 mph to beat out Greg Anderson for his 21st-career top qualifier spot.

Line had trailed Anderson all weekend until the two squared off as the last pair in Sunday’s final session.

After watching Mike Edwards streak to the provisional pole with a run of 6.613 at 208.04, Anderson was determined to re-gain the top spot and nearly pulled it off with a pass of 6.610 at 208.26, but at the line it was his teammate taking the honors for the second week in a row.

“To be honest, I have not done a very good job driving all weekend," said Line. “I’ve struggled here in the past and I’d really like to get it out of my head, straighten it out and actually do a good job here. I have a good car so if we don’t tomorrow then it’s all on me. That being said, we’ve got a great hot rod and we just have to go up there and get it done."

Countdown hopefuls Larry Morgan and Warren Johnson were among those who did not qualify.

Andrew Hines was flawless through both of Sunday’s sessions to win his first no. 1 qualifier of the season and 29th of his career.

After holding the provisional pole from Saturday’s sessions, Matt Smith traded the top back and forth through Sunday’s rounds, with Hines finally putting Smith away in the final run of the season 6.909 at 193.90 mph over Smith’s 6.936, 190.86.