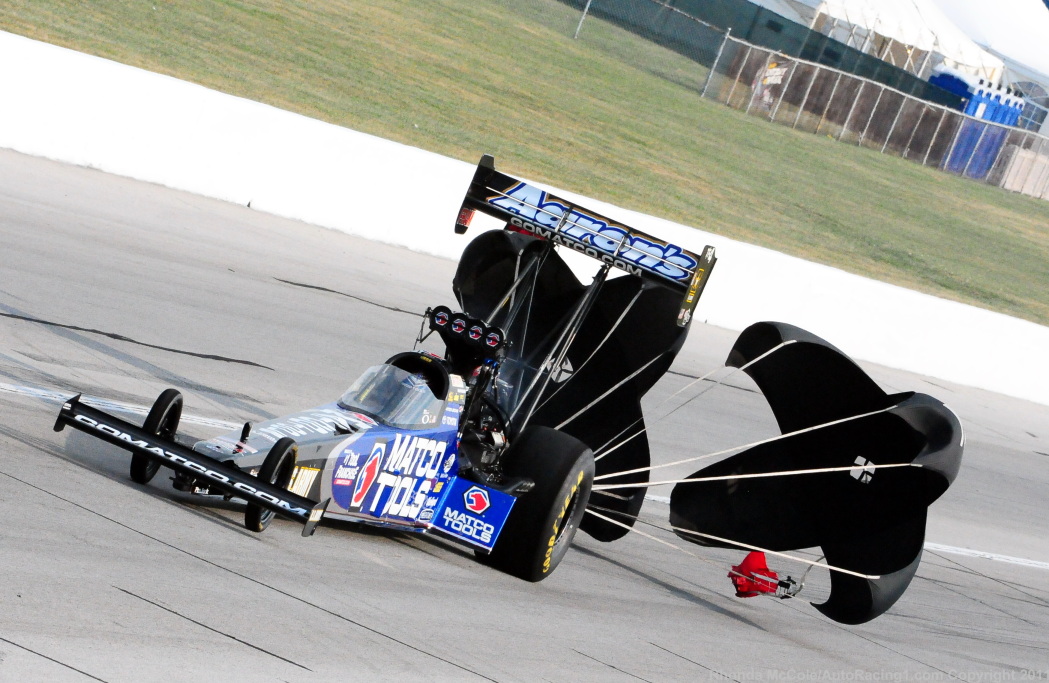 Antron Brown and his Don Schumacher Racing teammates flexed their muscles and raced their way to the top of the Top Fuel leaderboard on Saturday in the second day of qualifying for Monday's 57th annual Mac Tools U.S. Nationals at Lucas Oil Raceway near Indianapolis, Ind.

Cooler track conditions during the late-evening session led to some major shakeups in the Top Fuel and Funny Car divisions, with several of the top-five qualifying spots changing hands.

Antron Brown jumped from fifth to first in the Top Fuel ladder with a final run of 3.818 at 322.96 mph to knock Larry Dixon off the provisional pole.

“We came out here last week and tested a whole variety of things we wanted to test," said Brown. “We came up with some stuff and have just been running the same package that we have run all year and will run the rest of the season. Brian (Corradi, co-crew chief) and Mark (Oswald, co-crew chief) and the boys have just been refining it and just making it better and better."

Top Fuel points leader Del Worsham rallied back from a disqualification on Friday and an aborted run in Saturday’s opening session to take the fourth qualifying spot with a run of 3.376, 316.38 in the final session. Dixon was unable to best his run from Friday and held the fifth spot.

Among the Countdown contenders still not qualified were Doug Kalitta and Shawn Langdon.

Pedregon crushed the field to retain the top spot in Funny Car, pulling off the quickest pass of the event so far with a 4.071 at 301.54 mph as speeds increased significantly from Saturday’s afternoon session.

“The first run yesterday was a great run in the heat," said Pedregon. “The second we just were trying to take it down the track and were just too slow. But the last run tonight, I never like to use the phrase ‘going for it,’ but we take advantage of the conditions and we made a calculated guess at what the track would handle and we put it together and like we’ve done all year, the car hung on and man, it was haulin’ down there."

Countdown drivers Jeff Arend and Bob Tasca III are still on the outside looking in and will need to qualify on Sunday to make the show.

Matt Smith holds the top spot in Pro Stock Motorcycle with Friday's pass of 6.954 at 190.97 mph. Although the top three remain unchanged, Hector Arana III moved up to fourth while Michael Phillips got bumped out of the top five as LE Tonglet took over the number five spot.