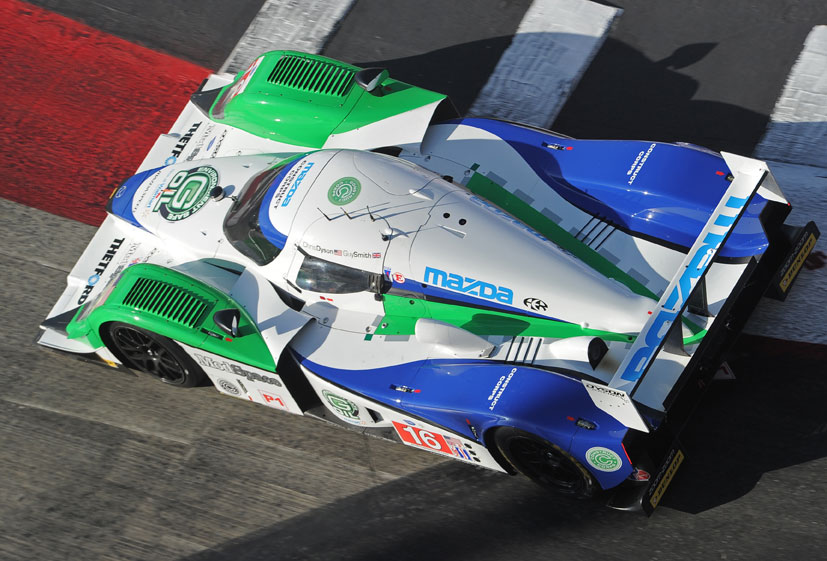 Dyson Racing’s Guy Smith captured pole position Friday for the inaugural Baltimore Grand Prix with a lap of 1:27.750 around the new 12-turn, 2.1-mile street circuit. Smith was quickest in each of Friday’s three sessions for the American Le Mans Series presented by Tequila PatrÂ¢n in his Mazda-powered Lola coupe.

The British pilot was 0.146 seconds ahead of Steven Kane in the sister Oryx Dyson Racing Lola-Mazda. Qualifying marked the end of a day that started with a delay to complete track construction but delivered a stellar qualifying session for the ALMS.

“I think the people of Baltimore have done a great job with the circuit and gave us as much track time as they could," said Smith, who will drive with Chris Dyson. “With a new circuit, there are always teething problems. But they gave us a great track. It's bumpy and it’s demanding, but that’s what street courses are all about."

Smith and Dyson entered the weekend with the lead in the LMP1 championship – a position they have held since the first race of the year at Sebring. The Dyson squad’s chief rival, Muscle Milk Aston Martin Racing, didn’t make the qualifying session due to an electrical issue that is forcing the team to repair the car’s wiring loom.

“We are sad to see Muscle Milk couldn't take part and fight with those guys," Smith said. “But I have an up and coming teammate (Kane) who is always pushing us to keep going. Getting through the traffic tomorrow will be painful. The multi-class racing is something the ALMS is all about, so hopefully the fans will enjoy that tomorrow."

Autocon Motorsports’ Chris McMurry qualified third in LMP1 at 1:32.587. He will drive the team’s Lola-AER with Tony Burgess.

Dirk Werner earned his first ALMS street course pole position with a lap of 1:31.362 (80.834 mph) for BMW Team RLL. It was Werner’s first pole since Sebring in 2009. His time in the BMW M3 GT that he will drive with Bill Auberlen was 0.588 seconds clear of Corvette Racing’s Jan Magnussen.

It’s another high point for BMW Team RLL, which holds the GT championship lead for team and manufacturers. Joey Hand and Dirk MÃ¼ller lead the drivers championship with three victories.

“It's amazing to have a pole this year," Werner said. “The car is really fantastic; it has been this whole season – especially our car. We have had a lot of close calls this year (in qualifying) but we never got that pole. The team is very competitive with drivers who can be quick. So to be here at the new track, is really great."

Like everyone else, the BMW Team RLL made many adjustments on the fly between Friday’s two practice sessions. In a class as competitive at GT, the right engineering input on the car and tires can make the difference between pole position and a fifth-place start. Werner is of the mind that the team’s Dunlops can allow the BMWs to go deeper into a race than its competitors.

“After free practice going into qualifying we looked at the data from the sessions and looked who had the best turns and speeds so we could learn a lot in a few short minutes," Werner said. “You could see how from the short time we've been on track we keep getting faster. We could actually be going faster at the end of the race than we are right now. It shows how great our team is and finding the settings for the street circuit. (The tires) are really holding up over the long drives."

Gunnar Jeannette won out in a dynamic LMP Challenge qualifying session for CORE autosport. His best lap of 1:29.407 in his ORECA FLM09 was good enough for Jeanette’s third pole position of the season and a 0.066-second gap over Intersport Racing’s Kyle Marcelli.

The gap was as small as 0.003 seconds between the two drivers.

“It obviously was very challenging today," said Jeannette, who is teaming with Ricardo Gonzalez. “This Baltimore street circuit is very rough and bumpy, but very fast in places. It's challenging. You've got to put your foot down but get it right. Hopefully you're not in a wall and you just breeze by."

Genoa Racing’s Elton Julian qualified third but only a second behind Jeannette. CORE and Genoa are locked in another tight championship battle. CORE is five points ahead in the LMPC team standings; Jeannette and Gonzalez lead CORE’s Eric Lux by seven points in the drivers title chase.

“The moment you hit the back of the pack with the GTs and the GTCs, thinking about the championship goes right out the window," Jeannette said. “It's really difficult here with the GT cars. They can be very aggressive over the curbing, but that isn't something we can do. So they can keep right up with us. It has to be the tightest field we've ever had in an ALMS race."

Jeroen Bleekemolen had an adventure he won’t forget in GT Challenge qualifying. His Porsche 911 GT3 Cup lost a wheel on the Black Swan Racing driver’s out-lap, brought it back to pitlane in the passenger’s seat and captured the class pole position on his second lap out after the tire was put back on the car.

His best lap of 1:36.794 was 0.366 seconds quicker than Alex Job Racing’s Leh Keen in the Porsche he will drive with Bill Sweedler. Andrew Davis qualified third in class for Green Hornet Racing at 1:37.917; he will team with Peter LeSaffre.

“For sure it is difficult to do a street track the first time," said Bleekemolen, who will drive with Tim Pappas – the class championship leader. “You always run into some problems, but once we got running, it went really well. After last race, after Road America, I thought the most traumatic event was passing two cars in one corner then getting a puncture. But we were fast this morning, and after the short second session. So I thought we'd have a nice uneventful qualifying."

And then it happened. After the wheel came off, Bleekemolen pulled into a runoff area, retrieved the wheel from behind the tire barriers, put it in the Porsche’s passenger’s seat and made his way back to pitlane … on three wheels. He moved into first place on his first flying lap and improved on the next lap to his eventual pole time.

“I told the guys I think we have a puncture and thought we'd be done for the day," Bleekemolen said. “The guys said, ‘No it's just loose, bring it back slowly. Then as I was going through the tires to take the shortcut it came off. We were able to get it back on without damage, and I went back out and set my fast time."

The Baltimore Grand Prix is set for 4:30 p.m. ET on Saturday, September 3. The race will air on ABC, Sunday, Sept. 4 at 4 p.m. ET (2 p.m. PT) and be shown live in the U.S. on ESPN3 or americanlemans.com outside the U.S. Live coverage also will be available on Rogers Sportsnet One in Canada and MotorsTV in Europe. Ticket and schedule information is available on the ALMS schedule page.