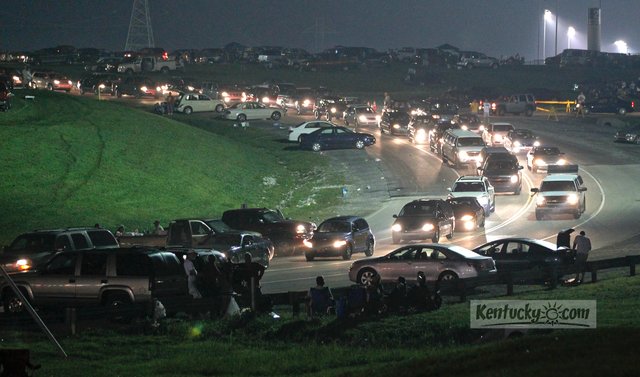 The NASCAR Sprint Cup Series July 9th debut at the Kentucky Speedway was greeted with much anticipation. 107,000 seats were sold out but weren't completely filled by fans because they were stuck in a lengthy, mega hour, traffic jam at a freeway exit trying to get to the track. Oh, by the way, there was racing that weekend at the Kentucky Speedway. Brad Keselowski had a good weekend and Kyle Busch had a great weekend. With those thoughts in mind, let's begin with:

A never before issued WHAT'S-UP to the third power goes to Kentucky Speedway officials for not being properly prepared for their Sprint Cup debut. Traffic enroute to the race track was deplorable and reported to be backed up as much as 20 miles on freeways and highways incapable of handling that many cars at one time. Many fans abandoned their vehicles on the side of the road and walked a reported one to three miles to the race track. There were also reports of fans paying home owners, adjacent to the highway, as much as $20 to park in their yards and then make the long hike to the track. A reported thousands who made it to the track, after being snarled in traffic for as long as five hours, were turned away because the inadequate parking lots were completely full.

WHAT'S-UP with not learning lessons from past events? The Kentucky Speedway is owned by Speedway Motorsports Inc, (SMI). Many years ago the SMI hosted Sprint Cup debuts at their tracks in Fort Worth-Texas and Las Vegas-Nevada. The traffic jams were equally intolerable. But the speedway and SMI officials made quick work of resolving those situations. The Quaker State 400 may have been a Cup debut at Kentucky, but it was not a NASCAR debut. NASCAR's Nationwide and Camping World Truck Series have been racing at Kentucky for approximately ten years now. During that time there has been reported traffic jams that clearly indicated the freeway to highway interchange leading to the track was a problem. Officials should have seen this coming on Friday afternoon when these highways were overloaded with fans trying to get to the Nationwide Series race.

There's an ageless proverb that applies to this situation: "if we don't learn from history, then we are doomed to repeat it." What happened to those fans trying to get to the Kentucky Speedway on Saturday was definitely a repeat offense.

In all fairness, in the aftermath, speedway officials did issue a formal apology to the impacted fans and has offered them tickets to any remaining 2011 events at SMI owned tracks. They deserve a THUMBS-UP for that gesture. However, that offers only works towards soothing the public relations problem. It doesn't address the real problems of highway access to and from the speedway as well as the need for more parking. The parking lot situation is easily resolved. The highway situation may take a lot of time and effort.

THUMBS-UP to driver Jimmie Johnson for coming up with a solution for getting to the Kentucky Speedway: rent a helicopter. On the Friday prior to the Cup race Johnson left Kentucky to return home to celebrate his daughter's birthday. When it came time to return to the race track, Johnson was advised of the expected traffic situation and chose to ride a helicopter back to Kentucky.

WHAT'S-UP with Johnson sharing all of this on "Twitter"? With so many fans stranded for hours on a highway it's safe to assume they read and sent "Tweets" just to pass the time. They couldn't have been that thrilled about how easy Johnson made it to the track while they sat still and suffered.

Then again, maybe Johnson really does have a good idea. How about let's all rent helicopters to attend the Kentucky Speedway's 2012 NASCAR Sprint Cup event. Surely by 2012 SMI will have constructed enough new parking spaces to accommodate all of those whirly birds. If by chance parking is still a problem next year, you can exercise the option of sitting in that little rescue seat and have the pilot lower you to the grandstand area. Dare to dream.

Oh by the way: in the midst of traffic jams, parking trauma and fans having to stand in line for as long as 30 minutes to use the insufficient amount of portable toilets, there was racing at the Kentucky Speedway that weekend.

Yeah, you know what's coming next. Fifty percent of you are going to read the next couple of paragraphs filled with rapture like joy. The other fifty percent will experience the biblical weeping and gnashing of teeth perhaps peppered with a few not so biblical four letter words. Brace yourself, it's Kyle Busch time.

THUMBS-UP for Kyle Busch and the excellent weekend he enjoyed while visiting the bluegrass state. The weekend started on Thursday night when he won the NASCAR Camping World Truck Series race despite having to be sent to the back of the starting field for being late for the driver's meeting. While attempting to qualify for Friday's Nationwide Series race, Busch spun out, hit the wall, had to roll out a back up car and again started at the rear of the field. He made a strong run to a third place finish in that event. During Saturday's Sprint Cup race he was the class of the field and again returned to the Kentucky Speedway's victory lane. He also took over first in the Sprint Cup championship points standings.

The accomplishments from his driving talent always seems to generate some very impressive numbers and the Kentucky Speedway weekend was no exception. In a period of 48 hours Busch drove in three races for a total of 925 miles. He ran 619 laps, around the Kentucky Speedway's 1.5 mile oval, and led 186 of them. Along the way he collected $301,816 in prize money.

But the racing weekend didn't conclude Saturday night in Kentucky. The following morning Busch flew to Slinger-Wisconsin where he won the Miller Lite Nationals 200, super late model race, at the Slinger Super Speedway.

THUMBS-UP for Brad Keselowski for winning the NASCAR Nationwide Series event at Kentucky while, once again, displaying his talent for conserving fuel. In victory lane the race winner said that his fuel conservation effort was "a seat of the pants operation" adding "I'd like to say it's a special gauge we put in the car. I call it an Ass-on-o-meter. It's my ass, that's my gauge."

THUMBS-UP to the NASCAR Camping World Truck Series for, once again, being the most entertaining race of the weekend at Kentucky. Anyone who has avidly followed this series from the beginning knows exactly what I'm talking about.

THUMBS-UP for being able to end this week's column with something very emotional and very positive. A GOD BLESS goes out to Nicole and Greg Biffle who welcomed their new baby daughter, Emma Elizabeth, to their home. The newest member of the NASCAR Nation was born last Wednesday and weighed in a seven pounds six ounces. It's the couple's first child.