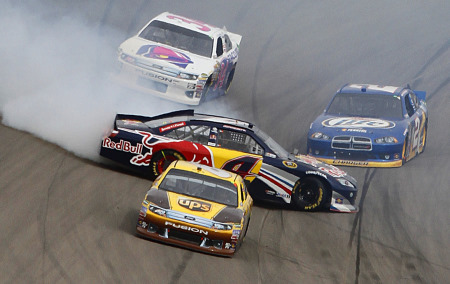 Apparently the answer is yes. According to multiple published reports, in a very short amount of time, it appears that Dietrich Mateschitz, the owner of record of the two NASCAR Sprint Cup Toyota teams as well as the internationally famous Red Bull drink, has made the decision to leave NASCAR racing at the end of the current racing season.

While no official announcement has been released, there were some reports, from "The Associated Press," that said Thomas Ueberall, Red Bull executive in charge of their international motorsports operation, was at last Sunday's race in Michigan and reportedly informed "industry executives" of the impending decision.

In the days that followed, Red Bull Racing did release an official statement that read: "Red Bull Racing is currently seeking outside investors as we evaluate next steps in the NASCAR Sprint Cup Series. We are not at liberty to comment on details while negotiations are underway. Red Bull fully supports NASCAR for the remainder of the 2011 season as we fight for victories and a position in the 2011 Chase For The Sprint Cup."

One of those potential investment teams are rumored to be led by Jay Frye, who joined Red Bull Racing as their General Manager back in 2008. Adding fuel to the fire of this rumor is additional speculation that says Mark Martin will play a prominent role, both on and off the track, in this new operation. The rumor mill also says the new team owners will be powered by engines from Hendrick Motorsports which also indicates a move from Toyota to Chevrolet.

There is an element of sense to that when you stop and think about it. Martin will be leaving the #5 Hendrick Motorsports ride at the end of this season. He has been very tight lipped about future plans, but has made it clear that he is not retiring and will be driving "something" in 2012.

Ironically, the Hendrick ride Martin will be vacating this year will be occupied by Kasey Kahne who is currently driving the second Red Bull Toyota on a one year contract while waiting for his new ride in 2012.

The second Red Bull driver, Brian Vickers, has been with the organization since its inception back in 2007. His contract with the team runs out at the end of the season and, in recent weeks, indicated that he considered himself to be a free agent and free to talk to other teams.

Also floating around the NASCAR garage area is a rumor that states former Sprint Cup team owner Ray Evernham may be involved in the future of these Red Bull teams. However, Evernham recently made it clear that he has no knowledge of a potential ownership status with the Red Bull teams. Evernham has been working with Rick Hendrick, in the area of auto dealerships, and would prefer spending his time becoming more involved with Hendrick Motorsports.

In a quote, made to Fox Sports, Evernham commented on a potential Red Bull deal and said "it would depend on the deal and it would depend on whether it was something Mr. Hendrick would want me to do. I just don't have the desire to be on the road 40 weekends per year."

The success of any motorsports operation is based on performance levels as well as the process of crunching numbers. Sadly, for Red Bull Racing, the history here has displayed low performance numbers along with a high cost of operation that comes with owning and sponsoring a two car team in the Sprint Cup Series.

The operation began in 2007 with drivers Brian Vickers and A J Allmendinger. It was apparent early on that this organization was going to begin in a slow growth mode. Vickers entered 34 races that year and failed to qualify for 13 of them. On the track he only had one top five finish, along with five top tens, and finished a dismal 38th in the points.

Allmendinger's debut numbers were even worse. He missed 19 races, due to qualifying speeds, and finished 43d in the final points standings. Allmendinger was released the following year and replaced by ex Red Bull Formula One driver Scott Speed. To be fair, a seemingly good idea never materialized and Speed's release from the team came at the end of last year and has become the source of a lawsuit between the driver and his former team.

The fortunes of Red Bull Racing took an upswing during the 2009 season when Vickers gave the team their first ever Sprint Cup win. He backed that effort with four top five finishes, 13 top tens, won six poles and raised his average finish ratio to a respectable 17.3. He also got his team into the line up for the Sprint Cup Chase that year.

Sadly the team took a staggering blow during the 2010 season. After making 11 starts in the new season, Vickers had to withdraw from his driving duties due to serious medical issues. It was eventually announced that the medical malady were blood clots severe enough to warrant heart surgery.

Red Bull Racing somehow soldiered on during last season. They replaced Vickers, in their #83 Toyota, with a variety of drivers while hoping that Scott Speed would show some signs of performance life in their second team car. It turned out to be a very long year.

When it was revealed that team owner Rick Hendrick was looking for a one year ride for driver Kasey Kahne for the 2011 season, Red Bull Racing was only too happy to jump on the offer and accommodate him. Meanwhile a healthier Vickers was now back at full strength and ready to resume his NASCAR career. Red Bull Racing was hoping for their biggest season ever.

In direct comparison are the numbers from Red Bull's other team ownership effort: their two teams in Formula One racing. That operation began in 2004 and has managed to improve with each passing year. This was especially true of the 2010 season when Sebastian Vettel won the F1 driver's championship, along with five grand prixs, while team mate Mark Webber won four grand prixs. So far in 2011, Vettel has a healthy lead in the points and appears to be on his way to a second title while Webber is third in the championship standings. Red Bull also has a healthy lead in the coveted constructor's points championship.

Compared to the F1 numbers, Red Bull Racing's NASCAR operation has to seem like a complicated jigsaw puzzle with some pieces missing.

There is, of course, going to be some collateral damage from Red Bull's departure from NASCAR. Chief among them is a loss of jobs once occupied by the members of these two teams. There has already been reports that said some of the Red Bull crew members were having private conversations with other team owners during the Michigan weekend.

This news will likely cast a dark shadow over the potential career of Red Bull development driver Cole Whitt. Already being referred to as NASCAR's next possible real deal, Whitt has been driving a Stacy Compton owned Chevrolet, sponsored by Red Bull and Fuel Doctor, in the NASCAR Camping World Truck Series. So far the young phenom has a pair of top five finishes along with five top tens and is ranked second in the series' points only 20 markers from the top. He's also leading the Sunoco Rookie Of The Year standings as well. Many observers feel his first series win is literally around the corner. Here's hoping there will be a way for Red Bull to continue to back his very bright future.

The shame of this news is the fact that Red Bull is such a strong influence in the international motorsports community as well as many other sports. Here's hoping they will find a way to maintain some sort of connection with NASCAR racing perhaps even as sponsors of their original two teams if referenced investor opportunities pan out. After all, sponsoring two cars is a lot cheaper than owning them.