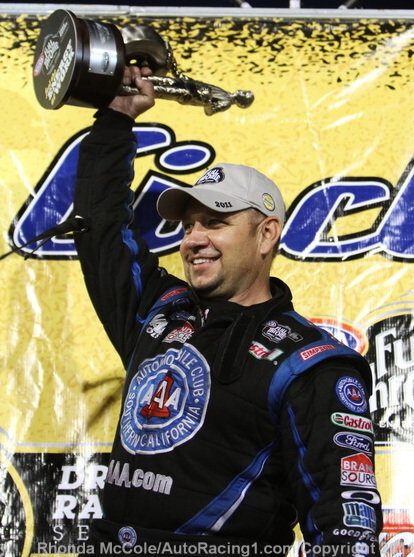 Hight beat out Ron Capps, Funny Car points leader Mike Neff and Jeff Arend and then went unchallenged in the final after “Fast" Jack Beckman spun the tires right out of the gate and pedaled to the finish, easily handing Hight the victory with a run of 4.092 at 314.90 mph to tally his 22nd career final round victory and solidify the national record.

“We finally got Bristol, how about that?" said Hight. “I’ve had trouble with all the races that start with 'B' like Bristol or Brainerd, but we got this one. There’s nothing better than to win this race since it’s now Ford-sponsored. We made eight great runs, and when we needed it the most, Jimmy (Prock, crew chief) pulled it off. I’ve never set any kind of a record before, so that’s pretty cool, too. I know there are no points for a speed record, but it’s still cool to have."

Larry Dixon notched the second in a row for Al-Anabi Racing and their fifth of the season behind Del Worsham’s four prior wins, beating out Antron Brown in the money round.

Dixon moved on to just his third final round of the season after taking down Rod Fuller, Morgan Lucas and Spencer Massey to face Antron Brown, who took opening round wins against Bob Vandergriff, Chris Karamesines and Tony Schumacher.

In their sixth-career final round matchup, Dixon and Brown left the starting line together with Dixon taking a slight edge. Brown stayed in close but couldn’t pull back even as Dixon moved out to a four-foot advantage at the line with a run of 3.836 at 318.09 mph over Browns 3.851, 306.19.

“Great job by the team, for one," said Dixon, who now trails Worsham by 31 points in the Top Fuel standings. “Since the beginning of the year, even last year, I think we've had a great car, but for one reason or another, we haven't been able to get to the winner's circle and last [race], that was all on me. This weekend, it's Father’s Day. It's unbelievable from that standpoint. It's been so long I don't even think this tower was built the last time I won at Bristol. I'm very elated. I'm really, really happy."

In her first final-round showing of the season, Enders jumped out to an early lead but lost power down the stretch and lost out on a chance to become the first woman to win in the Pro Stock division as Edwards powered past to take the win with a 6.685 at 205.79 mph.

“We made some ugly runs, and somehow we were able to turn the win light on," said Edwards, who won out over Richard Freeman, Vincent Nobile and Greg Anderson to get to the final round.

“Some days, no matter how bad you do, you still win. That’s the kind of day we had today. Congrats to my team. They fought hard. This car has given us so many headaches. I hope we can build on this and something good will happen."