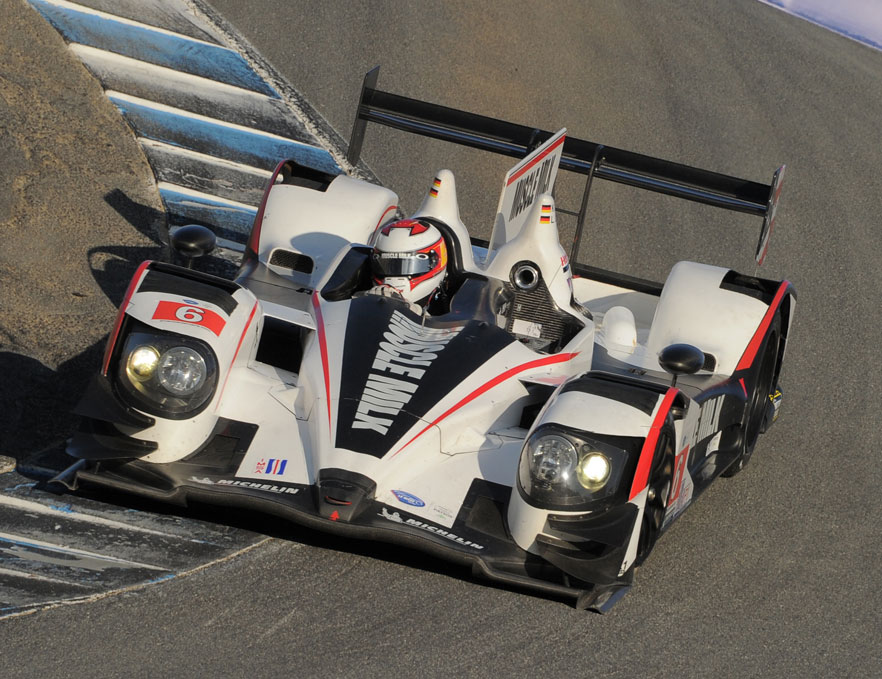 One round removed from its first victory of the season in the American Le Mans Series presented by Tequila Patron, Muscle Milk Pickett Racing set the fastest time Thursday in testing for the American Le Mans Monterey presented by Patron. Lucas Luhr posted a best lap of 1:16.88 (104.788 mph) in the Honda Performance Development ARX-03a prototype he shares with Klaus Graf for Saturday’s six-hour race at Mazda Raceway Laguna Seca.

Graf and Luhr won just a few hours down the road at Long Beach in the previous ALMS round. The pairing will try for their first Series victory together in Monterey.

Corvette Racing picked up where it left off at Long Beach with a 1-2 finish in GT on Thursday. Oliver Gavin set the quickest time at 1:23.894 (96.035 mph) in the Corvette C6.R he drives with Tommy Milner. The pairing won last time out in Long Beach, and Gavin found himself 0.320 seconds quicker than Jan Magnussen in the second Corvette. He drives with Antonio Garcia.

Kyle Marcelli made his final lap count for Merchant Services Racing. The young Canadian – last year’s Prototype Challenge pole-winner – set the fastest time in the class Thursday with a lap of 1:19.710 (101.076 mph). Marcelli – driving his ORECA FLM09 with Lucas Downs and Dean Stirling – was 0.847 seconds clear of the PR1/Mathiasen Motorsports’ duo of Butch Leitzinger and Ken Dobson.

Green Hornet Racing’s Porsche 911 GT3 RSR of Damien Faulkner, Sebastiaan Bleekemolen and Peter LeSaffre was the quickest GT Challenge entry with a lap of 1:29.109 (90.415 mph). The top three cars in class were within 0.118 seconds.

The first official practice session is set for 10:50 a.m. PT on Friday with qualifying scheduled for 4:45 p.m. PT.

The Series’ website offers additional content such as live in-car cameras, and timing and scoring for all users around the world. Viewers outside the U.S. can watch the Monterey round and all ALMS races live on ALMS.com.

Franck Montagny, Level 5 Motorsports
No. 055 HPD ARX-03b (P2)
First race at Mazda Raceway since winning P2 in 2008
“The car is OK. I’m very surprised by the engine. There is no power on the long straights and it was tough to get past GT cars. But the rules have changed since I was last here, and that is the reason. Mazda Raceway is a very good track. I enjoyed it – especially when we won P2 in 2008 – and I hope it is still good this weekend."

Johannes van Overbeek, Extreme Speed Motorsports
No. 01 Ferrari F458 Italia (GT)
Biggest challenge of the test day
“The toughest part is trying to figure out what makes the car misbehave on the track; is it surface-related or setup-related? The track seems to oversteer and understeer in different areas. You have to be patient and not try to make too many big changes and go off the wrong way with your adjustments."

Tom Kimber-Smith, CORE autosport
No. 06 ORECA FLM09 (PC)
On his first time at Mazda Raceway
“It’s a very busy place. I think traffic is going to be a big issue. The Corkscrew is interesting but it was always dirty. Every lap it was getting worse and worse. My last run there was no tarmac, only sand. During the race that’s going to be difficult. But it’s a good fun track to drive – no rest. You’re always doing something which is unusual for me because European circuits have long straights with plenty of time to think, but here it’s just straight into the next corner. At the moment it’s really hard to have an opinion as it’s still going on in my mind. But we seem to be fairly quick, which is good, and the car was improving. I’m looking forward to getting back out there tomorrow."