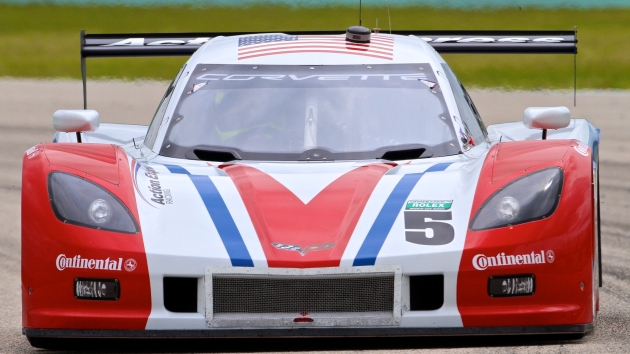 It took David Donohue only two laps to post the quickest time in the first of two GRAND-AM Rolex Sports Car Series practice sessions on Friday at Homestead-Miami Speedway and that time held up as the fastest of the day in preparation for Sunday’s Grand Prix of Miami (SPEED, Live, April 29, 1 p.m. ET).

“We tried to go quick today," Donohue said. “Our main goal was to see how the tire plays out. Having a good car on old tires is going to be the key here, although having fresh tires – if there’s a late-race caution – could be a game changer."

Richard Westbrook followed up his first Rolex Series Daytona Prototype victory at Barber Motorsports Park last month with the second-quickest practice time at Homestead. His best lap – which was also turned in the morning session – was a 111.269 mph (1:14.414) in the No. 90 Spirit of Daytona Racing Corvette DP he shares with Antonio Garcia. Jon Fogarty was third in the No. 99 GAINSCO Auto Insurance Corvette DP at 111.180 mph (1:14.474).

The top four Daytona Prototype speeds of the day were turned in the morning session. Ryan Dalziel was quickest in the afternoon and fifth overall at 110.596 mph (1:14.867) in the No. 8 Duncan/Motorola Ford/Riley.

The fastest GT class speeds were also posted in the morning and the best one came from West Palm Beach’s Guy Cosmo in the No. 03 Tequila Patron Ferrari 458 Italia Grand Am. Cosmo’s best run was a lap at 103.649 mph (1:19.885) for the Extreme Speed Motorsports team based just up the road in Stuart, Fla.

Bill Auberlen – who owns five GRAND-AM victories at Homestead – was second in the No. 94 Turner Motorsport BMW M3 at 102.970 mph (1:20.412). He and co-driver Paul Dalla Lana won both the Rolex Series GT class and the GRAND-AM Continental Tire Sports Car Challenge Grand Sport (GS) race last year at Homestead. Jeroen Bleekemolen was third in GT on Friday at 102.823 (1:20.527) in the No 68 Grupo SK 18/ADE Cargo/Solar Cargo/Venezuela/Avior Airline Porsche GT3.

Qualifying for the Grand Prix of Miami takes the green flag at 12:45 p.m. ET on Saturday, with the race scheduled for 1 p.m. ET on Sunday.