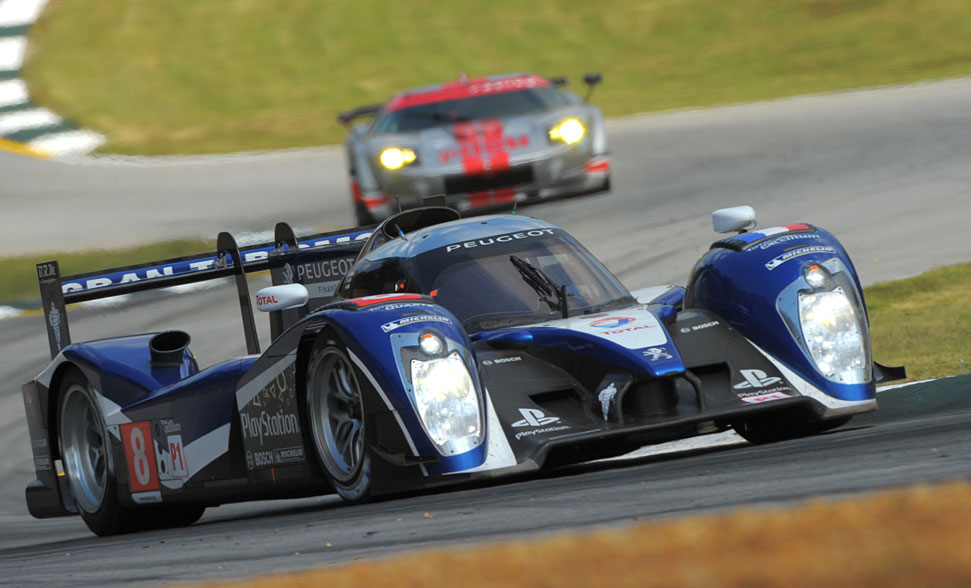 Two-time and defending race-winner Stephane Sarrazin led a Peugeot 1-2 in the first official practice for Petit Le Mans powered by Mazda on Thursday morning at Road Atlanta. The Frenchman posted a best lap of 1:09.603 (131.374 mph) in the diesel-powered Peugeot 908 that he will drive with Franck Montagny – Sarrazin’s teammate the last two years – and Alexander Wurz.

The session was halted for approximately 30 minutes following a heavy crash between Olivier Pla’s Oak Racing Oak Pescarolo prototype and JDX Racing’s Will Langhorne. Track and IMSA officials had to repair barriers and fencing as a result of the incident.

Marino Franchitti, co-winner the last two years in LMP2, was quickest in the class for Level 5 Motorsports. The Scotsman set a time of 1:14.278 in the HPD ARX-01g that he is driving with Luis Diaz and Scott Tucker. Franchitti was nearly a second quicker than Signatech Nissan’s Lucas Ordonez. Mark Patterson was third-fastest for United Autosports in his Oak Pescarolo-Judd at 1:17.619.

The top nine cars were within 0.749 seconds of each other. BMW Team RLL’s Dirk MÃ¼ller, who clinched the ALMS GT championship two weeks ago at Mazda Raceway Laguna Seca with Joey Hand, was second-quickest in Thursday’s test at 1:20.258 in his BMW M3 GT. Former Ferrari F1 pilot Giancarlo Fisichella was third in class with a time of 1:20.493 in AF Corse’s Ferrari F458.

The LMP Challenge class was just as close as GTE Pro. CORE autosport’s Rudy Junco set the fastest lap of 1:17.429 on his final time around the circuit in the ORECA FLM09 that he is driving with Gunnar Jeannette and Ricardo Gonzalez. Genoa Racing’s Dane Cameron, a late addition to the team, was just 0.206 seconds back. Eric Lux in the second Genoa entry sat third at 1:17.731.

Julien Canal led GTE Am for Larbre Competition’s Corvette C6.R with a lap of 1:22.167 in the car he will share with Patrick Bornhauser and Gabriele Gardal. Michael Wainwright was second in Gulf Middle East AMR’s Aston Martin Vantage at 1:25.963.

In GT Challenge, Jeroen Bleekemolen set the quickest time for Black Swan Racing in the Porsche 911 GT3 Cup he will share with Tim Pappas and Sebastiaan Bleekemolen. He was a scant 0.075 seconds clear of Alex Job Racing’s Leh Keen.