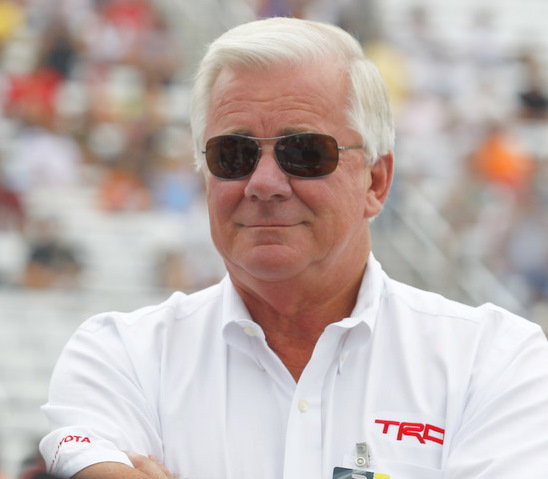 It's a major stunner for the NASCAR stock car world — Lee White's sudden decision to step down as the man in charge of Toyota's racing operations.

And it comes just as Toyota has pushed to the top of this sport.

Chevy's Jimmie Johnson may be atop the Sprint Cup standings, but the three most consistently impressive drivers this season are Joe Gibbs' Toyota men, Kyle Busch, Matt Kenseth and Denny Hamlin.

And Hamlin is the early favorite to win next weekend's Pocono 400, at one of his best tracks.

Making White's decision so surprising is that in the announcement Toyota executives had no one lined up to take the job.

White, who is a 15-year veteran with Toyota's racing operations, is expected to serve as "special adviser" the rest of this season.

While there have been a number of Toyota engine problems lately, including three failures Sunday at Dover, and the Kenseth-NASCAR Kansas engine controversy, there is no denying Toyota's speed this year: Kyle Busch is the tour's lap leader, 955 laps led, and Kenseth is number two, 922 laps led. Altogether Toyota drivers hold five of the top 10 spots on the lap-leader scoreboard, and they've led well over half the laps run this spring.

Kenseth, Toyota's newest driver, has been most impressive, in qualifying, in speed, and in winning — Las Vegas, Kansas and Darlington already.

Busch, long one of Toyota's NASCAR mainstays, has wins at California and Texas, and he was dominating the Charlotte 600 when that TV camera line fell on the track and ripped open his front fender.

Over the past year Toyota drivers have won 12 of the 36 races. So why would White be stepping down?

Toyota issued a brief statement that "Due to family health care needs, White will step down from his daily duties and will vacate the position of president and general manager of TRD, effective immediately."

White says "I have been planning and working toward retirement at the end of this race season in December.

"I have been offered, and accepted, an opportunity to perform a reduced amount of duties from my home office. This generous arrangement afforded to us by the company will allow me to attend to personal family priorities."

More of this story will likely come out at Pocono Raceway, this week's NASCAR tour stop.

While much of the spotlight has been on Toyota's engine problems, perhaps more focus could be put on the Kenseth-NASCAR-Kansas engine controversy. NASCAR inspectors, after Kenseth's Kansas romp, said one of his engine connecting rods was lighter than rules allow, and NASCAR officials hit the Kenseth-Gibbs team with a major set of penalties.

Details about the Kenseth-Kansas engine have been extremely limited. However it does not appear the violation was speed-enhancing.

NASCAR's heavy penalties for that engine violation were mostly overturned on appeal. However the public relations damage to Gibbs and Toyota was already done. Gibbs was personally upset with the charges, pointing out his teams have no control over engines, that Toyota's California shop provides all engines.

Toyota itself is a company that is extremely concerned about its image. So a similar situation with a Ford or General Motors team might not generate as much corporate blowback.

How much that situation might bear on White's decision is not clear. While the feeling at Richmond, while the Kenseth-NASCAR situation was still festering, was that White would be under considerable pressure of some sort, since he was the point-man for the questioned parts, after the appeals panel rejected the harsh penalties a few days later, it appeared that White had weathered the storm.

Indeed last week at Charlotte there was no indication at all of any lingering discord. Meanwhile the Toyota executives over White — Les Unger and Ed Laukes — have yet to weigh in on the move. Unger would appear to be the man who will decide on a new NASCAR boss.

Regardless of the reasons, taking White out of the NASCAR equation is a major blow for Toyota, not just because of his technical expertise but more so because of his racing savvy. Whoever takes the position will have the sometimes unenviable job of dealing with NASCAR officials.

Darrell Waltrip, who works closely with Toyota, says the car maker will have a hard time finding someone to fill White's shoes.

"When Toyota decided to get into Cup racing, they didn't have anything to start with," Waltrip says "No engine, no vehicle, no nothing.

"Toyota didn't have a V-8 push-rod, normally- aspirated engine. So that engine had to be built from scratch, from a blank sheet of paper. Lee oversaw every bit of that."

White brought Toyota into stock car racing after many years in the Indy-car world. Before that, White worked with Ford's Jack Roush on Roush's IMSA sports car program, where Roush first came to national prominence.

"He has been a major player in engine development for more than 20 years and has contributed more to auto racing than most people realize," Waltrip said.

"Any time one of your key guys steps aside, you always wonder who will fill those shoes.

"There are a lot of capable people, but I'm sure Lee will be looking over their shoulder.

"I can't imagine he won't have some role down the road. But it will be hard to fill his shoes.

"Lee has a tremendous reputation and legacy…and it's going to be a tall order to succeed him. I wouldn't want to be that individual." More at MikeMulhern