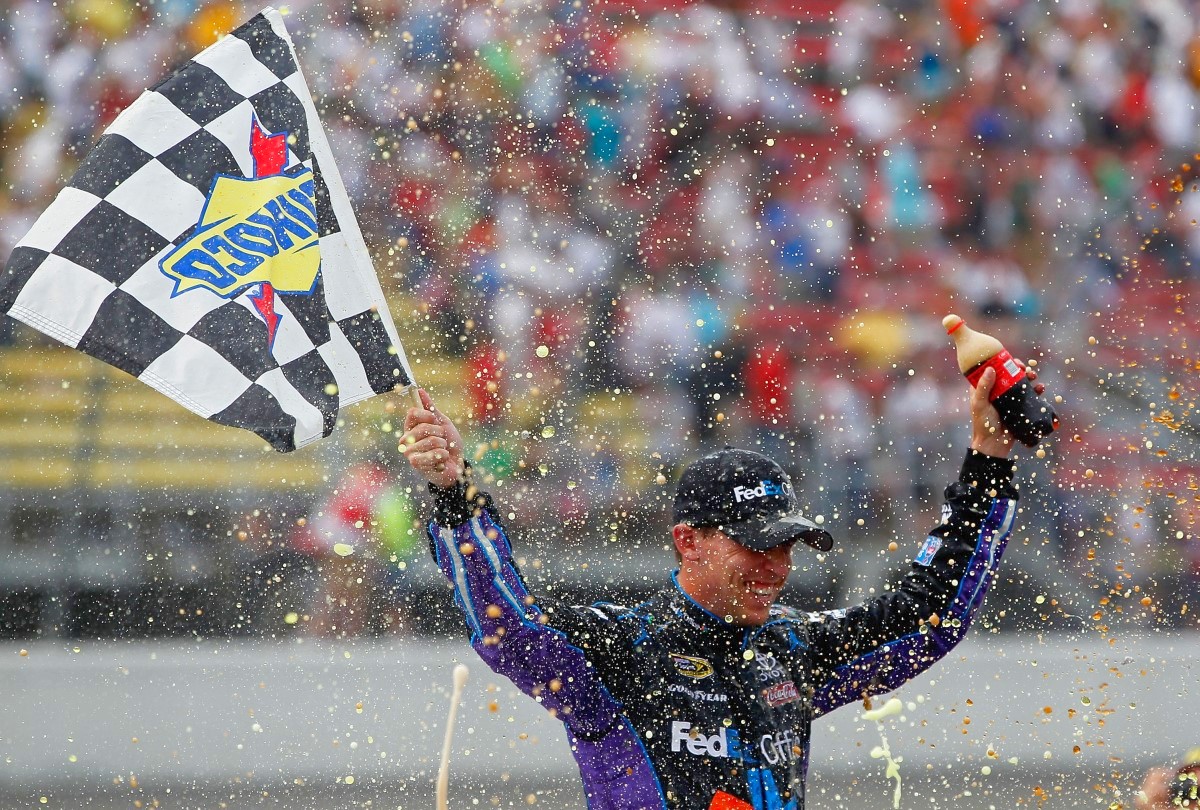 Denny Hamlin’s declaration this time last year was clear, simple and undeniable: “All we do is win."

That bold proclamation came after he captured the NASCAR Sprint Cup race at Michigan International Speedway last June, his fifth of what would be a total of eight triumphs in 2010. It was also his second victory in a row and fourth in the previous eight races.

But Hamlin’s bravado this season has been relegated to the back seat with no victories; his mantra more like, “All we do is come close."

Hamlin found his groove again Sunday winning the Heluva Good! Sour Cream Dips 400 for the second consecutive year. His last three finishes in Michigan have been first, second in August and first again today when he edged Matt Kenseth by 0.281 seconds – about four car lengths.

“Everyone knows that we’ve been strong and today we didn’t look as strong as we normally do here, but we got it working there at the end," Hamlin stated after his 17th career Sprint Cup win. “We made a magic adjustment and the car just took off. This is the point of the season where we really need to start hitting our stride. Hopefully we’ll have another good 10 weeks before the Chase starts."

Hamlin has been good but not quite good enough, according to his own perspective. He now has five Top-10 finishes and four top-five finishes and went from 12th to ninth in the Sprint Cup point standings.

While Hamlin dominated the June race at MIS last year he had his hands full and his rearview mirror bursting with images of Kenseth following a restart with five laps remaining following a brief yellow caution period instigated by Dale Earnhardt Jr.’s second scrape with the wall.

Kenseth tried to pass Hamlin on the high side on the last lap and when that didn’t work he tried a low route, but that came up short, also.

“We had a really fast car and thought we had a good chance to win today," said Kenseth. “I got a bad restart at the end and I got back to Denny but I couldn’t get around him. We were kind of slow for about 10 laps on each restart and then it seemed like we were the best car from 10 until we needed fuel. I just didn’t have enough time to get around him. I tried everything I could and I just couldn’t figure out how to do it."

A costly restart snafu late in the race cost Kyle Busch an opportunity at victory, but his third-place finish gave Joe Gibbs Racing two of the top-three finishing positions.

“We didn’t have a great day with that restart but we turned it into a pretty good one," Kyle Busch said.

“The 11 team (Hamlin) really, really helped us a lot last week (Busch finished third at Pocono) and I feel we helped the 11 team a little bit this week. It just goes to show we’re doing something right and we’re able to share information, which is good."

Earnhardt ran strong over the first half of the race and appeared to be a contender for the victory, his first since winning at MIS in June of 2008.

Martin said, “I don’t have a history of having problems and I don’t think I have one now. I think we’ll get it sorted out. I feel like I give everybody on the race track respect. I made a mistake."

Five-time defending champion Jimmy Johnson also had his difficulties, coming quickly and decisively. He spun out just eight laps into the race, had to have a sway bar replaced, fell two laps behind and couldn’t make it up, finishing 27th. It dropped him from second in the points race to fifth.

“We got turned around early and ground the sway bar off the right front and we lost a couple laps from that and were just kind of in a hole at that point and couldn’t get caught back up. It’s just part of it," Johnson explained.