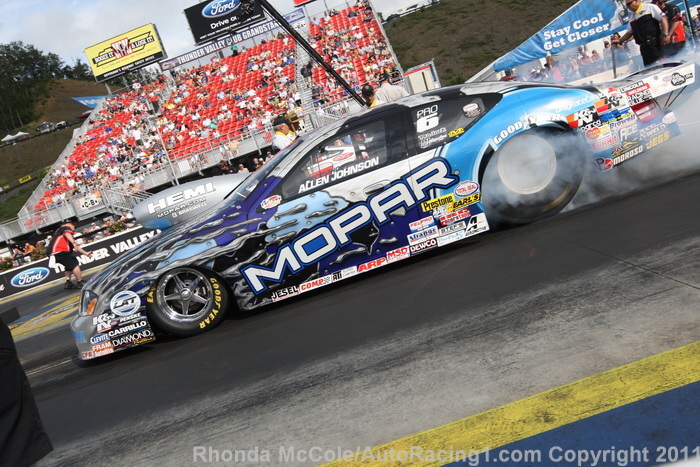 After rain soaked the track between the third and fourth qualifying sessions, the track temperatures dropped and records began to fall, with new records being set in Top Fuel and Funny Car.

Tasca backed up his earlier run from Friday with 4.056 at 314.31 mph in the final qualifying session to break both the track ET and speed records and nail his second career no. 1 qualifier spot.

“I predicted this last night, although it didn’t end up exactly the way I thought it would," Tasca said. “In (the third qualifying session) we (dropped a cylinder) and it smoked the tires. We knew that we had a car that had run a 4.10 last night and (after the rain) we were thrilled to get another shot at it. By the time we ran we were seventh or eighth and when we pulled up I told Chris (Cunningham, crew chief) that we had nothing to lose. He said, ‘Don’t worry, it’s gonna go fast.’ It’s great having the track E.T. and speed record but we’re here to take that trophy home. I knew we were going to at least run 4.08 or quicker. We’ve been waiting four years for that run."

Wilkerson’s son Daniel qualified in the bump spot and will face Tasca in the opening round. Brian Thiel was the only driver to miss the field.

In Top Fuel, Bernstein saved his best for last with a record setting run with his final pass of the day, posting a track-record low ET of 3.828 at 316.52 mph to grab the top spot away from Larry Dixon and earn his first pole of the season and 14th of his career.

“This felt really great," Bernstein said. “We knew that (Dixon’s crew chief) Alan Johnson was going to throw everything after it, and I figured that my Friday night time wasn’t going to stand up under the cooler conditions after the rain delay. But my guys, (crew chiefs) Todd Smith and Donnie Bender, told me that we were going to go for it, and my dad (team owner Kenny Bernstein) just told me to make sure and keep it in the groove. We really feel that we have a real race car right now. There’s a lot of satisfaction knowing that we can go fast when we really have to. It’s a good feeling to have someone take the No. 1 spot away from you and then get it back."

Allen Johnson jumped up from the third qualifying spot to nab the top spot in the final Pro Stock qualifying session, pairing with Mike Edwards in the final run of the day and beating out the defending event winner with a 6.668 at 206.89 mph to win his first no.1 qualifier of the season and 16th of his career.