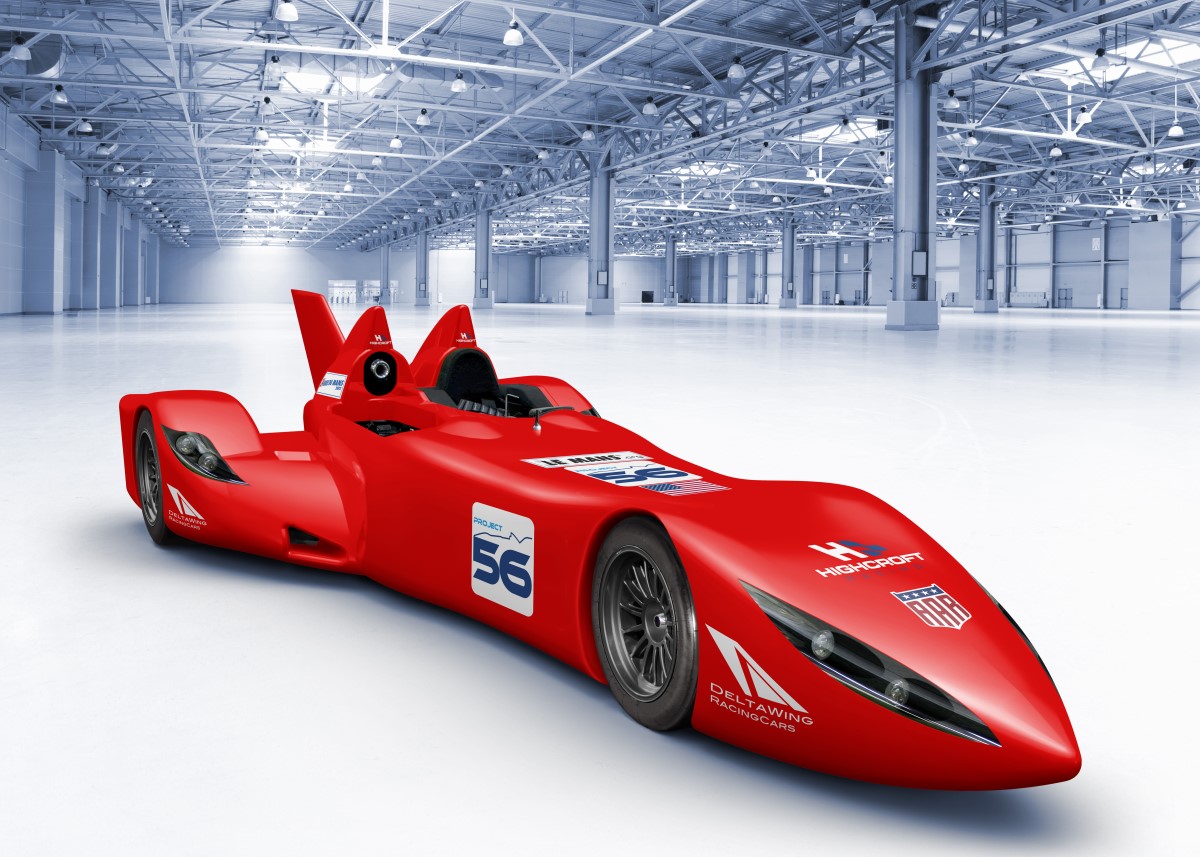 Some of the biggest names in American motorsport will join forces for the 2012 24 Hours of Le Mans to showcase a unique concept demonstrating extreme performance with half the weight and horsepower of a traditional racing car.

The group has received an invitation from Le Mans 24 Hour race organizers, the Automobile Club de l'Ouest to contest the 2012 race as an additional 56th entry.

The 56th place on the grid is reserved for a technologically innovative car to participate “outside the classifications" – a vehicle showcasing new applications and unique technologies previously unseen in the world’s greatest endurance race.

While racing cars have traditionally strived for increased performance through gains in horsepower and aerodynamic downforce, the DeltaWing concept concentrates on exploiting efficiency gains found outside contemporary regulations to reduce fuel consumption without reducing performance.

The new and experimental car is targeting competitive performance with only half the horsepower of the outright contenders. It does this through halving the amount of aerodynamic drag of traditional racing cars as well as a similar reduction in weight.

The Project 56 Group is in discussion with engine partners to provide a 1.6-liter turbocharged power plant for the project – producing approximately 300 horsepower.

The car will be unlike any previously seen at the 24 Hours of Le Mans. The car features a slender nose with extremely narrow front track – minimizing the horsepower required to push the car to speeds of 200mph around the 8.5 mile circuit.

Eliminating the use of traditional wings, downforce for the DeltaWing is generated solely beneath the car by the contoured underbody.

The DeltaWing selection was revealed today at the ACO’s annual press conference coinciding with this weekend’s 24 Hours of Le Mans event.

Construction of the new machine will begin next month at Gurney’s California facility. The Highcroft Racing team will begin track testing of the new car later this year.

The 24 Hours of Le Mans is the world’s oldest and most famous endurance race. First held in 1923, the event has attracted the world’s finest automotive manufacturers and drivers.

VINCENT BEAUMESNIL
Directeur Sports
Automobile Club L‘Ouest
“In 2010 the ACO Sporting Committee decided to create the garage #56 to promote new technologies. When the ACO Management met the representative of the Delta Wing project everybody thought immediately that it would be a high quality project for the Le Mans experimental entry in 2012.

“The interest in this project is based on the optimization of all factors that have an impact on global energy consumption and efficiency of the car : weight, power, drag.

“The ACO want to give the opportunity to evaluate each technology, and this project shows that ahead of hybrid, bio fuel or electric technology – we can explore other ways to improve efficiency."

BEN BOWLBY
“The secret to the DeltaWing car is simplicity and efficiency.

"To achieve the dramatically reduced carbon footprint we have looked at ways to reduce weight and drag, as well as the total number of components required to build the car.

“Essentially, the car has a three-point layout with the narrow front and wide rear track – as opposed to the rectangular layout of contemporary racing cars. We have a delta-shaped car that allows us to take a different route to achieving our performance goals as well as enhancing driver protection.

“We need much less chassis torsional stiffness for handling performance so we don’t need to use such stiff and brittle materials in the chassis. We can use light, tough and energy absorbing materials instead.

One of the attractions of Le Mans is the incredible variety of vehicles in competition – with different fuel types, open and closed cockpits, GT cars – there are lots of different solutions and they all run together during the event.

"What is particularly impressive is the fact the ACO decided to create the 56th entry where a car that is outside the regulations is invited to participate to showcase an even greater diversity of automotive engineering concepts.

"It’s an industry runway, it shows what the future may look like. We are lucky to receive this entry and amongst all the other diversity, the DeltaWing will be very much in the spirit of Le Mans.

“The 56th entry is really a golden opportunity for us because it gives us the chance to make a significant change and “race" a car that doesn’t comply with the existing rule book.

“We really have to applaud the ACO for having the foresight to create this opportunity for an entry like ours. We believe this is a true automotive innovation which could be the catalyst for changing the way people look at not only racing car design, but automotive design as a whole."

DUNCAN DAYTON
Owner
Highcroft Racing
“This is an amazing opportunity.

“To take a car like this with a totally innovative design to Le Mans and run before a worldwide television audience of more than 600 million people is an incredible story.

“This will be the first legitimate test with 55 other cars on the track – it will be a huge challenge but one that we are looking forward to.

“The DeltaWing project really represents a unique opportunity for all automotive industry sectors; the OEMs and suppliers, whether it be engines, drivetrains, lubricant and fuel companies, tire manufactures – it is such an innovative concept that it provides an incredible platform for them to market and prove their capabilities.

“In my opinion, it has the potential to be one of the most significant developments in motor racing in 50 years. It is so new and exciting, and such an interesting departure from the traditional race car development path – it is highly relevant to the future.

“Given that the world is concentrating on efficiency and green technologies in an attempt to achieve sustainability, this project in my opinion will help promote the direction that is being adopted throughout the entire automotive industry."

“The combination of proven items that make up the character and capabilities of the DeltaWing car make it an extremely exciting project.

“It weighs half as much current cars, it burns half as much fuel, uses much less tire and goes the same speed because of the exceptional aerodynamics and low drag.

“Almost every aspect of the car is really basic engineering but the combination of the total package should be astoundingly good.

“After looking at the project and the technical aspects of the car I was asked if we were selected to compete at the 24 Hours of Le Mans, would I like to be involved – or in our case, would we like to build it.

“I didn’t hesitate for a moment – my response was absolutely yes.

“I have a lot of curiosity and when I first discussed this car with Ben Bowlby I listened closely and tried to shoot holes in what he was saying but I quickly found I wasn’t able to.

“I told him I was very interested. I believe the targets and predictions are valid and now we have been given the green light from the ACO – count me in.

“It has been a very long time since I have been to the 24 Hours of Le Mans – in fact, the last time I was there for the race I won with AJ Foyt and the Ford GT40.

“I certainly am very much looking forward to heading back there next year and seeing our car compete."

“I am extremely proud of the progress that the ACO and the American Le Mans Series have made in showcasing sportscar racing as the global leader in green racing.

“The ACO has proven itself to be a leader in encouraging manufacturers to investigate new technologies to tackle the world’s greatest endurance race.

“Their decision to encourage this forward thinking through the creation of “Garage 56" has been the inspiration and catalyst to bring together some of the biggest names in US motorsport with a view to “how can we do things differently".

“I am delighted to play a role in bringing this project to life as I believe it is one of the most important technical innovations and philosophies displayed in the sport for many years.

“I am also thrilled that the bodywork of the DeltaWing car will utilize R.E.A.M.S. – Recyclable Energy Absorbing Matrix System – the same system debuted on the Panoz Abruzzi earlier this year at Sebring.

“This is a multi-layer composite system that is lighter than carbon fiber, equally strong and can be recycled. Technologies like this will certainly help us achieve our performance goals.

“This entire project is an incredibly exciting opportunity and I am sure the fans will be eagerly awaiting the chance to see the car in action at Le Mans in 2012."

Bodywork: R.E.A.M.S.–Recycle Energy Absorbing Matrix System–the same system debuted on the Panoz Abruzzi. It is a multilayer composite system that is lighter than carbon fiber, equally strong and can be recycled.

— Engine and transmission are “nonstressed members" in the chassis structural design which allows the installation of a wide variety of lightweight powertrains.

— Vehicle weight distribution is necessarily more rearward than traditionally seen, with 72.5 percent of the mass between the wide-track larger rear tires.

— Seventy-six percent of the aerodynamic downforce acts on the rear of the car which has a lift to drag ratio of more than 5.0.

— Unique amongst today's racing cars, more than 50 percent of the vehicle's braking force is generated behind the center of gravity, giving a dynamically stable response.