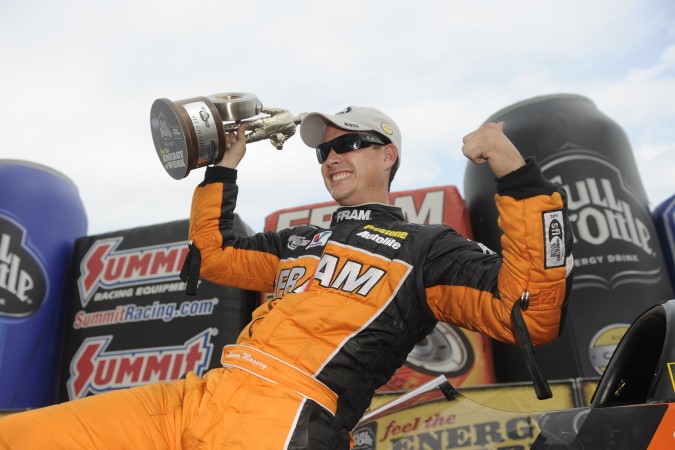 Spencer Massey raced to his second consecutive win of the season Sunday at the NHRA SuperNationals at Old Bridge Township Raceway Park.

Massey drove his Fram/Prestone dragster to a winning 3.821-second run at 319.07 mph to beat Top Fuel points leader Del Worsham on a holeshot. It was Massey’s second consecutive win of the season (Topeka) and fourth of his career.

“It’s awesome to beat the Alan Johnson/Al-Anabi/Del Worsham car in the final," said Massey. “The Al-Anabi car has been on a roll and running killer numbers, so we knew we had to be on our 'A' game, that the car had to run well, and I had to be on my game. I even had a Full Throttle to amp myself up before I got in there."

In Funny Car, Neff held off No. 1 qualifier Cruz Pedregon to grab his second win of the season. Neff drove his Castrol GTX Ford Mustang to a 4.071 at 314.09 mph winning run after Pedregon posted a red-light start. It was Neff’s third career win and fourth consecutive final-round appearance of the season.

“I knew he red-lighted," said Neff. “I was sitting there waiting for the Tree to come down, and I heard him leave and knew he red-lighted because the Tree hadn’t come down yet. I looked over and saw that his bulb was red, then I looked up and saw our win light on. By that time, I had already hit the gas and was taking off and saw our win light on. I wanted to see what it would run, then I was saying ‘Don’t drive over the centerline or something.' Wouldn’t you lose if you did that? Yeah, maybe I should have lifted."

The win strengthened Neff’s points lead over the Funny Car class, and Pedregon fell just seven points from moving to the third spot in the point standings.

Pro Stock’s Johnson held off rookie sensation Vincent Nobile to pick up his first win of the season. Johnson drove his Team Mopar/J&J Racing Dodge Avenger to a 6.689 at 210.64 mph for the win after Nobile posted a red-light start in the final round. It was Johnson’s ninth win.

“It was a dream to have an all-team final round and to have it happen this early in the season is a dream come true," said Johnson, who provides engines for Nobile. “I’m very proud of our engine guys and Mark [Ingersoll, crew chief], who makes the tuning calls. Vincent is a fierce competitor, and I’m sure we’re going to tangle a few more times before this is over."

The win moved Johnson to seventh in the point standings, and leader Jason Line kept control of his lead over the category with his second-round appearance.

“I won my first race here in 2006, so I’ve always liked racing at this track," said Smith. “When I saw these [pewter 60th anniversary edition] Wally trophies, I said to myself I wanted to win at least one this year, so I’m glad I did."

Danny Rowe raced to his first win of the season Sunday during the NHRA Get Screened America Pro Mod Drag Racing Series.

Points leader Khalid Balooshi lost in the first round but kept his points lead after five races for the season. National record holder and No. 1 qualifier Melanie Troxel also lost first round, and New York native and local favorite Mike Castellana moved to seventh in the point standings with his semifinal-round appearance.