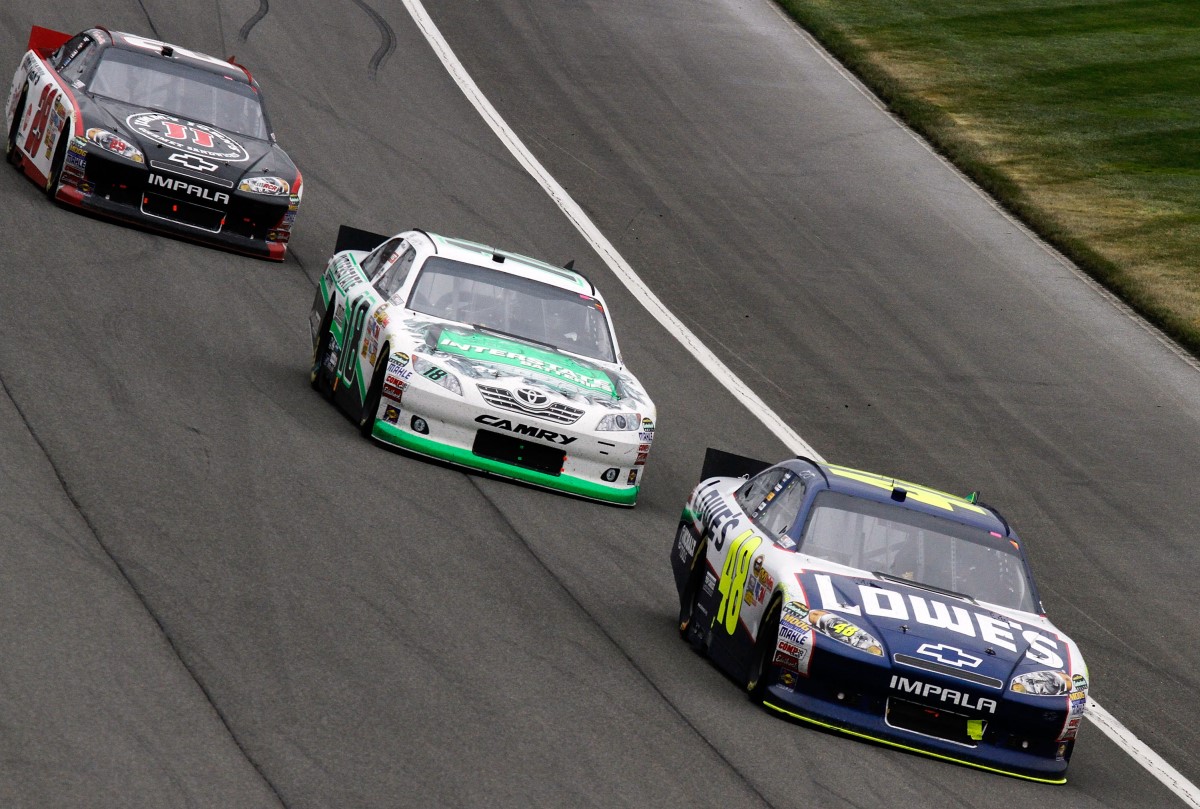 On late Saturday afternoon Kevin Harvick was being interviewed on the Auto Club Speedway's pit road. He had just driven his self owned Chevrolet to a third place finish in the Royal Purple 300 NASCAR Nationwide Series race. After leading a race high 64 laps, Harvick said "I hate to give one away. We just can't seem to get going here, (at the Auto Club Speedway), but I am pleased that we were competitive."

24 hours later Harvick's "get going" problem was resolved and he found himself standing in the speedway's Gatorade victory lane after scoring a stunning last ditch effort win in the Auto Club 400 NASCAR Sprint Cup Series.

Through out much of the Auto Club 400 it appeared that Kyle Busch was going to use his giant broom to sweep a NASCAR weekend for the second time in as many races. Busch led a race high 151 laps and was pretty much formidable all through this event.

But the fourth and final caution flag came, when Bobby Labonte hit the fourth turn wall, with only 13 laps left. That set up a double file, shoot out style, restart between Busch and Jimmie Johnson. The race returned to green flag status with only nine laps left. Busch again jumped into the lead and again appeared to be on the way to the sweep. But Johnson ran him down and, with a low line pass on the front stretch, took the lead with only four laps remaining.

But once again the completely obvious assumption was not meant to be and the Fontana finish wasn't quite complete yet. While Busch and Johnson were racing each hard, Harvick was in third reeling them in. On the white flag lap he moved around Busch to take command of second. Now the battle between the "California kids", Johnson from El Cajon versus Bakerfield's Harvick, was on.

Going into turn four, with the checkers ready to wave in the air, Harvick gave Johnson's rear bumper a light tap. It created just enough racing room for Harvick to pass his race rival on the high side and then slide in front of him coming off of turn four. Harvick literally stole the show in the final 100 yards of the race while an crowd of 88,000 were on their feet cheering the two combatants on.

Harvick scored his first win of the 2011 season, his 15th career win, and his first at the Auto Club Speedway. Of equal importance is the way the win elevated his status in NASCAR's recently reconfigured championship points system. He got off to a terrible start following the season opener at Daytona. In the last four races since then Harvick has moved from 37th to 9th in the standings and is back on track to again make the Chase For The Championship line up.

After collecting his trophy, and a winner's check worth $331,961, "Happy" Harvick said Those guys got to racing side by side and it allowed us to get to them. The more laps we ran on our tires, (to build up air pressure), the better we were. It's pretty cool to win here at home."

Harvick also admitted that he was a little nervous about crew chief Gil Martin's call not to come in for tires during the final yellow flag pit stop opportunity. When asked who makes the final call on those situations, Harvick smiled and said "it depends on what day of the week it is."

Jimmie Johnson called the Auto Club 400 "a great race" and added "If I could have gotten around Kyle Busch one lap sooner that would have made the difference and I would have had the room to hold off the 29, (Harvick). I did everything I could even though I was sometimes sideways. I think I actually scraped the wall while chasing Kyle but, overall, it was a great day for the Lowes team."

After what could only be deemed a disappointing third place finish, Kyle Busch said "sometimes you lose some but it's frustrating to lose one like that. We simply lost some of our rubber grip on the track. But from where we started, (8th on the grid), it's a good outcome."