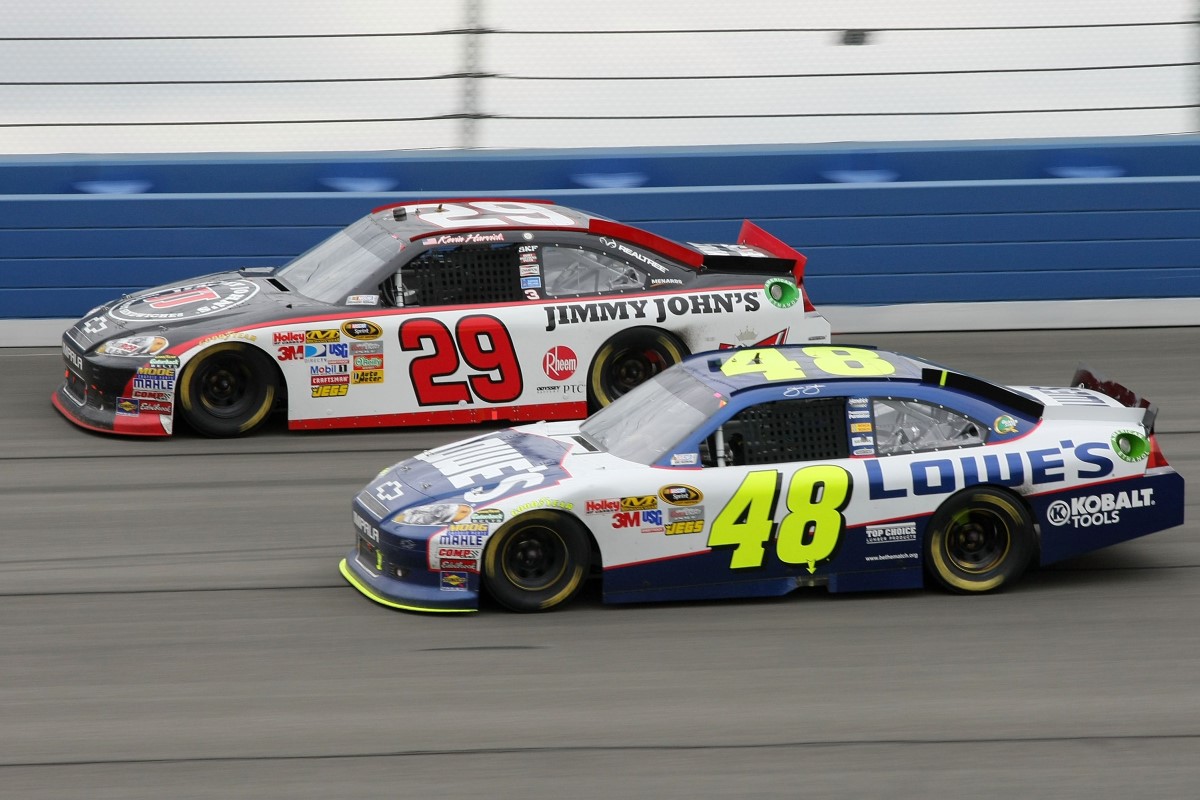 Kevin Harvick, who grew up in Bakersfield—about 150 miles from Auto Club Speedway—needed a last-lap pass of Jimmie Johnson to win for the first time at the 2-mile track, in his 18th attempt.

Harvick won Sunday’s Auto Club 400 NASCAR Sprint Cup Series race, powering his No. 29 Chevrolet to the outside of Johnson’s No. 48 Chevy through Turns 3 and 4 and beating Johnson to the finish line by 0.144 seconds.

Harvick, who restarted fifth with nine laps remaining, surged to the front on the final two laps, passing Kyle Busch and Johnson in the process. The victory was Harvick’s first of the season and 15th of his career and moved him up six spots in the points standings to ninth.

Busch held the lead until Lap 198, when Johnson passed him to the inside after the cars crossed the stripe. The duel between Busch and Johnson allowed Harvick to gain ground.

A caution on Lap 185 of 200, after Bobby Labonte blew a right front tire and slammed the Turn 4 wall, meant decision time for the crew chiefs. With Labonte’s wrecked car blocking the entrance to pit road, the pits remained closed until Lap 189, when Labonte’s car was dragged to the garage by a wrecker.

Busch, Johnson, Tony Stewart, Bowyer, Harvick, Newman and Edwards stayed on the track during the caution, with Kenseth leading a group of cars to pit road.

“Those guys just started to race," Harvick said. “They got side by side, and we were able to pull up in there. The more laps we got on our tires, the better we were, but I was really nervous about that last call—staying out—but it all worked out in our favor, and we were able to make up ground.

“(Crew chief) Gil (Martin) obviously knew that we were better after the tires had air in them (as pressure built during green-flag runs), and it all worked out today."

Johnson’s battle with Busch opened the door for Harvick, who led one lap—the one that counted.

“If I could have gotten by the No. 18 (Busch) a lap sooner, maybe that would have made the difference, and I would have had enough of a margin to hold off the No. 29, but he was rolling on the top," Johnson said. “I did all I could. I was dead sideways. I think I hit the fence one time off of (Turn) 2, chasing Kyle, with the right rear first because it was sliding off the corner."

After a cycle of stops that began when Busch pitted from the lead on Lap 138, Busch held a 6.5-second lead over Stewart, who began to make up ground throughout the ensuing green-flag run. Stewart had erased all but 1.3 seconds of Busch’s advantage when another cycle of green-flag stops widened the lead to 2.5 seconds.

Andy Lally’s spin off Turn 4 on Lap 170, however, brought out the third caution of the race and bunched the field for a restart on Lap 175. Busch and Stewart took the green flag side-by-side, with Busch in the outside lane, and the driver of the No. 18 Toyota pulled away to a half-second lead within three laps.