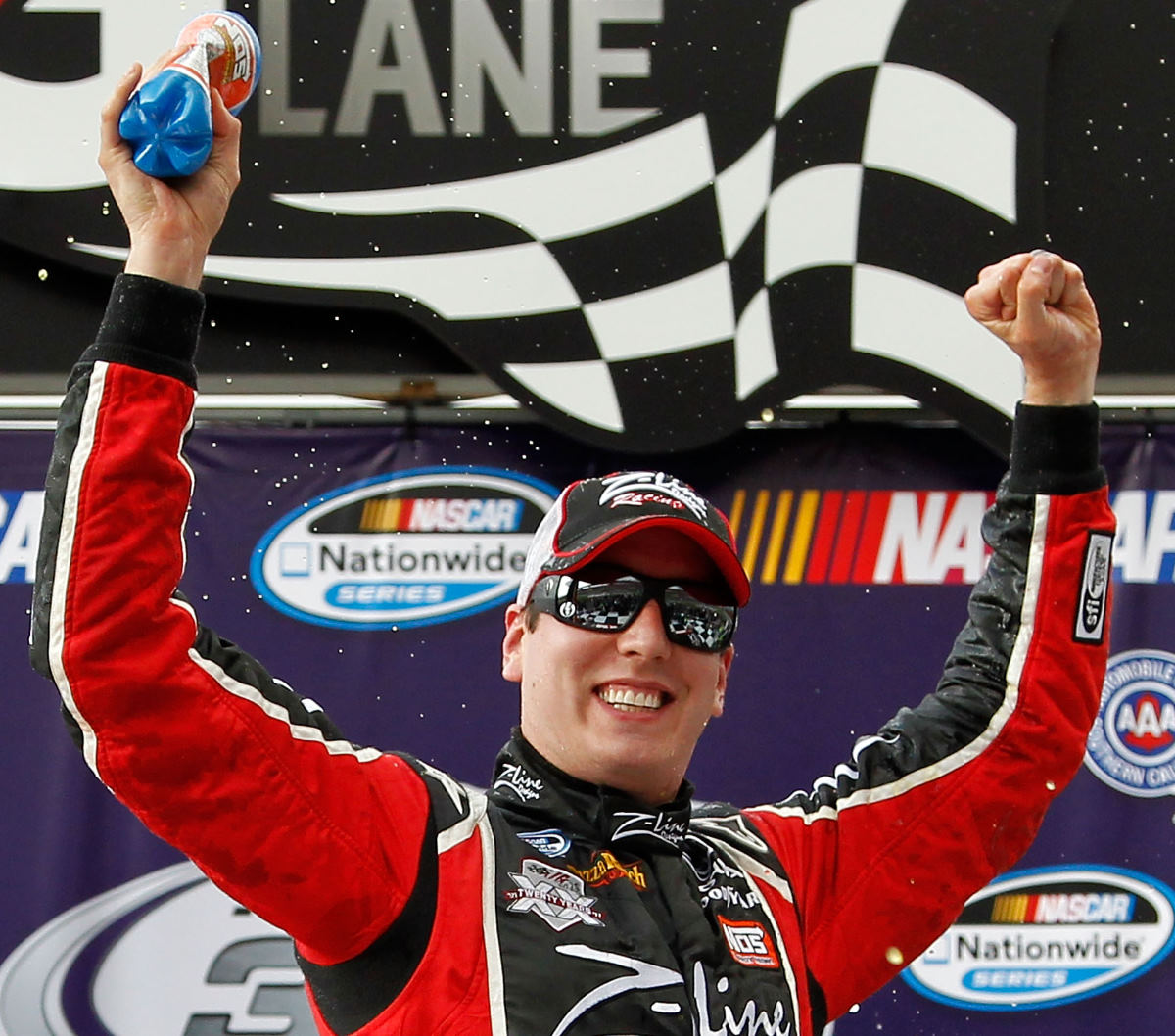 Kyle Busch will be the first to tell you that he stole his latest win in the NASCAR Nationwide Series last Saturday at the Auto Club Speedway. The truth of the matter is he won the Royal Purple 300 following a gutsy, hero or zero, two tire stop call by his crew chief Jason Ratcliff in the final laps of the event.

Nearly all of the pit stops in this race were performed following yellow caution flags which flew five times for a total of 19 laps. The lone exception was the final round of stops, under the green, when nearly all of the lead lap teams needed a little extra fuel to finish the race. Kevin Harvick and Carl Edwards surrendered the race lead to Busch and came down pit road to take on gas and four tires. With 15 laps left in the race, Busch entered pit road for his final stop. That's when Ratcliff made the two tire call that had his driver exit pit road still leading the race. He won the race despite nudging the backstretch wall on the white flag lap which reduced the margin of victory to a mere 0.713 seconds over race rival Carl Edwards.

Busch continues to create amazing numbers in the NASCAR Nationwide Series. Last Saturday marked his 46th series win, in 207 starts, and his third win of the still young 2011 racing season. The Royal Purple 300 also marked Busch's fifth series win at the Auto Club Speedway, his third Fontana win in a row and his fifth win in six starts at the southern California two mile oval.

After taking his famous ceremonial bow in front of the fans after the race, Busch parked his Z Line Design/Joe Gibbs Racing Toyota in the Auto Club Speedway's Gatorade victory lane and said "we stole this one. We don't deserve it, actually I should say the car doesn't deserve it." Commenting on his final green flag stop of the race, Busch said the credit goes to Jason, (Ratcliff). He told me we're not going to win this race taking four tires. Let's gamble and take two."

Commenting on the rather hair raising moment during the final lap, the race winner said " I ran at the top of the track much of the race. Every time I ran a lower line I lost speed and positions. After the final stop I had to return to top of the track to regain speed. I got a little too high, got into the marbles and nudged the wall."

Carl Edwards, who led the race seven times for 48 laps, brought his Roush Fenway Racing Ford home in second and said "I really needed a caution to win this race. Kyle and the #18 guys really did a good job. That call for the two tire stop was just too much to overcome."

Kevin Harvick led the Royal Purple 300 seven times for a race high 64 laps in his Rheem Pool and Spa Heaters/Kevin Harvick Inc Chevrolet. Following his third place finish Harvick said "I hated to give it away, we can't seem to get going here. I am pleased that we were so competitive. The team really worked hard to make the car so competitive and that's all we can ask for." With a wry smile on his face, Harvick also said "I hate to see that thing, (Busch's #18 Toyota), in victory lane."

Ricky Stenhouse Jr garnered a lot of high praise for this strong run and fourth place finish at the Auto Club Speedway. The young driver left California the new series points leader and holds a six point advantage over Jason Leffler. After the race a very happy Stenhouse said "we have been consistent, our cars have been fast and we have a lot of momentum. I just hope we can keep it up to be around at the end of the year."

Elliot Sadler brought his Bad Boy Buggies/Kevin Harvick Inc Chevrolet to a fifth place finish and seemed very pleased with the effort in light of the fact that he started the race from 34th. "I'm really proud of my guys," he said adding "we had a good car, good pit stops and we had a really good points day."